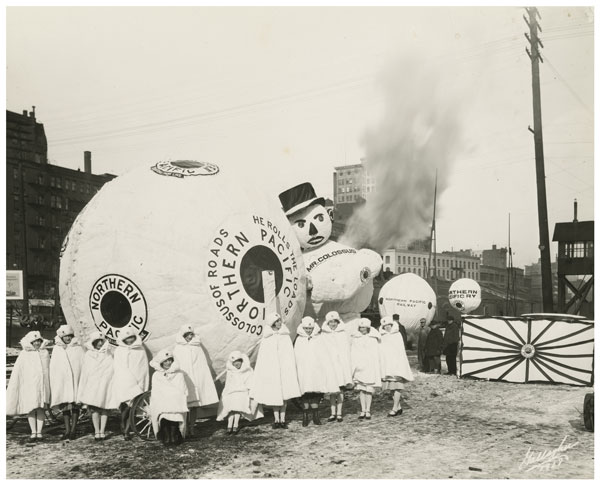 A winter carnival all our own

There’s been a St. Paul Winter Carnival every year, going back to the 1880s, right?

While it’s true that there has been an unbroken string of carnivals since World War II, before that there were gaps. Halfway through the longest of them—from 1917 to 1937—our area staged its own frosty frolic.

In 1928, local businessmen led by Joe Shiely started a Midway Winter Carnival with the support of about a dozen community groups, including those from Lake Park (Como), Newell Park, and north and south St. Anthony Park.

Shiely, whose company extracted sand and gravel from pits it worked on both sides of Snelling Avenue, south of Como Avenue, served as carnival chairman.

Opening the festivities on a Saturday in that first year was the St. Paul Daily News’ annual dog-sled races on Lake Como, which drew a turnout estimated by the newspaper at 18,000. (An eye-popping number, to be sure, but credible in an era when there were fewer entertainment options.) At one point, the pressing crowd interfered with the racers.

An early favorite in the competition was “Collie,” pulling Bernadine Downey, 12, of 1208 W. Hoyt Ave., dubbed “Queen of the Mushers” for her win the previous year. This time, however, Bernadine was destined to come in second.

King Midway was Curtiss Bevington, a salesman with the American Radiator Co., Prior and Minnehaha avenues.

As the week unfolded, there were skating events at Lake Como, Newell Park and Langford Park and a “Snowball Carnival Dance” at the Lake Park Clubhouse, Como and Snelling avenues. Attendees were encouraged to wear white.

The Hippodrome on the Minnesota State Fairgrounds hosted ice-skating and there was dancing in the Coliseum Ballroom, Lexington and University avenues, and roller-skating in the annex next door.

On Snelling Avenue Day, an evening parade traveled Snelling from Como to St. Clair Avenue through a decorated business district.

Band music and fireworks marked the opening of a toboggan slide at Hampden Avenue and Territorial Road.

Later in the week, another parade started at the western city limits and followed University Avenue to Lexington. Afterward, 3,500 costumed participants reveled in a Mardi Gras ball at the Coliseum.

Not surprisingly, the carnival was deemed a resounding success by its organizers.

“We have experienced a tremendous awakening of community spirit in our district which we attribute directly to the carnival,” said E. Swanson, chairman of the St. Anthony Park Improvement Association.

“It shortened the winter,” added a colleague.

In 1929, the Midway Winter Carnival was held in the first two weeks of February and started off with a gathering at the Chelsea Heights Elementary School skating rink, Hamline and Hoyt avenues, during the first above-zero weather the city had experienced in two weeks.

This carnival had a Native American theme, as suggested by the newspaper headline “Indians’ Whoopee Will Open Midway’s Carnival Tonight.” Perhaps it’s better left at that.

By 1930, the event was still being called the Midway Winter Carnival, but it had taken on a wider scope and many activities were held at Dunning Field on Marshall Avenue, with some as far away as Fort Snelling.

After that, plans to resurrect the citywide winter carnival were buried under the weight of the Great Depression.

Roger Bergerson chronicles the history of our area each month in the Park Bugle.