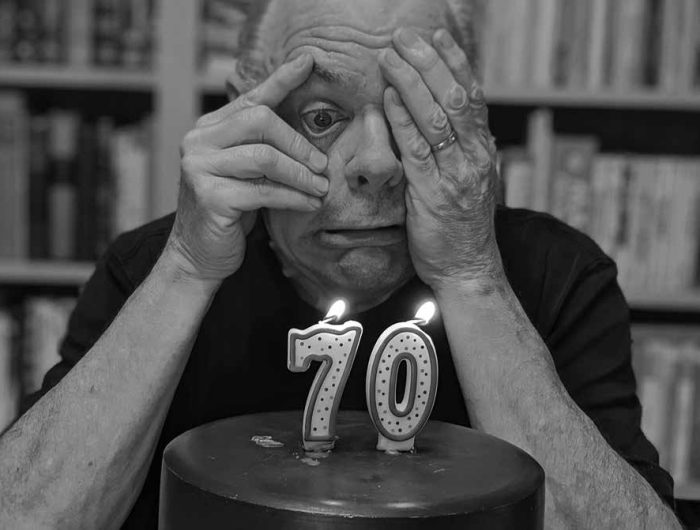 First, a message to readers my age (or older). Nothing herein is meant to poke fun at anyone but myself. If, collaterally, you find yourself poked as well, fire up that sense of humor, which helped get you this far.

I turned 70 last month. No other decade has fazed me. Not 60 nor 50, not 40 nor 30, and certainly not 20: The only people traumatized by the arrival of their 20th birthdays are child stars and boy-band members. But, 70 is proving to be a milestone around my neck.

I’m not exactly sure what the problem is. Maybe it’s that I’ve sidled so close to death’s pale form that I can smell its breath. Maybe it’s the fact that I am usually the oldest person in the room. Or maybe there is no problem. Maybe this is just what it’s like to feel one’s way through the haze of dotage.

Well, that didn’t happen to me. That’s not how it’s supposed to work, Mick Jagger notwithstanding, and there are significant commercial and cultural reasons for this.

My wife and I are no longer consumers. We have everything we want and need. We’ve furnished our house and bought our cars. I have more clothing than I could possibly wear out in my now-foreshortened lifetime. I grew up poor and wore my brother’s hand-me-downs so, on the rare occasions now when I need new clothing, I don’t buy pants with holes ripped in them or shirts that look like they’ve been washed 150 times. In sum, advertising and the commerce it promotes are dead to me (except for catheter and adult-diaper commercials, which have my full attention). And, regarding 21st-century technology, what I don’t understand of it—and that’s a lot—I appear to be able to live without.

The cultural landscape is more of the same: I listen to Live From Here, the radio show that replaced A Prairie Home Companion and, even though I am a professional musician and had a 40-year relationship with the Companion, the new show is chock-full of music I generally don’t quite get. It’s creative, ambitious, demanding stuff, played by people I know and like and respect. But, like advertising, it’s not aimed at me.

I don’t mean to be curmudgeonly or to sound whiny. This is not a problem. I’m fine with my ever-advancing fossilization, and it’s imperative that popular culture and the arts move forward. I want there to be artists coming on to the scene whose work is not aimed at me. I can like it if I want, but they don’t need me to like it. And, when I say that today’s pop music is insipid and all sounds the same, it’s what my parents said about ’60s pop music and it’s what the next generation will say about the drivel that is sure to be mid-21st-century pop music.

In place of knowledge of current popular culture, I have seven decades of life, and mine has been incredible. I was born just four years after the end of World War II. I saw “white” and “colored” bathrooms in my hometown stores. I was in grade school when John Glenn went into space, and I still have the footstool I was working on in junior high shop class when I heard President Kennedy had been shot. I was playing in a professional rock ‘n’ roll band before the Beatles invaded America. I have witnessed the entire history of computer science. I remember when collegiate sports were collegiate and not professional.

As I noted earlier, it’s important that we remember that cultural experience is not an either/or proposition. We pick and choose what floats our boats. I possess a unique set of memories, interests, perspectives and passions, some of them brand new—current—and some of them, well, ancient. You can’t have mine, and I can’t have yours.

I began with a message to seniors; let me close by waxing avuncular to you youngsters. Before the start of school each fall, I was issued, along with an unopened eight-pack of Crayolas, six unsharpened pencils and a Big Chief tablet, a brand-new pair of Levi’s. And I still remember that amazing, beautiful, intoxicating indigo. When you guys pay $250 for a pair of jeans that someone on the other side of the world “distressed” instead of honestly earning the wear and tear and patches and stains yourself, you are missing out on one of life’s great sartorial experiences: wearing your clothes out. And, kids, that indigo is really trippy.

Adam Granger, a St. Anthony Park resident, is a frequent contributor to the Park Bugle.