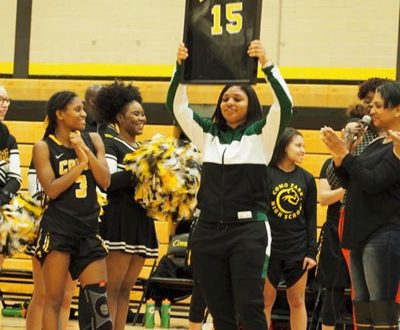 Andrayah Adams holds up her No. 15 jersey at a school ceremony to retire the jersey she wore through her storied varsity career at Como. Photo by John Millea

The Como girls’ basketball team defeated Harding Feb. 5 in the Como gym. This was not unusual. The Cougars have won 38 consecutive games in the St. Paul City Conference over the last four seasons.

However, something quite unusual happened at halftime of the game.

St. Paul Mayor Melvin Carter stepped out from the bleachers to honor Andrayah Adams, as the Como basketball family held a ceremony retiring No. 15—Adams’ jersey during her storied six-year varsity career.

Not only did Adams score more than 3,000 points, earn all-state honors and lead Como to consecutive city crowns and a berth in the 2016 state tournament, she also inspired a community and showed her younger teammates how to work.

“When they look at how you pushed yourself to heights and greatness, it’s an example of what we can do ourselves,” Carter said. “What’s even more important than the athleticism that you show is the leadership that you’ve shown in this community. You’ve inspired people to be their best selves.”

Adams is now a sophomore studying and playing at St. John’s University in New York. After playing in a win over Xavier, Adams’ was flown home. Her St. John’s coach John Tartamella caught a flight, too, in order to be at Como for the special event.

Minnesota State High School League media specialist John Millea chose to cover the ceremony for his statewide column. “Honoring a Hometown Hero at St. Paul Como Park” is a great read in the “John’s Journal” link at mshsl.org for Feb. 5.