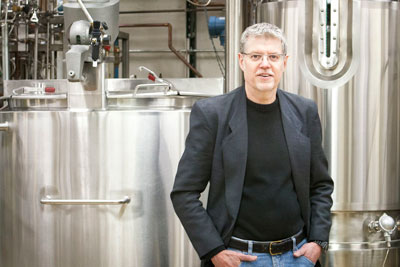 Fracking is in the news these days. The process involves extracting natural gas from shale rock formations deep below the earth’s surface by hydraulic fracturing—essentially blasting out the gas under high pressure with chemically treated water.

Largely because of fracking, natural gas production is rising. Supporters of fracking hail it as a step toward ensuring the nation’s energy independence. Its detractors say that fracking will lay waste to huge stretches of rural America, contaminate the groundwater supply and destroy the delicate balance of nature.

Como Park resident Larry Wackett sees things somewhat differently. For Wackett, Distinguished McKnight University Professor of Biochemistry at the University of Minnesota’s BioTechnology Institute, fracking is one alternative in the business of making sure we have enough fossil fuel to power our lives. Wackett’s work focuses on making the process less destructive by creating methods to cleanse and recycle the massive amounts of water used.

A clear-eyed view of the limitations and possibilities of energy resources is one of the most important things that he brings to the discussion of fracking, he says.

“People say, ‘Why don’t we give up fossil fuels?’ Well, I used to work on renewable energy, and it’s a myth that we could cover our energy needs with renewable [sources],” he says. Without fossil fuels, asserts Wackett, “we could only feed half the population of the world. Our choices are oil, coal or natural gas, and the main way we get gas is [by] fracking.”

Wackett thinks that it’s a misrepresentation to say that fracking “is the worst form of getting fuel.” The power of coal mining to despoil the landscape is frequently overlooked, he says.

“Most people have not seen coal mining where a whole mountain gets scrapped,” he says. As for oil, “If we don’t frack, there will likely be drilling in the Arctic.”

Wackett has not yet visited a fracking site. His lab works on analyzing samples of wastewater taken from Marcellus shale in Pennsylvania and the Bakken shale of North Dakota.

“To clean the water, we need to know what’s in the water,” Wackett says. “We’re developing methods that will be used in purification of the water used in fracking. We’re funded by the National Science Foundation, but we’re also talking to companies [involved in fracking]. They’re under the pressure of public opinion. If they can re-use water, they’ll save money and it will be good for the environment.”

Wackett is getting to know something about the pressure of public opinion himself. In his long career in academic biochemistry, the 59-year-old professor has never before worked on anything as contentious as fracking. Not one to shrink from controversy, Wackett has embraced the challenge of interacting with the public.

“It’s easy to work on esoteric things, but this is different. I think there’s a lot of misinformation,” he says. He is the first to admit that there are surprises in leaving the ivory tower.

At a recent public talk on his work, he was surprised to find the auditorium overflowing—and armed security guards flanking the stage. Fortunately, he remarks wryly, “nobody stormed the stage.”

The questions were polite but pointed. He thinks part of the controversy over fracking is “symptomatic of a polarized society. You can find whatever information you want to find on the Internet” to support your position.

Wackett sees his work as a corrective to the do-it-yourself online “science” that sometimes infuses ideological sites on all sides of a controversial issue.

“My role is to analyze these water samples,” he says. “My goal is not to make companies look good or to back environmentalists up, but to publish what we find.”

It’s a modern-day formulation of a scientific creed that he’s embraced in one way or another since he was a boy growing up in the New York City area.

“I’ve always been interested in science,” he says, “since I inherited my older brother’s chemistry set.”

Part of the excitement of chemistry was producing the colorful special effects of chemistry with explosive flashes and flammable salts. Wackett marvels that, as a 12-year-old in those long gone days, he was able to go to hobby shops in search of the incendiary ingredients for his innocent fireworks.

“Now they’d never sell those chemicals to the general public,” he says. At 16, he was constructing his own telescope at New York’s Hayden Planetarium.

“I was told I could make a better telescope for $200 in materials than you could buy for $3,000,” he says. It was the kind of do-it-yourself revelation that produces a bench scientist. After earning a doctorate from the University of Texas and pursuing a post-doctoral fellowship at MIT, Wackett arrived in Minnesota as an assistant professor in 1987.

He’s built his career at the U ever since. He met his future wife here, and his two children attended St. Paul public schools.

“This area is a really good fit for me,” he says. When he’s not working, Wackett’s often to be found at the Midway YMCA playing pickup basketball with guys less than half his age.

“Even though I can’t run, I have a skill,” he says. “I’m better than the rest of them at shooting.”

A researcher even in his recreational hours, he attributes his hoops prowess to instructional videos he got for his son when the boy was trying to improve his own game in high school. As a result, the son became a good athlete, but Wackett watched them, too, and “became a much better shooter.”

Wackett confesses that he can’t predict how long fracking will last as a source of natural gas.

“I’m not a geologist. This is not my area,” he explains before hazarding a guess. “It’s a random walk to try to estimate the size of a [fracking] field. Maybe 50 to 100 years. Maybe less.”

Meanwhile, Wackett often tells the critics he encounters, “[Fracking] is happening. You can just criticize it, or you can try to do something.”