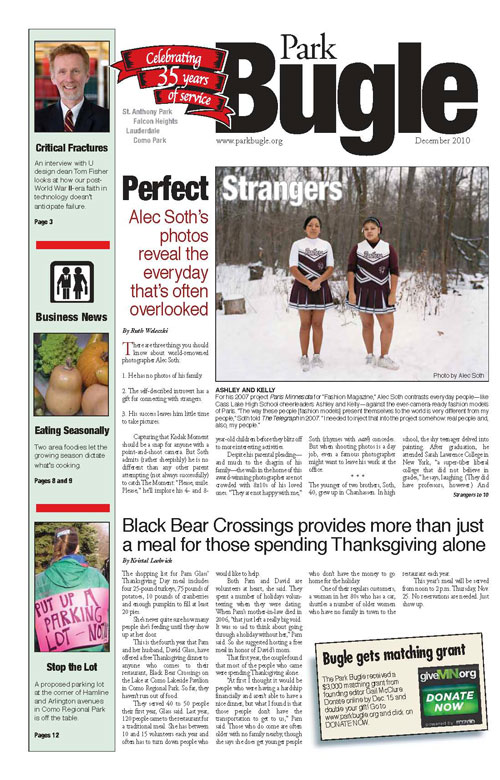 Editor’s note: This article was first published in the December 2010 issue of the Park Bugle. We wanted to run it again as Alec Soth will be unveiling a billboard that will celebrate the Creative Enterprise Zone at Vandalia and University on Tuesday, June 3, at 2 p.m.

There are three things you should know about world-renowned photographer Alec Soth:

1. He has no photos of his family.

2. The self-described introvert has a gift for connecting with strangers.

3. His success leaves him little time to take pictures.

Capturing that Kodak Moment should be a snap for anyone with a point-and-shoot camera. But Soth admits (rather sheepishly) he is no different than any other parent attempting (not always successfully) to catch The Moment: “Please, smile. Please,” he’ll implore his 4- and 8-year-old children before they blitz off to more interesting activities.

Despite his parental pleading—and much to the chagrin of his family—the walls in the home of this award-winning photographer are not crowded with 8x10s of his loved ones. “They are not happy with me,” Soth (rhymes with oath) concedes. But when shooting photos is a day job, even a famous photographer might want to leave his work at the office.

Breaking out of the studio

The younger of two brothers, Soth, 40, grew up in Chanhassen. In high school, the shy teenager delved into painting. After graduation, he attended Sarah Lawrence College in New York, “a super-über liberal college that did not believe in grades,” he says, laughing. (They did have professors, however.) And though he had the skills to take advanced painting as a freshman, he found no joy in it.

He tried outdoor sculpture but was more intrigued with photographing the surroundings than the art. His next challenge was to figure out “‘How can I leave these people out of the picture?’ I was terrified of people,” he says. Being people-phobic made photographing them difficult. So a determined Soth immersed himself in people-friendly settings and forced himself to take pictures.

In college Soth worked as an assistant to commercial photographers but grew disenchanted by the mechanical, deliberateness it required. Resigned to the fact that passion did not translate into a livelihood, Soth took various photo-related jobs, including one at the Minneapolis Institute of Arts, where he worked for seven years archiving in-house photos.

“It was a decent job, kinda related to photography, and I was done at 5,” Soth says.

Soth’s big break—which he prompted by printing and giving away 50 ink-jet books—came in 2004 with Sleeping by the Mississippi, a five-year photojournalism project documenting the lives that define and line the Mississippi River from Minnesota to Louisiana. Mississippi, won national acclaim with its powerfully haunting images of eccentrics and outcasts, and it opened the door to opportunities here and abroad.

Soth’s photos are deliberate, but true—a sort of posed-candid hybrid. He looks past the obvious to reveal stark, stunning everyday qualities that are often missed or overlooked. There is nothing “pretty” about his pictures; no instant gratification. His photos require contemplation, and that requires time. What he captures in that post-“Say ‘Cheeeeese!’” moment is unnerving in its honesty.

From Goth girl to fisherman to mother-daughter prostitutes, Soth’s subjects are composed and unapologetic, as though they’ve looked up from their private lives to say: “Can I help you?” before resuming conversation.

For Niagara, the Mississippi follow-up, Soth sought a love story. What emerged from the honeymoon capital was a darker tale that looks at betrayal, suicide, suspicion and pain. Harder than persuading newlyweds to disrobe for the camera, he says, was asking people to share with him their love letters, which express affection, as well as despair, anger, rejection.

Kym, Polish Palace by Alec Soth
“I don’t take happy photos,” Soth says. “I’m not looking for sadness, but I am attracted to certain kinds of people.” Like Kym in the Polish Palace. Sitting in the “V” of a desperate-red, faux-leather booth—a Leinenkugel-bottle light hanging above her on one side, paper hearts on the other—she wears a look of bored resignation, like she is waiting for someone but wouldn’t be surprised if they didn’t show.

But to draw out and then capture that candor requires more than serendipity and a quick click of the shutter. The secret is to help his subjects forget they are the focal point. So, when Soth hauls out the 8-by-10 view camera, the attention shifts. As he moves through the cumbersome set-up, snapping the tripod into place, positioning the camera and loading film cartridges—one at a time—his subjects begin to relax. And that’s when Soth’s gentleness and his quiet, self-deprecating humor come in and The Moment begins to unfold.

Too busy to work

Soth, his two-person staff and his Labradoodle, Misha, work out of a two-room studio in South St. Anthony Park. (“I live in Minneapolis,” he says. “Sorry to break it to you.”) But these days, the day-to-day business of his business is less about taking photos and more about administrative maneuvering, a skill he is still mastering, he says.

“There is this fantasy that I’m just driving around taking my pictures,” Soth says. “I barely take pictures anymore. It’s more about just dealing with problems.

“There is no romance, but there are moments of romance,” he says. “But it tends not to be here.”

Ironically, the business minutia that consumes Soth’s time—tracking photos, coordinating shows and schedules, negotiating commissions and contracts—is a product of his impressive body of work that stretches around the world. “So much of my work is from outside the country,” Soth says, because “ I’d have a hard time sustaining myself with work in Minnesota, or even just in the [U.S.] country.”

Soth spent two years planning the installation of his current show at the Walker Art Center in Minneapolis, From Here to There: Alec Soth’s America, which runs through Jan. 2. The exhibit features a decade’s worth of photos from myriad projects and includes his latest, Broken Manual. It’s not as easy as it looks—all the planning and designing, organizing and orchestrating that go into a show, Soth says, “but you want it to look that way.”

Ruth Weleczki is a freelance writer who lives in St. Anthony Park.