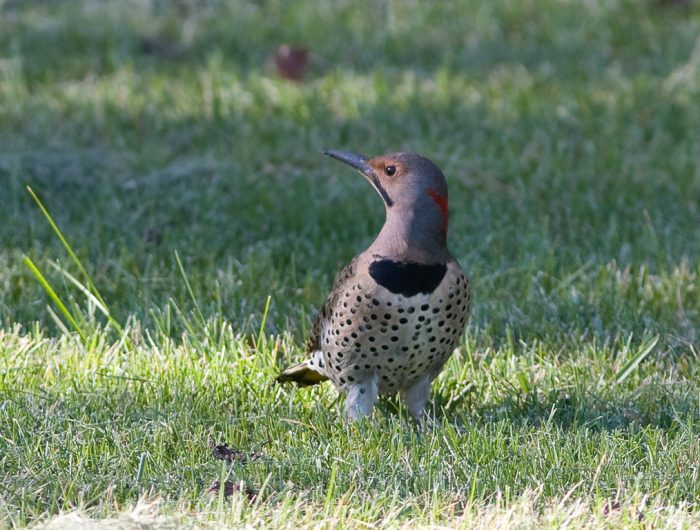 All about the northern flicker

I was walking my pup, Rocky, through the neighborhood the other day when he made a necessary stop. While he was busy, I looked around and saw a beautiful yellow feather on the ground.

The feather was about six or seven inches long and its shaft was brilliant yellow. I identified it as from a yellow-shafted flicker. I left it on the ground for someone else to discover, picked up after Rocky and headed across the street.

Just then, my friend, Quentin, came running out of his house toward us waving a feather in his hand. It was yellow, about three to four inches long.

I told him there was another feather just over by those birch trees. He went and searched and returned holding one feather in each hand. He was pretty excited.

Pete Dunne, a famous bird writer, notes that at some point in the calendar year, flickers are found virtually everywhere in North America.

The northern flicker has lots of black barring above and spotting below. In addition, it has a black bib across the chest that always reminds me of a collegiate letter sweater.

The subspecies gets its yellow-­shafted name from the color of the feather shafts, or remiges, in the wings and tail. That color comes from carotenoids like lutein in their food, perhaps modified by the metabolic process. Flickers in captivity need carrots and paprika to get their color.

Yellow-shafted flickers can have anomalous red shafts from eating berries of the non-native bush honey­suckle (Lonerica) which have a chemical that interferes with the production of lutein.

Both male and female yellow-­shafted flickers have a bright red nuchal patch on the nape, but only the male has a black mustache or malar (cheek) stripe. That is the only coloration that distinguishes the sexes. They both show a white rump patch in flight.

Flickers’ spring migration is from late March through May. Fall migration is from September to November. Some birds stay around all winter especially if there’s access to feeders. For example, the Christmas Bird Count in Saskatoon, Saskatchewan, Canada, has reported flickers since 1984, despite temperatures of 40 below! Those are some hardy birds!

Flickers feed extensively on the ground. On rangeland, they’ve been known to break apart dried cow dung to find colonies of ants and beetles. Their tongue can stick out over 1-1/2 inches beyond the bill tip. They have a large crop where they store food to bring back to their hatchlings.

Flickers nest in cavities. They’re known as keystone excavators and have an influence on secondary cavity nesters like chickadees, tree swallows, house wrens, nuthatches and brown creepers. These cavities are sometimes usurped by starlings, squirrels, screech owls and kestrels.

The female flicker lays a clutch of five to eight eggs, about 1.1 inches long. The eggs are white, like most woodpecker eggs, because they don’t need camouflage markings when they’re at the bottom of a dark cavity.

In “Life Histories of North American Woodpeckers,” A.C. Bent reports, “The pellucid color of the newly hatched flicker resembles that of freshly sun-burned human skin, but so translucent that immediately after a feeding one can see the line of ants that stretch down the bird’s throat and remains in view two or three minutes before passing onward.”

Flickers seem to have a generous tolerance of humans. They wait quite a while as someone approaches before flushing. Bent reports that a flicker, attacked by a hawk, usually waits until the last second, with the hawk in swoop, before it dodges quickly to the other side of the limb.

And not all birds migrate north or south. In 1962, 10 or more flickers took a boat to Europe, one disembarking in County Cork, Ireland. I like to think it was for the Guinness. But maybe they Googled ants in Ireland and learned there are more than 31,000 species in Ireland compared with only about 1,000 in North America. “Let’s eat!”