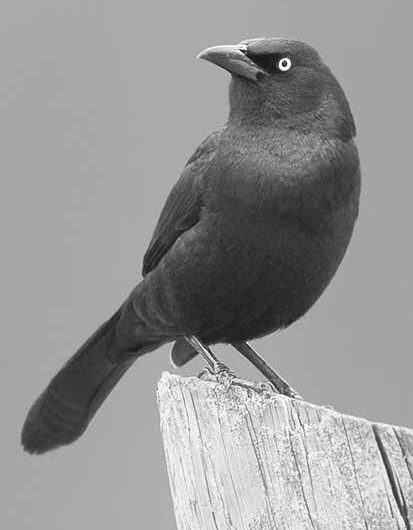 All about those danged grackles!

Here in Minnesota, we have a black bird called the common grackle. But it’s had other names too, some not fit to mention in a family newspaper.

It used to be called the crow blackbird because it’s bigger than most other blackbirds. It was also known as the purple grackle. That sounds like a superhero name to me.

The most favorite name I heard was that used by an old timer in West St. Paul. One winter morning a few years ago, some friends and I were doing a bird count. As we walked by the old timer with our binoculars hanging around our necks, he told us about the birds he’d been having at his feeders.

The short answer: There is no easy way as they can be very persistent birds. The common grackle is the size of a mourning dove, about a foot long from tip of beak to tip of tail. It has a long, formidable bill that comes straight off the face with no forehead. The tail is long, keel-shaped, straight and stiff.

The adult bird has a malevolent yellow eye. In fact, noted author Pete Dunne declares that the grackle’s “expression is nefarious.” It’s definitely a bird with an attitude. Dunne adds that it “stalks more than it walks” and moves with “a haughty demeanor,” dominating other birds.

Adult males have iridescent plumage about their heads and necks that can appear green, blue or purple, depending on the viewing angle. The wings and belly are brownish or bronzed, but in poor light, or at a distance, the entire bird just looks black.

Females are smaller and less iridescent. Young birds of both sexes are sooty brown with brown eyes and lack any iridescence.

I get a kick out of watching the adult males posturing with one another at my bird feeders. Males put their heads straight up, puff out their feathers, and hold their wings out at the side, attempting to appear bigger and tougher to dominate the competition. While they’re playing at being the “big bird,” the females and youngsters are getting all the seed!

Grackles need trees in which to nest, but they are birds of the open country. They spend their days in pastures, feedlots, cornfields, plowed fields, suburban lawns, city parks, marshy areas, open woodlands and swamps. But they avoid the interiors of extensive, dense, mature woodlands.

Grackles nest in small, loose colonies of 20 to 30 pairs in deciduous and coniferous trees up to 60 feet above ground. But they can also be found nesting in shrubs, roadside plantings, natural cavities, on ledges, even in cattail marshes, from one to three feet above the water. The nests are loose, bulky structures of weed stalks, grasses and debris, sometimes reinforced with mud on the inside. Then lined with grasses, feathers and fine debris.

They often roost and feed in tremendous aggregations with other blackbirds, which can total more than 100 birds. Grackles leave the roost at first light and return at sunset, flying in long linear flocks reaching miles in length that Dunne says are reminiscent of smoke on the horizon. They also do that turning and wheeling in unison in a maneuver that is common to starlings.

Winter roosts in southern states can reach up to several million birds that include starlings and other blackbirds.

The grackle demonstrates a fairly high level of intelligence. Arthur C. Bent, an ornithologist from the late 19th and early 20th centuries, tells of a letter he received describing a grackle working on a hard crust of bread in a city park in Washington, D.C.

The bird was having no luck pecking at the bread, so it picked it up in its bill, and flew a short distance to a birdbath set into the ground by a hydrant. There was already a pigeon soaking in the water and the grackle didn’t want to share its find with the larger bird. So, it walked into the bath, turned its back on the pigeon, dropped the crust into the water, waited a few seconds, took it out, hopped across the sidewalk, and gulped down its prize. The pigeon watched curiously.

Grackles have a varied diet, including insects, crustaceans, invertebrates, fish, small vertebrates, bird eggs, nestlings, fruit, grains, grass, seeds, nuts and acorns. A grackle’s bill is very strong. They don’t poke at acorns; they crush them, cracking them open at the back of their bills.

My friend George farms near Rochester. He says grackles go down a row of sprouting corn plants, pulling up the short stalks. My reading suggests the birds may be looking for corn borer larva wrapped around the roots. But in reducing the corn borer threat, the birds are damaging the corn crop. I know George considers them those danged Gackles!