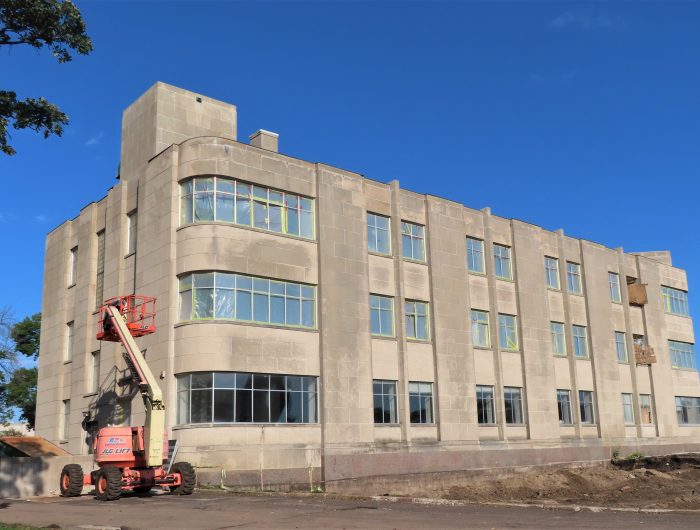 Construction has begun on the Amber Union housing project, formerly known as the TIES building, on the southeast corner of Snelling and Larpenteur avenues.

More than two years after the Falcon Heights City Council approved the project, crews are completing asbestos abatement and soil testing and will begin framing up interior spaces in the coming weeks.

The main building at 1667 W. Larpenteur Ave. will contain 125 apartments, all at “affordable” rates pegged to income levels at 50 percent of Twin Cities area median income. Space for a coffee shop or other similar business will be created on the ground floor.

City Administrator Sack Thong­vanh said he expects the renovations to be completed in the fall of 2022.

Delays in obtaining state financing had slowed the project. Thongvanh said in order to finance the renovations at affordable rents, the city created a tax-increment finance (TIF) district for the project, but only for 13 of the 26 years that a TIF district can exist.

“We need to be able to capture the tax base as soon as possible,” he said.

The building has been added to the National Register of Historic Places and will be renovated to comply with those standards. Developer Buhl Investors has not said what will be done with the second building on the site, a parking garage.

Buhl renamed the site Amber Union with a nod to its original purpose as national headquarters of the Farmers Union Grain Terminal Association.

In recent years, the building has been referred to by the name of the TIES education technology consortium that occupied it in the late 1990s and early 2000s. The city acquired the property after TIES moved and sold it to Buhl in 2019.

Anne Holzman is a freelance writer covering Falcon Heights and Lauderdale government news for the Bugle.