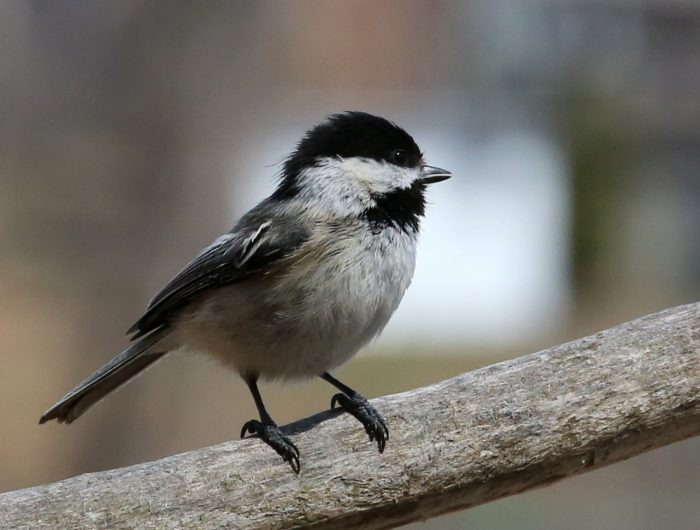 An adventure with a Chickadee nest 

As my pup, Rocky, and I were heading up the alley returning home from our midday walk, I noticed a pair of chickadees sitting atop a chain-link fence.

One of them flew over to the fence post and then disappeared down the post. The post wasn’t wood, it was actually a steel pipe about three inches in diameter.

Soon, it reappeared at the top of the pipe and flew off. Its partner then flew to the pipe and dropped down inside.

After the second chickadee had finished its mission, it also flew off.

I approached the pipe to see what was going on. The inside diameter was about two inches, so the wall of the pipe was about half an inch thick.

There were several bolts through the pipe at cross directions, the first about five and a half inches down, the second at a right angle to the first about 11 inches down. These had been used to attach the chain-link fence at one time but were no longer in use. The nest itself looked like it rested on another bolt a foot and a half down the pipe.

Chickadees are cavity nesters, but I’d never seen them in a cavity like this before. In dropping down the pipe, the chickadees had to dodge two large bolts. This cavity nest in a pipe had some pluses and minuses.

On the plus side, it was ready made, no excavation needed. It was certainly sturdy, wouldn’t fall in a high wind, wouldn’t rot. It seemed secure from predators. A raccoon couldn’t reach down that far to grab an egg or a nestling. A cowbird couldn’t fit down the pipe, get past the bolts, to lay her parasitic egg in the chickadee’s nest.

On the down side, the pipe was open to the rain. And the noonday sun would beat right down the pipe for a while each day.

I flashed my pocket flashlight down the pipe. There was some fluffy material, but no sign of an egg or a nestling. Some mother birds cover their new hatchlings with nest material whenever they leave the nest. I think that was what I was seeing.

That first encounter was on June 1. Thereafter, I peeked down that pipe nearly every day. The neighbors must have wondered about me even more.

I began to see black and white plumage about the second day I inspected, but it was hard to get a good look at the youngsters with those bolts in the way. I felt sure that I saw three nestlings, maybe four.

Sometimes I thought I saw an adult chickadee nestled in there with a couple of nestlings, but my birding buddy Val assured me that there wouldn’t be any adults in the nest once the kids had hatched and gotten their feathers.

This nearly daily nest gazing lasted for two weeks. We had some rain, some very hot weather, and I wondered about how things were going in the steel tube. I usually could make out two or three little chickadees down there.

Then, on June 15, I peeked in, saw only one nestling, stock still, and then I recoiled at a very strong smell of death and decay. It looked like the surviving chicks had made it out, but one didn’t. I’m guessing there were two that successfully fledged.

The beak of a chickadee is not made for excavating a live tree. They often work on rotted, punky wood, like a dead stump or branch. They pull out a beak-full of soft wood and usually spit it out away from the tree they’re working on. They don’t want to leave any clues around for potential predators.

I once watched a pair of chickadees working on my neighbor’s dying mountain ash tree. That tree had two holes at the top of the large snag that remained, one hole above the other. It looked like the chickadees could rent out the lower level to another couple.

The chickadees took turns excavating the nest hole. First one would disappear into the hole, work a bit, then come out with a beak full of sawdust. Well, not really sawdust, more like beak dust. After it flew off, the second bird, which had been perched nearby watching, would take a turn at the project.

The pair didn’t nest in the cavity they’d been working on. Something must have changed. Perhaps one of the couple met a sudden demise. The tree itself eventually fell in a storm. There wasn’t much life left in it.

The fence post/pipe nest was in one of a pair of pipes on opposite sides of the property. I wondered what was in the other pipe and went to look down it with my flashlight. There was a wasp, sitting on a wasp nest under construction. Never mind!