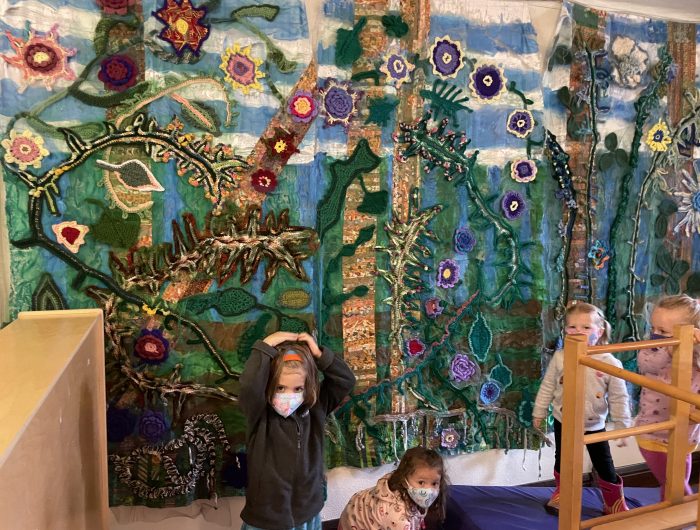 Inspired by a large piece of textile art hanging in their classroom at St. Anthony Park Community Nursery School, four students one day this fall imagined they were tigers and began prowling around in a tiny, growling pack.

The art titled “The Jungle” was made by Catherine Reed, an entomologist and artist who lived in the St. Anthony Park with her family from 1989 to 2004. Reed died in May 2021 from ALS.

But this part of Reed’s artistic legacy lives on, benefiting students at the Community Nursery School, which is at Centennial United Methodist Church.

First, a little bit about Reed: She was raised in St. Anthony Park by her parents, who were both scientists, and her grandmother. She attended Cornell College in New York where she met her husband of 48 years, Norm Westhoff. She earned a master’s degree in resource ecology at the University of Michigan and a Ph.D. at the University of Northern Colorado.

In 1989, by then mother of three young children (Ben, Julia and Alex), Reed launched a newsletter called “KidScience: A Science Activity Newsletter for Early and Middle Childhood Teachers” that she produced for subscribers for five years.

After moving to Lawrence, Kan., in 2014, Reed focused extensively on her art. Her many pieces are now displayed across the country.

Ben Westhoff, Reed’s son who is an investigative reporter and author of many books, said her art can be found today “in Kansas, Minnesota, Missouri and California, at the very least.”

Molly Breen, director of SAP Community Nursery School, was a high school classmate of Westhoff. “I inquired about the pieces after Ben posted that they would be downsizing the family collection,” Breen remembered. “The family gave it to the preschool as a gift.”

In a YouTube video titled “Momumentary” produced by Westhoff, Reed reflected, “You could say that science and my art were both focused on nature.”

Westhoff described the piece in an email as “my mom’s magnum opus, the biggest (and in my opinion, best) piece she ever did.”

Westhoff added, “When it went up at a Lawrence, Kans., gallery in June 2016, it was a walk-in installation, with vines and trees made out of yarn forming an overhead canopy, and a jungle floor as well.”

“The original installation was way too massive for the preschool to display in its entirety,” Breen said. “Ben and family decided which pieces to pass on to the school based upon the space I thought I would have to display them.”

Today, “The Jungle” hangs on the walls in two SAP Community Nursery School classrooms. Children are invited to touch the yarn vines and feel the knitted flowers and ferns.

“It makes me feel good,” one student said.

Another student raced up to Reed’s art pointing proudly, “I like that flower SO much! Oh! But that’s the one I like even MORE than the other one, because it has blue. And I would climb to the top of that tree to search for tigers. Then, I would crawl like a tiger so that it would think that I was a tiger too. And I could roar with it then.”

And then Breen explained to some slightly confused preschoolers, “Even though grownups don’t grow taller, grownups keep growing too.”

Reed is likely to have concurred.

“One of my goals in showing my work,” Reed explained in Westhoff’s “Momumentary,” “is to encourage people to use more imagination.”

Breen noted, “I feel thrilled to have a piece of Catherine’s story here at the preschool. It seems to me that we are joyfully extending the narrative of a lifetime of curiosity, risk-taking, creativity and love for community. And what better place for those qualities of character than a preschool?”