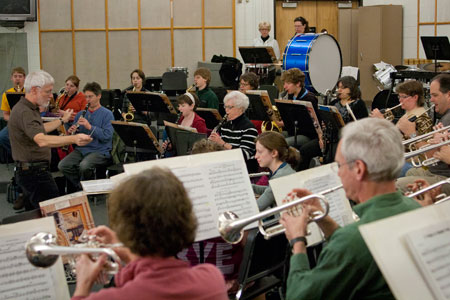 How many community organizations have you belonged to for 30 years? Although people tend to stay involved for long periods of time in the Bugle communities, a 30-year commitment is somewhat out of the ordinary. For Paul Husby and several others, the St. Anthony Park Community Band has been a part of their lives for three decades—since the band officially began in 1982.

The band began as a loose group of neighbors who liked to play music together. Longtime St. Anthony Park residents may remember Igor Razskazoff, Jack Strane, Gerald McKay and several others tootling away on the back of a flatbed truck in the Fourth of July parade. As the group grew, so did its need for a conductor. The group contacted the Roseville Community Band to see if anyone was interested in leading the organization. Paul Husby answered the call and has led the musicians for the last 30 years.

Husby has deep roots in the St. Anthony Park community. His grandfather was born in St. Anthony Park and he lives in the house his parents built in Roseville, just a short bike ride away. Husby majored in information systems at the Massachusetts Institute of Technology (MIT), where he was active in music. He now works in commercial real estate, which gives him the flexibility to work with the band.
The band is sponsored by St. Paul Public Schools Community Education and is funded by Park Midway Bank, the St. Anthony Park Community Foundation (with some funds earmarked for the band by the late Gerald McKay) and by honorariums from some of the institutions where the band performs. There is no cost to belong to the band and anyone can join.

And anyone has joined. More than half of the players have family members in the band, according to Husby, including siblings (both children and adults), spouses, parents and children. In the course of his tenure, Husby has conducted his wife and three sons. People come from all walks of life, with all skill levels, and they come from long distances. There have been band members from St. Anthony Park, Roseville and Falcon Heights, but also from South St. Paul, Mounds View, Minnetonka, Blaine and New Richmond, Wis.

One trombonist arriving late to the first practice last month noticed an abundance of trombones and offered to go home to get his tuba. Several new family combinations were joining or rejoining the group—a pair of sisters, a father and daughter, and relatives of current players. There are three families who have been involved with the band for many years, the Holmans, the Larsons and the Stohls. (Mim Stohl has played clarinet in the band for 28 years.) Husby’s sons, Joseph and Erik, enthusiastically played in the saxophone section at the first rehearsal and helped the newcomers find their places and music. Everyone seemed happy to be there (percussionist and vocalist Lily Dargis joined to “get away from the kids, though I asked them to join, too,” she said) and heartily dug into the new and old music.

There are nearly 50 active members in the band, usually with 35 to 40 at any one performance, though they can get by with as few as 30 to cover all the parts. This year, the band will play at the annual 4-H Ice Cream Social on Luther Seminary lawn on Friday, June 1, at 7:15 p.m.; at the Como Lakeside Pavilion Tuesday, June 19, at 7 p.m.; at the Fourth of July parade in St. Anthony Park; at Alden Park (one block south of Como Avenue and one block east of Raymond Avenue) on Wednesday, July 31, at 7 p.m.; and at the Minnesota State Fair parade on Friday, Aug. 24, at 1:30 p.m. In addition, the band often plays at retirement homes in the area, including the St. Anthony Park Home, Presbyterian Homes, 1666 Coffman, Eagle Crest Nursing Home and RosePointe Senior Living. The complete summer schedule is still to be determined.

Husby chooses music at a “good high school level,” though some pieces are a bit more difficult. He buys all the music (as opposed to renting it as many orchestras do) and has accumulated the parts for about 100 pieces. To keep things interesting, he tries not to repeat a work for at least five years after performing it. The repertoire ranges from classics by composers such as Holst, Milhaud and Ives to Broadway show tunes to jazz and some marches, though a band that practices only once a week doesn’t have the stamina to do too many marches in one performance.

The band’s season runs from April to the end of summer, though the band has performed as late as October (for a really cold dedication of the Raymond Avenue bridge a number of years ago). The first two months are spent in rehearsal and come summer the band meets only for concerts. Band members learn about 15 pieces for a season and perform about seven at any one concert.

Practices are held at the Como Park Senior High School band room the second Tuesday of the month from 7:15 to 9 p.m. If you’re ready to dust off that old instrument, there’s still time to join the band. You can find more information at www.stanthonyparkband.org, in the St. Paul Public Schools Community Education flier or by contacting Husby at 651-642-1559 or husby002@gmail.com.

Everyone is welcome and, as is the case in any band, clarinet and percussion players are especially in demand.

Michelle Christianson is a piano teacher, musician, writer and frequent contributor to the Park Bugle.