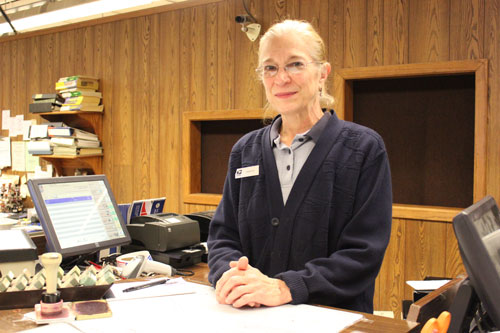 Annette: the familiar face behind the P.O. counter

Annette Edeburn has been working at the post office on Como Avenue for nearly 30 years.

Annette Edeburn has been the familiar face behind the counter at the Como Avenue post office for nearly 30 years. Now that the branch has closed at 2286 Como Ave., you can find her at the Roseville branch, 2000 County Road B2.

Edeburn says her move to Roseville is temporary. The official word from the U.S. Postal Service (USPS) is that they are searching for a new building in St. Anthony Park to house the branch office and she’ll be back in the neighborhood when that happens.

The Como Avenue branch closed on Nov. 13 after the lease it had held since 1970 expired. In February, Frattallone’s Ace Hardware made a bid for the property. In June, co-owner Tom Frattallone said the company had planned to open a store in late February 2016. Recent repeated attempts to get an update from Frattallone’s have been unsuccessful.

We asked Edeburn a few questions about her time working on Como Avenue:

What are the more peculiar items you’ve shipped in your time with the USPS? Mufflers and exhaust pipes. They are long and hard to fit into boxes. And bikes, mailing bikes to Africa.

Busiest day of the year at the post office? The day after Thanksgiving.

Favorite things? It’s funny to see the dogs press their noses against the glass door [because they know] we keep a jar of dog treats behind the counter. At one time, the hardware store next door [in the current Mischief site] and Ned’s Park Service across the street all had dog treats. It was dog heaven.

We keep a basket of Dum Dums [candy suckers] for the kids. All post offices should have candy. It brings the kids in and makes people interested in the post office.