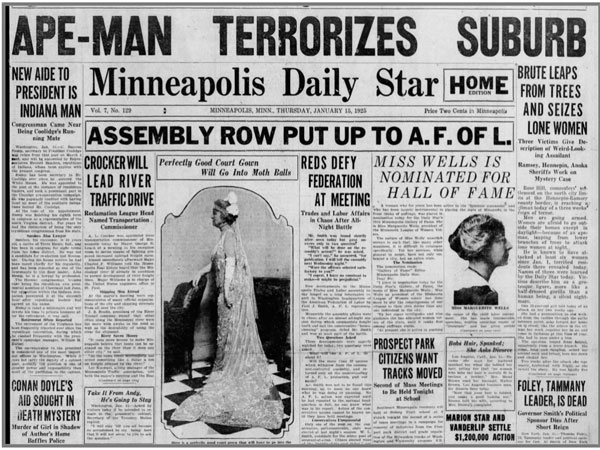 “Reign of terror” may have been journalistic hyperbole, but there’s no doubt that the citizens of Rose Hill, now Lauderdale, were on edge in early 1925.

An “ape-man” was said to be loose in the village, preying on women walking alone after dark. The Minneapolis Daily Starcalled him a “grotesque figure . . . more like a half-dressed gorilla than a human being . . . growling like an animal . . . hairy, hideous.”

Men, it was reported, had armed themselves, and women were afraid to go outside their homes except in daylight.

The epithet apparently was a reporter’s creation. Image courtesy of Minnesota Historical Society

Never mind that it wasn’t clear exactly how many victims there had been or how severe the attacks were. The newspapers knew a good story when they saw it and were off and running.

In the only assault described in any detail, a 19-year-old woman got off a streetcar on Como Avenue one night and was heading north toward Larpenteur Avenue and home. As she crossed a lonely stretch, she said a man, about 5 feet in height and broad of build, dropped from a tree limb and began choking her. His ragged clothes seemed too small for him, she said, his overcoat ripped in the back and shirt open in the front as if he had burst the seams and buttons.

What caused him to desist and presumably flee was not reported, nor was the extent of her injuries or whether she required medical treatment.

One newspaper said there had been six such attacks since the first of the year. Frank Gibbs, Rose Hill justice of the peace, said he knew of three.

The ape-man — or perhaps a second ape-man — was blamed for accosting a woman in north Minneapolis before being scared off by a passerby. A reporter noted that his description tallied with that of the Rose Hill ape-man, except that this one was well-dressed, spoke coherently and wore glasses.

Several suspects were brought in to St. Paul police headquarters, questioned and released.

Armed vigilantes and plainclothes detectives staked out the village, which had only a few streetlights at intersections and plenty of woodland to hide in, as well as the grounds of the Rose Hill nursery on the south side of Larpenteur at Eustis Street.

Residents felt they needed more police protection. One shopkeeper claimed that Ramsey County Deputy Sheriff M.V. Frederickson, who lived in the community, had too much territory to cover, from the west city limits to Rice Street and from Larpenteur north beyond Lake Johanna.

By the third week of January, the attacks had stopped and it was thought that the ape-man had been driven from the district.

By the end of the month, some wanted to believe he was in the St. Paul jail. A 24-year-old St. Paul man allegedly had confessed to attacking and critically injuring a young woman on the city’s East Side while drunk. His “age and build” corresponded to the description of the Rose Hill ape-man and Police Chief Ed Murnane plainly was hoping to tie him to those attacks.

Apparently, he was unsuccessful, because that’s the last that was heard of the ape-man of Rose Hill.