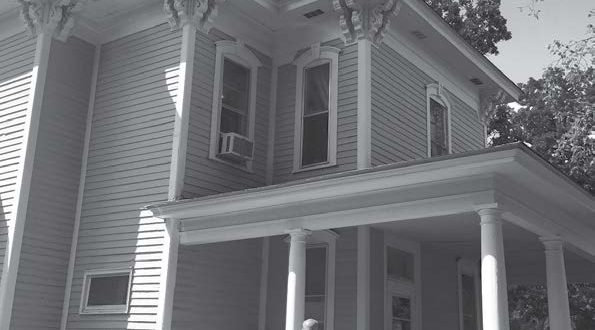 Roger Bergerson would have loved this.

The late Bugle writer chose the Hoyt-Hazzard House, the imposing Italianate mansion on Nebraska Avenue in Como Park, as the subject of his last local history feature for this newspaper.

Bergerson recounted the long history of the nearly 150-year-old house, which towers over its smaller, much more recent neighbors, built decades later on land that originally belonged to the Hoyt-Hazzard farm. And he explained how a local couple, Sarah Dye and John Coulter, had recently moved in and set themselves the formidable task of restoring the house to its 19th-century glory.

That was a year ago. Since then, Bergerson’s article has set in motion a deeper understanding of the area and times in which it was built.

Bergerson died without knowing his article had caught the attention of Reed Aronow, the real estate agent who had first introduced Dye and Coulter to their dream house.

“Before I went into real estate years ago, I studied archaeology . . . and when I mentioned this to the buyers, they expressed interest in the idea of someday having an archaeological dig at the house,” Aronow explained.

In fact, Dye noted the idea “was incredibly exciting . . . I majored in anthropology and I’m interested in the whole archaeological process.”

When Aronow saw Bergerson’s article in the October 2018 issue of the Bugle, he was reminded of the earlier conversation. “On a whim, I called my old archaeology professor at Hamline,” he said.

That would be Brian Hoffman, associate professor of anthropology at Hamline University and fellow Como Park resident.

“Micro-history of the kind that Roger wrote . . . is tied to a bigger understanding of economic, sociological and technology events,” Hoffman said. “Archaeology does that, too, in the story that objects tell. All of those things give us tangible connection to the things of the past.”

Long interested in the archaeology of his neighborhood, Hoffman saw a chance to tie potential findings at this site to another exploration he is conducting of a farmhouse of the same vintage in the Hamline vicinity. He also understood that there could be a measure of urgency in the Hoyt-Hazzard project, since the Dye and Coulter were planning to build a new three-car garage somewhere on the site. New construction could destroy potential archeological findings, so Hoffman needed to act fast.

Hoffman and his student crew began what he calls “soil coring” earlier this summer. “We pulled out core soil samples with a tube-like instrument” at regular intervals throughout the yard. We’re mapping locations every meter across the yard,” he explained.

So far, Hoffman and his students have discovered “lots of coal and ash and clinkers”—refuse of the heating systems of the 19th century. His further analysis will uncover evidence that “a distinct area of the yard was used for a specific activity like butchering animals or chickens. I’d like to find the foundations of some outbuildings.” Even discovering an old latrine can be an archaeological bonanza, because of the antique bottles and other objects that might have been thrown away in it a century ago.

After he completes the coring sample analysis, Hoffman may return to concentrate on particularly promising spots. “If we find anything of interest, we might open a large-scale dig there,” he said. “I’d like to understand the development of the Como neighborhood from farms to the urban places we live in today. I hope to discover something we don’t already know.”

And if he does make an archaeological breakthrough, it will be Roger Bergerson who showed the way. The dig has been dedicated to Bergerson’s memory.