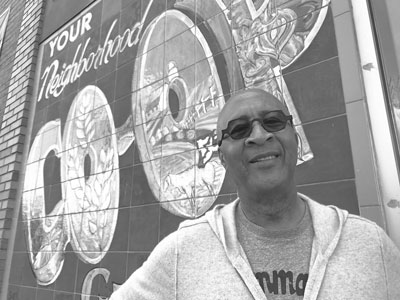 At Hampden Park Co-op, the new manager comes around to his roots

This is one of a series of occasional columns from Transition Town–All St. Anthony Park, the neighborhood-based group working for a local response to climate change: a smaller carbon footprint and a stronger community. You can find out more about Transition Town at www.TransitionASAP.org.

Chuck Parsons, the new general manager of Hampden Park Food Co-op as of mid-April, is a Johnny Appleseed from the first step. “I’m a dreamer,” he says.

In his office beyond a warren of workrooms he hands me his business card embedded with wildflower seeds and suggests I plant it. I’m immediately aware of his enthusiasm and his gratitude for the welcome he’s received, with co-op members seeking him out to introduce themselves.

When asked what he’d like to change he doesn’t hesitate: “I won’t feel successful as a general manager if I don’t find a way to make our employees whole by providing health care benefits.”

He cites how fortunate he is to inherit a sound business from the former general manager, Christina Nicholson. “Huge shifts and changes,” he says. “She did a lot of heavy lifting.” New produce coolers and a soup/sandwich bar “bring in a good lunch crowd. Lots of people come down.” He wants to expand the ready-made food further. How about weekend brunch food? Why not “work with farmer suppliers to bring in fresh produce and chickens, for example, for an evening meal program that would create new streams of revenue,” he says. He’d like to do this in-house and expand profitability, employment opportunities and quality control in one go.

“All the proteins we currently buy for the deli, I want to prepare inhouse: our own corned beef, our own pastrami, roast our own turkeys and beef,” he says. “We’ll have a better product and a certain cachet, a lift.”

But it will take time, he says. “I get that not everything needs to be changed overnight.”

The co-op is negotiating for new freezers, and when that happens Parsons wants “to reset the store.” The floor plan it inherited when it doubled in size at its 928 Raymond Ave. site has meant a less-thanefficient layout. He wants to open it up for cost savings and to give it a new look.

Parsons embodies the co-op mission of healing the world while supplying the neighborhood with good food.

“Hampden is more than a grocery store,” he says. “It’s spiritual, deeper than just buying groceries.” It’s the piece he had been missing, he says, as he traces his journey as a Shreveport, La., and New Orleans restaurant chef “trained in Cajun and Creole cuisine, who wanted to expand my repertoire.”

He comes from a military family that moved around, so he adapted easily to food tastes from Seattle to Durham, N.C., cooking for restaurants and eventually “for the two largest food contractors on the planet,” supplying aerospace companies and universities. Hampden Park Co-op is the smallest operation he’s ever managed, and he’ll need to “temper my enthusiasm” as he learns yet another culture.

“Here I’m getting a new start,” a new feel, having stepped away from corporate and rediscovered co-ops, he says. “Their values mirror who I am. I know farm-to-fork, neighborto- neighbor sharing by experience; I’m back around.”

He’s always shopped co-ops as “the only place I could get certain items” but never considered them for a career.

Do you share co-op values? Beyond being a loyal co-op shopper, how can we put our dollars to work for these values? Transition Town — ASAP is starting an investment club for neighbors who want to invest in cooperatives and other regenerative enterprises, mostly local ones. To learn more and be notified of the first meeting, email Mindy Keskinen at mindykeskinen@comcast.net. The club is a spinoff from the Transition Your Money action group, which is seeking ways to fund local sustainability.

Mindy Keskinen
Mindy Keskinen brings her editorial background to a project she shares with Pat Thompson: coordinating the Park Bugle's column from the local group Transition Town – All St. Anthony Park. The column features a variety of local voices on climate and resiliency topics. Working toward a "smaller footprint, stronger community" since 2013, TT-ASAP finds neighborhood-based ways to take action on climate change: learn more at TransitionASAP.org and drop in on a monthly meeting. Open to all, the group is part of a larger movement of municipalities transitioning from fossil-fuel-based ways of life to more eco-friendly, equitable practices. To browse their past columns by topic, visit TransitionASAP.org/park-bugle-columns. They welcome your ideas: reach Mindy at communications@transitionasap.org or Pat at transportation@transitionasap.org.