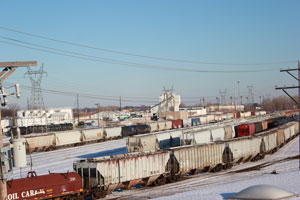 Bakken oil and us

Volatile crude oil shipments, which have been implicated in a number of rail disasters in recent years, may be traveling on the train tracks that run along Energy Park Drive, slicing through St. Anthony Park and bordering Como Park.

BNSF Railroad, which is the major Class I rail line dominating Minnesota rail transport, declines to make public the exact freight routes and schedules of its oil transports. “Since 9/11, we have worked with federal officials on improving public security,” said BNSF spokesperson Amy McBeth, “and as a result, do not make public information such as what hazardous materials move on what routes on our network.”

Some local observers are more outspoken.

“There are about four or five oil trains heading east every day,” according to former St. Anthony Park resident Jack Sheldon, who has been a rail enthusiast for many years and is the co-manager of the Jackson Street Roundhouse, a railroad museum located at 193 E. Pennsylvania Ave. in St. Paul, directly south of the BNSF railroad tracks.

The Roundhouse, he said, offers a great vantage point to observe rail traffic, including the distinctive alltank- car “unit trains” of 100 cars or more that transport oil and ethanol.

A tank car unit train, pulled by a BNSF locomotive, was spotted traveling east near the Raymond Avenue overpass on a recent Saturday afternoon. A man on the tracks, who declined to give his name but did admit to being a “railroad worker,” acknowledged that the train was “probably” carrying North Dakota crude oil.

Crude oil from North Dakota has been at the heart of several rail accidents recently. Last July, 47 people died at Lac-Mégantic, Quebec, when a train laden with Bakken oil exploded. In November, a North Dakota oil train derailed and exploded in Alabama, and on Dec. 30, the entire town of Casselton, N.D., was evacuated when a milelong BNSF oil train collided with another BNSF freight train and exploded, releasing a fireball of potentially toxic vapors.

Light sweet crude, the lowsulfur oil found in the Bakken formation of North Dakota and eastern Montana, has been the foundation of one of the great economic success stories of the last few years. Thanks to the hydraulic fracturing (“fracking”) oil-extraction process, North Dakota is now the second largest oil-producing state in the U.S., with a daily output of nearly 900,000 barrels per day in 2013, up from 81,000 barrels a decade ago.

The U.S. Department of Transportation, in a safety alert issued in January, warned that oil produced from the region might be more flammable than heavier, more sulfur-laden products produced elsewhere by older drilling methods. In the alert, the DOT’s Pipeline and Hazardous Materials Safety Administration urged emergency responders to remember that “light, sweet crude, such as that coming from the Bakken region … [typically has a flashpoint] below 73 degrees F.”

Oil, no matter how it is extracted, must be transported to to a report by the Association of American Railroads [AAR], that’s where the Class I railroads of America like BNSF come in. Noting that skyrocketing rates of oil production have outstripped the capacity of both local refineries and existing oil pipelines, AAR claims that in mid-2013, 60 percent of North Dakota’s crude oil production, or some 640,000 barrels a day, was leaving the state by rail for refineries on both coasts and elsewhere.

Not all of that oil is going through next-door-neighbor Minnesota, of course, but some of it likely is. About eight unit trains a day use the BNSF rail network to carry oil to refineries outside North Dakota, according to McBeth. St. Paul is part of the state’s most prominent rail hub, and the rail yard just south of Energy Park Drive is a major intermodal facility on the route between North Dakota and Chicago.

BNSF boasts that it has the highest freight capacity of any rail line serving the Williston Basin, the region that contains the Bakken oil fields. As early as 2012 the company reported that it was able to haul a million barrels a day out of the area.

Unit tank trains of the type that carry North Dakota oil may also carry ethanol, McBeth said. “The general public likely would not know whether a train was crude oil or ethanol.”

Most ethanol is produced in the Midwest and then transported out of the region to coastal markets and beyond. However, U.S. Energy Information Administration statistics suggest that ethanol production rates have remained relatively constant since 2010, unlike North Dakota crude output rates, which continue to climb, fueling among other things a boom in railway tank-car manufacturing.

“Crude oil-related cars accounted for 70 percent of all new tank manufacturing in 2012,” according to the business publication Crain’s Chicago Business. Freight-train enthusiasts spotting trains on a recent Saturday noted that the unit tank train heading east on a that day was composed of tank cars built in 2012 by American Railcars Industry in Marmaduke, Ark.

Ethanol isn’t considered an entirely safe load either. In an incident that offered an eerie premonition of events in Casselton, a tank train carrying ethanol derailed and caught fire in 2011, forcing the evacuation of the small town of Tisilkwa, Ill.

Although accidents have been well publicized, McBeth points out that rail transport remains overwhelmingly safe. “Railroads remain the safest ground transportation for freight in general and one of the safest ways to move Bakken oil from 1 crude oil,” said McBeth. “BNSF provides free railroad [hazardous materials] response training in communities across our network. Just this fall, we held a training session in St. Paul.”

The AAR also underscores the safety of rail transport of oil, noting that in 2012, “the pipeline crude oil spill percentage was 10 times that of the railroads.”

From a strictly local perspective, this may be modest comfort. No oil pipeline comes anywhere near this area of the Twin Cities, but when the wind is right nearly every house in St. Anthony Park can hear the rattle of a passing train.