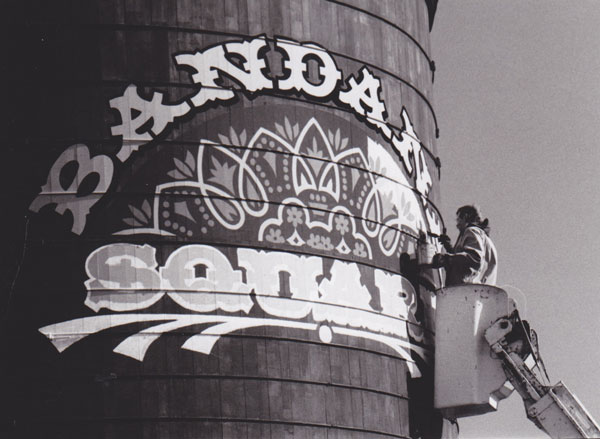 This advertisement from Bandana Square merchants appeared in the April 1989 issue of the Park Bugle.

You know there’s trouble when the owner of a shopping center says it was a mistake to build it and tenants take out an ad assuring the public that they’re still in business.That’s what happened in 1989, when the Amherst H. Wilder Foundation said enough was enough at Bandana Square in the Midway district’s Energy Park.

By then, just six years in to the deal, Wilder had lost $9 million on the retail mall. Foundation President Leonard Wilkening said the drain on the nonprofit’s resources was threatening its ability to fund the health and social-service programs that were its core mission.

Multiple restaurants and shops—Mama Lu’s Barbeque, Mullarkey’s, the Briar Patch and Teasley’s—had come and gone, but several dozen others hung on, among them Europa Unlimited.

The Bandana Square logo is painted on a nearby tower in 1983. The photo, by Terry Johnson-McCaffrey, was published in the October 1983 Bugle.

“The recruiters said it was going to be the Galleria of St. Paul,” is the rueful recollection of former Europa owner Michael Jaruch, his reference being to the upscale Edina shopping destination. “In retrospect, it was not a very visible location,” he said.

Commercial real estate firm Wellington Management now owns the complex, but in the early 1980s, Steve Wellington was deputy director of the City of St. Paul’s Planning and Economic Development Department. As such, he was familiar with the discussions and negotiations involving Energy Park.

It was an era of big projects intended to revitalize the city, and Energy Park was an ambitious effort to develop a 210-acre parcel between Lexington and Snelling avenues on the east and west and the Burlington Northern Santa Fe railroad tracks on the north and south.

Along with Wilder, a key player from the beginning was the St. Paul Port Authority, a government agency originally established to manage the St. Paul harbor. In 1955, the state Legislature authorized the agency to engage in economic development elsewhere in the city, which it proceeded to do by issuing tax-exempt bonds to finance projects.

Energy Park was initially envisioned as a business/industrial center, but evolved to include retail and housing, Wellington said.

“Both the Port Authority and Wilder had reservations about retail, but the mayor’s office and City Council pushed hard for mixed use,” Wellington said. He noted that it was a time when the specialty retail concept was in vogue across the country, Minneapolis’s St. Anthony Main being a local example.

Bandana Square occupied a complex of buildings constructed in 1890 as the Northern Pacific Railway’s Como Shops. There, passenger trains were repaired and maintained for much of the 20th century.

Wilder spent $17 million converting the site to a shopping destination, retaining the brick walls and exposed wooden beams that harked back to its beginnings.

The new mall got off to a shaky start in late 1983, behind schedule and only partly finished. Occupancy was 20 percent, with Jaruch and a dozen other tenants on board. Within six months, the mall’s management team had been replaced.

Slowly, things got better. The Dakota Bar and Grill opened in 1985, as did the Minnesota Children’s Museum. The following year a motel, the Sunwood Inn, began operating next door.

“Things looked promising for a little while,” Jaruch said. “There was a Victorian Christmas promotion and a beer festival in the summer, and you couldn’t get near the place at those times.”

Attracted by the prospect of a wider customer base, room to grow and lots of free parking, he had moved his gift shop there from Milton Square in St. Anthony Park. But Jaruch was never was able to turn a profit. He eventually left retail and today is an analyst with a state government agency.

Occupancy started to slide, dropping to 65 percent by 1989, with fewer stores attracting fewer and fewer customers. Wilder wanted out, asking the Port Authority to take over, which the agency did, reluctantly. Developers had defaulted on eight other Port Authority projects since 1984 and now the commercial real estate market was depressed.

Understandably, there was unease among the remaining tenants. Richard Henke, owner of the Malt Shop restaurant, told the St. Paul Pioneer Press that he worried about the mall’s future.

“The rents are too high for the volume of traffic out here,” he said.

The Port Authority considered converting Bandana Square entirely to offices but chose instead to concentrate retail on the first floor, offices on the second.

In 1991, an investors’ group paid $3 million for the property and made several attempts to rejuvenate it. Wellington Management bought it in 2003 for $6.1 million, eventually investing another $11 million to convert it into an office and medical center.

“It took us quite a while, and there was some pain involved,” Wellington said. “Some of the retail tenants didn’t necessarily want to leave.”

Today, an Allina Health Clinic is the anchor tenant, occupying half of a complex that is 96 percent occupied, the only empty space being the former home of the Twin City Model Railroad Museum.

“I love the historic connections that the building has, even though we have to get approval for every structural change we want to make because it’s on the National Register of Historic Places,” Wellington said.

“An office building may not be as exciting as a bustling collection of shops would be, but clearly that’s the best use for the site,” he added. “Bandana Square has a long and useful life ahead.”

Roger Bergerson chronicles our remarkable past each month in the Park Bugle.