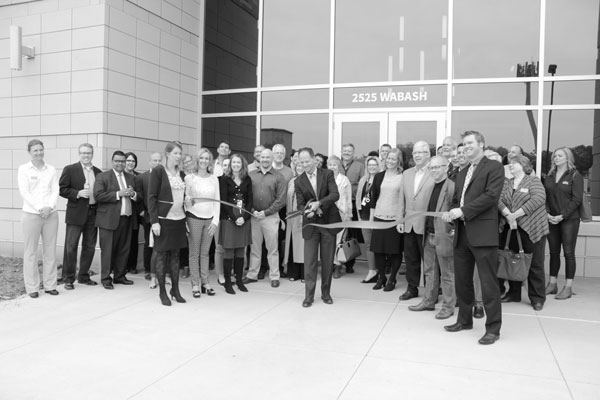 Sunrise Banks in St. Anthony Park is celebrating a century of service and community building.

Since the original bank charter was issued, there have been multiple name changes, facility expansions and product-and-service improvements. But there also have been constants, with first the Boss and now the Reiling families in ownership roles, and “so many hundreds of friendly faces and interesting people who have been customers over the years.”

“Sunrise Bank is where all walks of life, whether on two feet or four, connect and enjoy our community,” she says. “No matter what stage or season in life you are in, you feel a warm, inclusive, welcoming energy there.”

The 1963 Fourth of July parade marches past St. Anthony Park Bank on the left, in a building next to what is now Muffuletta. Photo by Glen Skovholt

Adds Terri Banaszewski, Sunrise vice president for business development, “We know our customers by name, by being a neighborhood bank, you get to be that way.”

St. Anthony Park State Bank first opened in 1916 and operated out of a room behind what is now Finnish Bistro. In 1917, the bank moved into its new building at 2250 Como Ave., directly across from the new St. Anthony Park Library. Both were designed by Charles A. Hausler and both opened in the same year, joining already-established institutions such as the Children’s Home Society and Luther Seminary. (Since Hausler worked for the City of St. Paul, the bank design must have been a private commission.)

The bank’s founders included Andrew Boss, a professor on the University of Minnesota’s St. Paul campus, whose son Wallace and grandson Andy would continue in leadership roles for the next 80 years.

A reorganization under new federal laws in 1933 enabled the bank to survive the Great Depression, and it grew steadily thereafter, to the point where the original building was expanded and remodeled in 1955.

In 1963, a parking lot was built behind the bank building and the first drive-in teller window installed. Ten years later, a new drive-in and walk-up facility was built at Como and Doswell avenues for customer convenience.

But the pressure to grow that success continued, and in 1986, the bank headquarters moved into leased space in a new building on the site of the former H.B. Fuller Co., directly west of the library. (It’s now the home of the Emily Program.) A branch at University Avenue and Vandalia Street opened in 2001.

Andy Boss, who Beeson regarded as a mentor and refers to as a “titan in the community,” headed up an ownership group that acquired the bank in 1970. When control was acquired by a bank holding company headed by Bill Reiling in 1993, Boss continued as president and served as a board member until 1999.

In 2008, what by then was known as Park Midway Bank moved into a brand new building on the site of its former drive-in facility, across from Tim and Tom’s Speedy Market.

And in 2013, David Reiling acquired majority ownership of the business from his father and merged the former Park Midway, Franklin and University banks into Sunrise Banks.

Customers remember favorite bank programs over the years, among them the Sparky Savers Club for youngsters and the Park Bank Diamonds-sponsored array of activities for seniors in the 1990s. Today there’s Park Perks, a coffee bar in the bank that raises money for small nonprofits.

The bank staff is a stable one, examples being Beeson with 30 years service and former vice president Mark Chapple for 47 years. The alltime champ, however, was undoubtedly John Hunt, who was hired in 1927 and served on the board until 1996.

An important aspect of the bank’s culture is its employees’ commitment to volunteerism, which includes working for and serving on boards of many non-profit organizations, Banaszewski said. In fact, back in 1980, the bank helped create the organization now known as the Nonprofits Assistance Fund.

“Not-for-profit banking has been a growing niche for us, as has community development lending with new markets tax credits and low income tax credits,” Beeson said. “Starting about 20 years ago, we evolved into providing more financing for local and small businesses as the larger banks increasingly focused on big business.”

“Rick was my loan officer back in 1990 when I proposed to buy the home,” said John Barker, owner of St. Anthony Park Home, the skilled nursing facility at 2237 Commonwealth Ave. “It took a while to work things out, but he and Andy Boss took a chance on me. The bank people have been supportive in good and tough times and have stayed connected to their customers even as they’ve grown.”

Sunrise today: On May 19, Sunrise Banks employees, city officials and members of area chambers of commerce look on as Dave Reiling, CEO of Sunrise Banks, cuts the ribbon at the company’s new headquarters at 2525 Wabash Ave., just west of Hwy. 280. The 57,000-square-foot building is part of the early transformation of the industrial area near the Minneapolis-St. Paul border called the Towerside Innovation District. The former industrial site just to the west of the building will soon see the development of a 600- to 700-apartment complex and a 2-acre St. Paul city park. Photo by Kristal Leebrick

The bank will host an expanded version of its annual Community Appreciation picnic on Thursday, Aug. 3. Instead of a lunchtime event, a celebration of the 100th anniversary will take place from 3 to 7 p.m. in the bank parking lot. There will be food, live music and kids’ activities and everyone is invited.