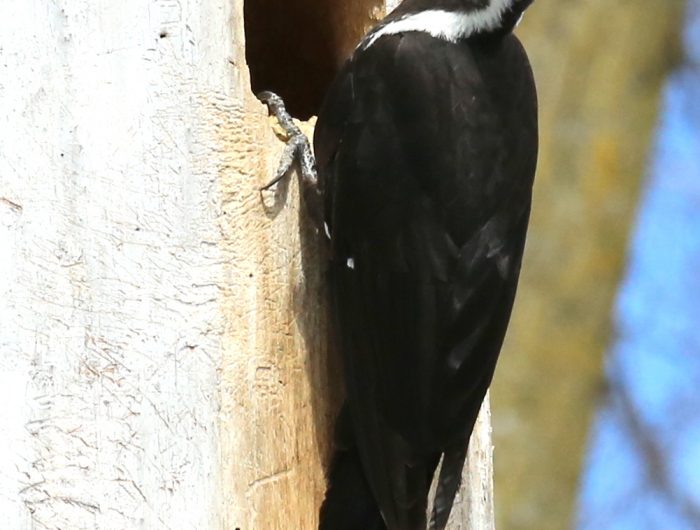 Beginning birding with a pileated woodpecker

When we first got interested in bird watching, my wife Jean and I decided to go on field trips with St. Paul Audubon to get more acquainted with the birds around us.

Our first field trip was west of the cities at Elm Creek Park Reserve, with about a dozen other birders.

We were going to look for owls, which meant we waited around for sunset before we got down to owling. And during that time, we watched birds at the feeders and flying by.

Whoever could identify a bird would do so, calling out the name, while the rest of us swiveled our heads in the direction he or she was pointing.

Someone shouted, “Pileated woodpecker!” and pointed toward the tree line to the north.

And there we saw a large, black bird making undulating, shallow scoops across the evening sky. I had never seen one before. It was huge, nearly as big as a crow, looking very determined in its flight.

I recently looked back into my Bird Watcher’s Life List and Diary and found the entry for that day was March 7, 1987, with a note saying, “First bird sighted and recorded. First St. Paul Audubon field trip.” It also mentioned that the temperature had hit 70 degrees!

The pileated woodpecker is the largest woodpecker in North America, except for the ivory-billed woodpecker, which has not been seen for many years and is probably extinct. It weighs more than 10 ounces; the downy woodpecker barely reaches one ounce. T.S. Roberts, an early Minnesota ornithologist, author of “The Birds of Minnesota” (1932), calls the pileated “the giant of Minnesota woodpeckers.”

Male and female pileateds both have “moustaches,” the male’s is red, the female’s is black. And both have that Woody Woodpecker flaming red crest.

The pileated woodpecker’s diet consists mainly of carpenter ants and the larva of wood-eating beetles. The woodpecker scouts the trees of the forest in the summer and fall, finding active ant and beetle populations, probably eating a fair amount of them, being sure to note the location of each colony so it can return in the winter to dig into the tree and supplement its winter diet.

The pileated’s tongue has a hard lance-like tip that’s barbed. The tongue is sticky, very useful for getting ants.

Pileated woodpeckers have zygodactyl feet (you don’t say!). That means they have two toes pointing forward and two toes pointing back. It allows them to hang onto a tree and navigate up and down. Most perching birds have three forward- and one back-facing toe. Their tail feathers are very stiff to help prop them in place while they hammer away.

I’ve seen a pileated woodpecker working around the base of a tree and wondered why it was down there. To me, it looked vulnerable so near the ground. It turns out that carpenter ants enter trees near the roots, so the pileated is there to greet them, and eat them, as they arrive at their new home.

Pileated woodpeckers can really damage a tree digging into it for ants and larvae. They usually create an oval-shaped hole, aligned vertically on the trunk, often through the living wood and into the decayed center portion of the tree. A typical pileated excavation can be four to eight inches wide and extend vertically a few inches to a foot or more.

The nest hole of the pileated woodpecker is more rounded. The nest cavity is large enough to hold three or four eggs and an adult. The male incubates the eggs at night. As the nestlings grow, the adults feed them leaning in head down from the rim of the entrance hole.

Eventually, the youngsters stick their heads out of the hole to beg for food. They fledge and can fly about 27 days after hatching. An adult will use the nest hole as a roost hole at night or in inclement weather, after the young have fledged.

Pileated woodpeckers don’t migrate. They defend their territory year-round and can be found across Canada, south to Florida, except the Keys and west to the Great Plains in East Texas. Their nesting tree can look like a condominium complex with several years’ worth of nest holes up and down it.

That day in March 1987 was a very special one. We also saw eastern bluebirds (bluebirds in Minnesota?), some red-winged blackbirds, a Fox Sparrow, an American tree sparrow (with the little “tie-tack” on its chest), but no owls! Jean and I went back a few weeks later and found one, but that’s another story.