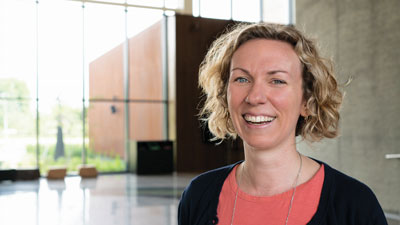 Holly Menninger, director of public engagement and science learning at the Bell Museum.

Holly Menninger, the director of public engagement and science learning at the newly opened Bell Museum near the St. Paul Campus of the University of Minnesota, prides herself on being a “science communicator.” Even if you didn’t know about her advanced degrees, her contagiously upbeat enthusiasm for natural history and her background as a media go-to on all things insects it takes only one anecdote to realize that this woman has powerful persuasive skills.

As an undergraduate, Menninger somehow persuaded her college roommate to share their dorm room with her pet flock of Madagascar hissing cockroaches. (About the size of a well-fed hummingbird, those are among the largest cockroaches known to science; they also take the honors as the average insectophobe’s Worst Nightmare.) “I love insects,” says Menninger by way of non-explanation, “ever since I was little.”

In some ways, Menninger’s current job is considerably easier than coaxing a friend into sleeping in a space shared with monster cockroaches. Nowadays she need only communicate her passion and delight for the natural world in such a way that inspires Minnesotans everywhere “to get out and take the next step” to appreciate and interact with the “rich biodiversity” of our landscape.

Menninger thinks one of the best ways to take that next step involves the “citizen scientist” movement. Although the notion that amateurs can advance the frontiers of knowledge has been around at least since the era when Ben Franklin managed to find time to invent the lightning rod, bifocals and compound interest, we all needn’t be as prodigiously gifted as the founding father to aid in the collection of data and the recording of meaningful scientific observations.

Ordinary people can extend the reach of science by working in partnership with researchers, and Menninger is determined to offer opportunities at the Bell Museum to suit every kind of budding scientific curiosity.

There are the discovery stations in the Minnesota Journeys area of the museum, where videotaped invitations from working scientists explain exactly what visitors can do individually to help promote that researcher’s project.

In the Prairie and Savannah section, for example, there is a kiosk where visitors to the museum can watch a videotaped presentation by Professor Marlene Zuk of the U’s College of Biological Sciences on her study of the mating habits of crickets. A related video leads the viewer to the monarch larvae-monitoring project where another researcher explains how people can sign on to observe a specific milkweed patch for signs of the beautiful (and endangered) butterfly species.

In another area of the museum, a kiosk explains to prospective citizen scientists how they can participate in the Minnesota Bee Atlas, a project that draws on volunteers to map and study the habitats of native bee populations. For those whose interests focus on a more celestial plane there is Exoplanet Explorers, a project overseen by Professor Chick Woodward of the U’s Institute for Astrophysics, which invites amateur astronomers to help process data involved in the identification of other star systems in the galaxy.

Projects like these belong to the Zooniverse, “the world’s largest and most popular citizen science platform,” which was co-founded by U Professor Lucy Fortson. It has connected research teams with volunteers in more than 100 projects, ranging from “anthropology to zoology.”

Thanks to a handy link on the Bell Museum website, potential volunteers can match their interests and skills to other projects as varied as the Minnesota Biodiversity Atlas — a digital transcription of data that has been collected over the last 100 years on the changing ecosystems of our region — to Wasp Watchers — a group dedicated to detecting the presence of Cerceris fumipennis(aka the smoky-winged beetle bandit wasp), an insect harbinger of the dreaded emerald ash borer threat. There is even a project for military history buffs. Decoding the Civil War invites volunteers to decode and transcribe the messages of the Civil War-era U.S. military telegraph.

Many would-be citizen scientists would not need to go far afield to do their work. They can participate in projects that will make use of the new Bell Museum’s much-enlarged grounds.  “We have a 5-acre outdoor learning landscape . . . which includes native prairie, rain garden [and other environments],” explains Menninger. “People can help document bio-diversity right on the grounds” using the app iNaturalist.

iNaturalist is already well-known to citizen scientists for its annual April City Nature Challenge, where municipalities recruit volunteers in a competition to document the most biodiversity in an urban setting. In Minnesota, this year’s challenge took place immediately following the worst April blizzard in local history. Menninger reports that, perhaps not coincidentally, the Twin Cities “had the biggest uptick in participation of any city in the challenge.”

Menninger says that one of the most important benefits of programs at the Bell is to facilitate the “opportunity for people to make personal connection with working scientists.” In the Saturday with a Scientist programs at the Bell, for example, scientists in various disciplines will share their knowledge and enthusiasm with the public. “We’re bringing in a diverse array of researchers,” says Menninger. “We want our visitors to see elements of their own background.”  And, for the younger ones, “we want them thinking about science as a career.”

For Menninger, coming to the Bell Museum has been something of a matter of bringing her own career full circle to its starting point. “When I was in high school,” she explains, “my first job was at the Cincinnati Museum of Natural History.” An undergraduate degree in entomology and a doctorate in ecology followed, and Menninger set her sights on an academic career. The emergence of the 17-year cicada in 2004 in Washington, D.C., while Menninger was a grad student at the nearby University of Maryland, changed her trajectory. As an entomologist with a knack for “making complicated ideas accessible,” Menninger was suddenly in demand as a media expert who could help the public make sense of the life cycle of the newly hatched cicadas.

“My first interview was on CNN,” she recalls. She went on, in a later job, to run her own science-based radio program at Ithaca College in upstate New York.

The opening of the Bell Museum in its new home “gives us a new opportunity to tell the story of Minnesota’s natural history, Menninger says. Not just what it is, but how we come to know and understand it.”

For Menninger, the chance to work for a place like the Bell gives her “the best of both worlds. We’re deeply connected to the University of Minnesota [and we are] a situation of informal learning, as well.”

Find out more about the options for citizen scientist involvement at the Bell Museum and the Zooniverse at www.bellmuseum.umn.edu/citizen-science.