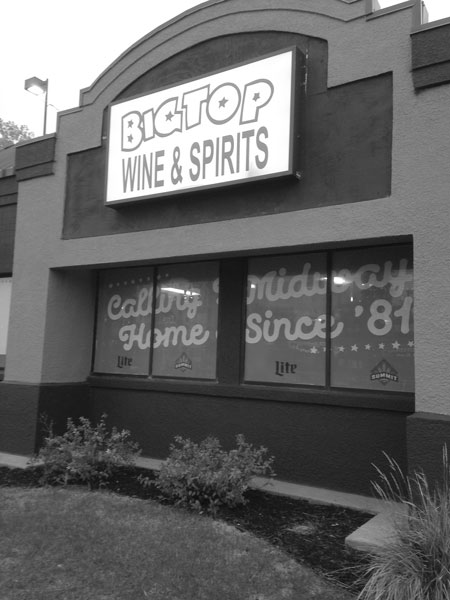 Big Top Liquors, one of the retail legacies of venerable grocer Sid Applebaum, has a new home.

At the ceremony, co-owner Jay Applebaum told local dignitaries that Big Top “was started by my father [the late Sid Applebaum] almost 40 years ago.” The store’s temporary home is smaller than its previous 16,000 square footprint, he said. Because of heightened competition in the retail industry, “we need to be more efficient,” Jay Applebaum said.

The Applebaum family has had a retail presence at the intersection of Snelling and University avenues for more than 60 years, according to Nancy Rosenberg, co-owner and Jay Applebaum’s sister.

“We are very proud of turning a decaying Perkins location into a temporary liquor store that is attractive, hip, urban, fun…for our neighbors,” Rosenberg said.

“My dad, Sid Applebaum, lived his life in retail,” she continued, noting his stores included Applebaum’s Food Markets, National Tea, Rainbow Foods, Holiday Foods and Big Top Liquors. “He worked every day until he died at 92, a little more than two years ago.”

Despite many changes at the University and Snelling avenue intersection_ including a revamped roadway to accommodate the light rail transit “green line_ “we have survived,” Rosenberg said. New promotions and marketing have contributed to Big Top Liquors’ longevity.

For example, “we have developed a ‘flash sale,’ The Tuesday Dash, which has been praised by our wholesalers as the most innovative program in the state,” Rosenberg said. “We feature weekly bargains that must be ordered online on Tuesday and then can be picked up at our stores on Friday. We often sell over 200 cases of wine and 1,200 six-packs of beer in three hours or less.”

Rosenberg and Jay Applebaum anticipate Big Top Liquors will occupy its temporary space for up to three years before it finds a permanent home near its old Midway district location.