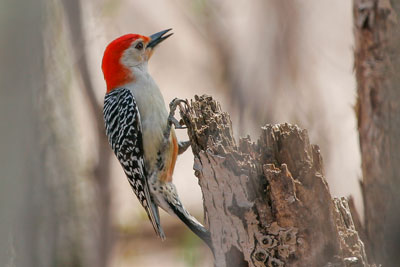 Birdman of Lauderdale: A bird’s bill indicates the food it eats and helps identify it

The idea for this column came to me last March. It was given to me by a male red-bellied woodpecker.

When a red-bellied lands on the suet feeder out in my yard, I usually grab my binoculars to check out whether it’s a male or a female. The red on the head of the male starts at the base of the bill and goes up over the head and down the nape of the neck. On the female, it starts at about the top of the head. There may be a blush of red behind the bill, but then there’s no more red till the top of her head.

I had my binocs focused on this red-bellied woodpecker when I noticed that his upper beak was broken. The last half-inch or so of the tip was missing. It ended in an abrupt, but clean, vertical cleft.

As the bird worked on the suet, I could see his tongue flicking out and back through the groove in the lower mandible. The tongue was as thin as a thread. I wondered how the injury had happened.

My peanut feeder is a steel tube with holes in it that the birds peck through to get at the shelled peanuts. Had this bird broken his bill striking the steel or getting his beak stuck in one of the holes? Or had the woodpecker been pecking at a tree trunk and hit a knot? Whatever it was, it must have been something violent to break off so much of his bill.

Even with half his upper bill missing, the bird didn’t seem to be deterred, pecking away at both suet and peanuts. He used his lower beak, whacked at the food, pried a chunk loose, clamped it using what remained of his upper beak and then gulped it down. The woodpecker returned to our feeders nearly every day.

How would he do with such a severely broken beak? I could certainly identify him, and so I checked him out with my binocs every time he showed up.

Do birds’ bills grow back? Or was this guy doomed to a partial beak for the rest of his life?

He was able to forage for food, but I would imagine he wasn’t excavating any nesting cavities with such a blunt upper bill.

Over the weeks and months of our rainy spring, this woodpecker’s bill showed a gradual lengthening. It even tapered as it grew, looking like it would end in a point like it had originally.

I did a bit of research and learned that a bird’s bill is composed of keratin monomers and chitin that assemble into bundles. This gives the linear aspect to the bill. The bundles are tough and insoluble.

Birds’ bills can grow from 1 to more than 3 inches a year. So this red-bellied woodpecker just needed time and good health to restore that last half-inch of his upper mandible.

The Norman Bird Sanctuary in Middletown, Rhode Island, has a posting on bird beaks that describes how you can often get a clue to bird identification by its bill shape. And the bill usually says a lot about what the bird eats.

For example, my woodpecker has what’s called a chisel-type bill: long and chisel-like for boring into wood to eat insects, but also to chisel out a nesting or roosting cavity in a tree.

Sparrows and cardinals have a cracker bill: short and conical for cracking seeds.

Birds of prey have shredder bills, hooked and very sharp, that enable hawks and owls to tear meat into bite-sized pieces.

Hummingbirds use their probe bills to get nectar out of flowers, but also to snap up the occasional tiny gnat or spider for some protein.

Some ducks have strainer bills, long, flat bills that strain small plants and animals from the water.

Herons, egrets and kingfishers have spear bills they use for fishing.

Finally, there’s my favorite, the American crow with what’s described as the Swiss Army knife bill, a multipurpose beak for its omnivorous diet of fruit, seeds, insects, fish and other animals.

If you can get a look at a bird’s bill, you can get a good idea what foods it prefers and help with identifying the bird. And if you see a bird with a broken beak, you have some assurance that, if it can keep getting nutrition and defending itself from predators, that beak will grow back over time.

Clay Christensen watches and writes about birds from his home in Laud- erdale. He blogs at www.BirdmanofLauderdale.com. His book, The Birdman of Lauderdale, is due out in November.