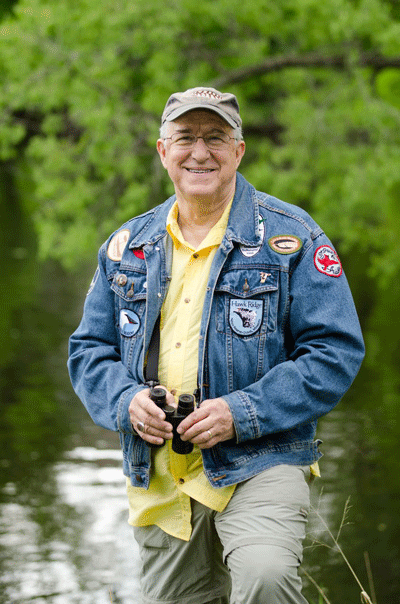 Clay Christensen, the Birdman of Lauderdale (Photo by Chase Vanderbilt)

Unlike the fictional characters with similar names—you know, the ones starting with Super-, Bat-, Spider- and so forth—there’s no mystery about the identity of the Birdman of Lauderdale.

Clay Christensen leads bird walks, gives talks, conducts bird surveys and for nearly 10 years has been making bird watching accessible and fun through his Park Bugle columns, a collection of which has just been published in book form.

An early reviewer had this to say:

“Reading (The Birdman of Lauderdale) is like going birding with Christensen, then closing the afternoon with a cup of coffee or glass of beer,” posted Jim Williams, Minneapolis Star-Tribune columnist, birder and blogger. “He’s good company. He tells sharply seen stories.”

Christensen recalls that he started bird watching about 25 years ago, when he and his wife, Jean, were walking around Lake Como and became intrigued by some large black birds that turned out to be cormorants. He was hooked.

Gradually, the Birdman, as his wife began calling him, got more and more involved in the pastime, honing his skills and becoming an active member of the St. Paul Audubon Society, serving as chapter president at one point.

A lot of his personal bird watching is done simply by looking out the windows of the Malvern Street home in Lauderdale where the Christensens have lived for more than 40 years and raised their family. But he’s also birded in the Peruvian Amazon, Ecuador, the Dry Tortugas off Key West, Fla., and on pelagic trips off the California coast, among other places, as well as across the United States and Canada.

His favorite spot locally is Reservoir Woods Park in Roseville, particularly the portion just east of Dale Street that shares the dog park entrance on the north side Larpenteur Avenue.

“I’ve seen black-billed cuckoos, pileated woodpeckers and great horned owls there,” he said. “It’s surprisingly varied habitat for being in the city.”

He’s got a regular coterie of birding buddies who are familiar with Christensen’s enthusiasm for electronic gadgetry, high-tech clothing, Culver’s ice cream and an occasional glass of Guinness.

“Clay is not averse to anthropomorphisms,” observes one such friend, Ellen Lowery. “After observing mating birds take a break, he commented, ‘Now they’re having a cigarette.’ ”

Adds Julian Sellers, “Whenever we have to retrace our steps, Clay says, ‘Oh, good! Now we’ll see the other side of the birds.’ ”

Christensen estimates he’s led 100 bird walks over the years. One example is a nighttime owl search during the annual St. Paul Audubon Warbler Weekend at Frontenac, Minn. Things can get a little dull if the owls aren’t cooperating and Christensen uses jokes and puns to liven things up. If a dog is heard in the distance, that becomes a “Barked Owl.” A train: “A Great Northern.” Sure, some of the quips may have a few miles on them. One fellow was brought on the owl walk by his parents and then returned 10 years later with his fiancé. “Same jokes,” he later told his mother.

Christensen took up writing during a career transition and wrote a few general assignment stories for the Park Bugle before then-editor Dave Healy gave the go-ahead for a bird-watching column in 2004. About 80 installments of “The Birdman of Lauderdale” have appeared since.

“Clay has introduced many new people to the pleasures of bird watching, with his nonjudgmental and humorous style,” says Val Cunningham, Minneapolis Star-Tribune bird columnist and member of the St. Paul Audubon Society. “And his columns are in the same vein, bringing the world of birds and bird watching to a broad audience.”

Levins Publishing editor Jane Dickerson had read and enjoyed the columns over the years and after listening to Christensen give his highly entertaining “In Defense of Crows” presentation, asked him if he was interested in doing a book. He was indeed.

“Clay is so friendly and charming and I think that really comes across in the book,” Dickerson said.

Roger Bergerson writes from his home in Como Park.