Birds on a Winter’s Night

When I was in high school, I was in a VFW-sponsored marching band. We played parades and festivals all over the state and were loaded into a school bus to get to them. We sang nonsense songs to pass the time going to and returning from our performances. One of our favorite tunes had to do with the fate of a poor robin in each approaching season. The last verse (winter) went:

And what will the robin do then, the poor thing?

He’ll fly to the south

With a worm in his mouth

And tuck his head under his wing, the poor thing.”

One of the nonsense parts of it was to see who could maintain the note for lo-o-o-o-ng the longest. Boy, we sure knew how to have fun back then, eh? 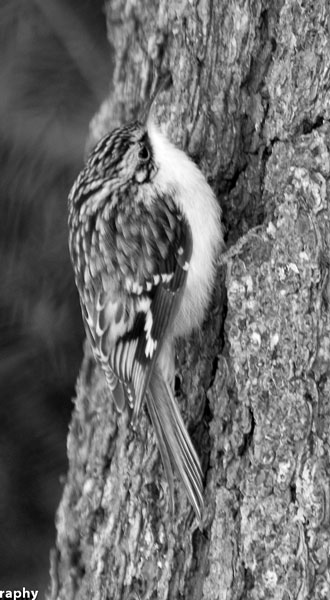 Anyway, not every bird species migrates south for the winter. Black-capped chickadees, for example, spend the winter here. They are not great long distance fliers, so they have to work out ways to combat the effects of winter.

Most birds fluff their feathers to provide air pockets of insulation. Chickadees can get to roughly twice their size by fluffing.

Birds also shiver to generate warmth. They activate opposing muscle groups, giving them contractions without the jiggling we humans experience. But shivering eats up fat resources.

Some birds, including chickadees, can enter what is called regulated hypothermia. They can lower their body temperature by up to 15 degrees, which means they don’t have to burn as much body fat to keep warm. It’s very important, though, for them to build up fat reserves during the day so they can make it through the night.

Years ago, I bought a wren house that was advertised as convertible to a winter roost box for chickadees. You could reverse the door so the entrance hole was toward the bottom. It came with a set of six pegs that mounted on the inside of the box. Chickadees could supposedly gather in there on a cold winter’s night, have a perch to themselves, and weather the storm.

All good, except I learned later that chickadees usually roost alone on winter nights. A friend told me that you could tell if a chickadee had roosted in a tight cavity because its tail was bent slightly to one side when it emerged first thing in the morning. Sounds worse than a bad hair day!

Despite the habits of chickadees, several bird species do gather in cavities to keep warm. One well-studied group is golden-crowned kinglets, one of the very smallest birds known to humans. They can use the regulated hypothermia technique mentioned earlier. Well-known author, researcher and scientist Bernd Heinrich has written about these little birds in “Winter World: The Ingenuity of Animal Survival,” a great book that covers birds and animals in winter.

Also, golden-crowned kinglets have a special call they use as they approach their sleeping place, attracting members of the troop that has spent the day foraging together, Heinrich notes. A second assembly call signals it is time to draw into a cluster.

Another bird species, brown creepers, can also pack into a cavity. On one of our winter bird walks, our Monday-morning bird group saw a cavity in a tree along Minnehaha Creek where three creepers had wedged themselves in overnight. It was tight quarters!

Meanwhile, woodpeckers sometimes spend the fall chiseling out roost holes for use on winter nights. One risk of flying to a roost hole for the night is that it may already be occupied. Then a bird could be facing the beak of the resident “rooster” instead of its own snug, warm cavity for the night.

Crows present a special case of winter night roosting. You can usually see them flying to their roost site late in the afternoon. Here in the metro area, they have used Loring Park and Peavey Field Park, near the Phillips Eye Institute in Minneapolis.

Crows may prefer to roost near hospitals, shopping centers and municipal buildings because we humans light up the night for them. If they get attacked by a great horned owl in the middle of the night, it helps if they can see a clear escape route and be able to find their way back into the roost after the danger has passed. Crows roost in a particular pattern, with older birds toward the center of the roost, younger ones at the edges. Ah, the wisdom that comes with age!

Birds that stay here in the north over the winter have had to come up with ways to make it through this season’s many cold nights. I really can’t complain about facing the cold with all the advantages inherent in being a human.

Clay Christensen lives and writes in Lauderdale. His book “The Birdman of Lauderdale” is available in metro area Half Price Books stores.