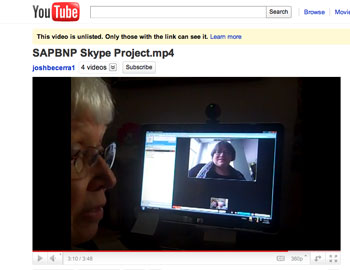 One of the many services the block nurse program offers is Skype training for seniors. Here, Opal Hedberg leads a Skype tutorial on YouTube.

Senior citizens aren’t what they used to be. Just ask Mary Hayes, program coordinator of the St. Anthony Park Block Nurse Program. The program was created in 1981 to help seniors live at home independently by providing in-home nursing care.

Today, the focus is less on nursing and more on preventative programs, help with transportation and daily tasks, and recreation.
And as the program celebrates its 30th year, the name is changing along with the seniors who participate in its services.

“Two years ago the board did a survey of seniors, clients, volunteers and caregivers, and the response was, ‘It’s a great organization, but we don’t know what you do,’ ” Hayes said. “The title does not speak to what we do anymore. It’s not so much nursing because there are more home healthcare services attached to hospitals and insurance programs,” she said. The program had 320 clients enrolled last year but only 21 accessed nursing care through the organization.

“They aren’t the same seniors as 30 years ago,” Hayes said. Today’s seniors are living longer and are in better health. “But they are new at being old. They want information.”

This year, in celebration of its milestone anniversary, the program is sponsoring a film and speaker series at St. Anthony Park Branch Library the second Saturday of each month. Subjects have ranged from “dying with dignity” to Alzheimer’s disease to adapting to life without a car (which happened to be the least-attended film, Hayes said). The July film, Plan Ahead: THINK Outside the Box, takes a look at funeral pre-planning.

There are two blood pressure clinics offered each month and Arthritis Foundation exercise classes held throughout the week at various locations. A partnership with the Leisure Center Senior Program at St. Anthony Park United Methodist Church includes a hot meal for seniors and guests every Wednesday at noon. And each month seniors can participate in fun activities such as seeing a production at the Ordway, having lunch at a Stillwater restaurant or taking a historical tour of the Twin Cities.

Recently the program facilitated Skype training for clients who wanted to learn how to access the computer software program so they can simultaneously communicate verbally and visually with loved ones who live far away. With the help of the St. Anthony Park Community Foundation, a video was created (it’s on YouTube; search for SAPBNP Skype Project) that takes seniors through a step-by-step process of using Skype to help them stay in touch with loved ones who are far away.

“One woman—Opal Hedberg—who has a daughter in Paris [France] and one in Vancouver [British Columbia] set up a Skype account and there’s a video on YouTube where she shows how to do it. We set up nine clients with camcorders so they could access the program,” Hayes said. Josh Becerra, a member of the community foundation, helped film Hedberg’s tutorial and post it on the web.

And then there are the rides that the program facilitates between volunteers and clients and the local teenagers who help seniors with lawn and household chores.

The St. Anthony Park program was the first block nurse program in the country. The model has been replicated throughout the state since then. Today, there are 43 similar programs in Minnesota, 16 of which are in St. Paul.

Dr. Ida Martinson—who was a professor of nursing, a St. Anthony Park resident and a member of the National Institute on Aging at the time—is credited with initiating the program. And it was an article written by JoAnne Rohricht in the December 1981 Park Bugle about Martinson’s attendance at the 1981 White House Conference on Aging and her ideas on creating a community nursing program that could help elders stay in their homes that grabbed the attention of the community.

Rohricht hosted an organizational meeting at her St. Anthony Park home and within weeks Martinson found herself on a plane seated next to a businessman from H.B. Fuller who suggested she talk with former Fuller president Elmer Andersen (who happened to attend her church) about start-up funding. The company gave them $7,000 to begin the project, Rohricht said.

St. Anthony Park Area Seniors is planning a number of celebratory events before the year is over, including an appreciation dinner for the programs founders and volunteers.

But next up: The Fourth of July parade down Como Avenue. Look for the red Twin Cities Trolley that will be carrying seniors down to Langford Park. After the parade, the trolley will offer free rides around the park until 1 p.m.