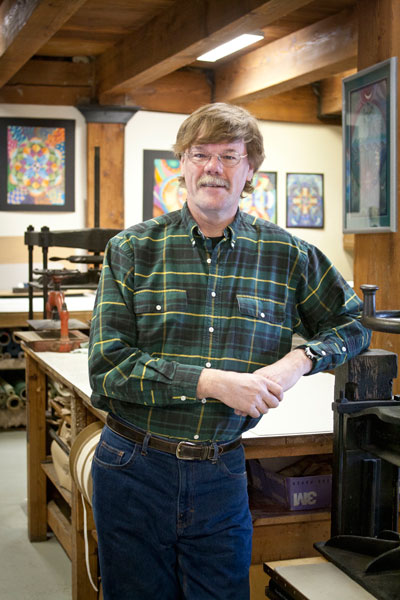 The machine is the size of an old-fashioned refrigerator, an impression that is reinforced by its antique ivory enamel sides emblazoned with the name “Polar.” Like all the machinery in the shop, it’s at least a half-century old.

A tall man with a shock of chestnut-colored hair centers a 3-inch half-sewn sheaf of paper in the middle of the work surface; then he steps back slightly and applies his thumbs to two widely spaced knobs. Instantly it becomes clear why this machine is called a guillotine paper cutter. A horizontal blade flashes and a long curl of neatly severed paper pulls away to reveal the edge of what will eventually be a very thick book.

For Jeff Dahlin, the owner and nearly the sole operator of the E&L Bindery, it’s just another day at work at the business he’s owned since 1988.

Located in the industrial district of south St. Anthony Park, E&L Bindery has the slightly otherworldly air of a time just out of reach of modern memory. Rows of antique books line the shelves, and two tabby cats named Dickens and Petunia curl up in unused armchairs. Large purposeful machines made of metal and wood dominate the floor space. In the work area, there is no plastic and no computer.

“When I started in the business,” says Dahlin, “Our bread and butter was archival stuff—doctors wanted bound rows of medical journals; we bound dissertations. But all that is online now.”

The business that remains includes archival volumes of small-town newspapers, family histories, genealogies and an occasional art book, like the recent volume of images by local painter Anders Himmelstrup.

Sometimes there’s a self-published novel to be bound, and occasionally a couple will commission a gold-stamped, leather-bound volume of the emails that punctuated their courtship. “There’s still nothing as archival as paper,” notes Dahlin.

But more often a bindery finds itself on the wrong side of the digital divide these days. The Twin Cities’ daily newspapers no longer bind back issues, nor do area libraries. That’s what the Internet is there for. “I guess I am in the sunset of the industry,” says Dahlin, “but for me, it’s not melancholic. It’s my living and I consider myself lucky to have fallen into this trade, this craft.”

Besides, Dahlin has a sideline. For two decades he has played Master Loose-leaf, Bookbinder at the Renaissance Festival in Shakopee. “We demonstrate papermaking and we’ve got a reproduction Gutenberg Press,” he says. “I can be seen seven weekends a year out there in tights.”

As Dahlin recounts it, it was more chance than fate that propelled him into binding. “I was pre-dentistry for most of my career at the University of Minnesota,” he says, noting that he also studied business, thinking that the skills would help him run his dental practice someday. But Dahlin was not meant to spend his life looking at other people’s molars. In 1988, he was working at the Post Office when a friend told him that the bindery was for sale.

“I didn’t know a thing about the business, but I was handy and I saw the neat old equipment,” he says.

In the beginning, he relied upon the bindery’s sole employee. When she was hired away by a competitor, “it was sink or swim,” he says, “so I figured things out. Back then, I didn’t know what quality was.”

He has come to appreciate the elegance of his craft, even occasionally working as a design consultant for a special volume. “I’ll pick the material for the covers, the foil stamp for the [printing]. It’s a nice little niche for me. I’ve grown to love what I do.”

Along the way he’s made some interesting contacts. “When First Lady Michelle Obama gave a commencement address at a college in Iowa, the music professor had written a fanfare for her,” he says. Dahlin was commissioned to produce a special presentation binding for the music manuscript.

Back in the days of the old Dayton’s Department Store eighth-floor Christmas displays in downtown Minneapolis, Dahlin often got an advance look at the year’s theme when he did a presentation binding of the storyboards for it. He worked on displays inspired by works by Dr. Seuss and Maurice Sendak among others.

Then there was the time he had to make a presentation box for a human skull. He doesn’t remember the specific circumstances that produced that commission, but he does recall “the box was covered with pink frilly material and beads.”

Another job for the U.S. Customs Service was far more exacting. An agent brought in a Spanish-language cookbook that was exhibit A in a smuggling case involving counterfeit U.S. money. When the inside cover was sliced open, it revealed an inner cavity stuffed with phony $100 bills. The authorities had dusted the counterfeit money with special powder that would leave incriminating traces on the hands of whoever handled it next. Dahlin’s job was to avert criminal suspicions by rebinding the book so that it looked just as it had before it fell into the hands of the law. The only catch was he had to work a little faster than his normal two-week turnaround time.

“A Customs agent had to accompany the book at all times [night and day],” he says.

At age 55, Dahlin is meditative when he considers the future of his craft. Never married, the St. Anthony Park resident has no children to whom he might leave the business. “I ponder what the future of hard copy and books is,” he says. “Is it nature or nurture to want to hold a book? People my age feel a sense of permanence [in a book]. But [for] kids raised with Kindles and iPads, will the importance of having hard copy be lost? I have no answers.”

Then he recalls something he learned at the U. “In business school, they talked about buggy-whip makers.” A thriving trade at the dawn of the automotive age, but “by the end, there were only one or two. There’s sort of an analogy there.”