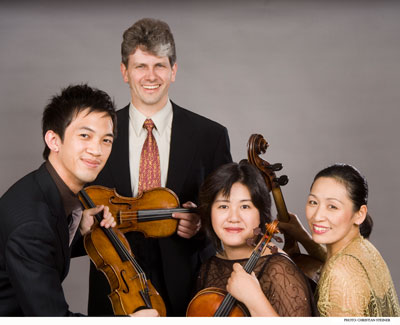 The Schubert Club’s Music in the Park Series will kick off its 2015-16 season on Sunday, Sept. 27, with a performance of the Borromeo String Quartet, featuring violist Kim Kashkashian.

Kashkashian is the winner of the 2012 Best Classical Instrument Solo Grammy for her recording of Kurtág and Ligeti.

The performance will be held at 4 p.m. at St. Anthony Park United Church of Christ, 2129 Commonwealth Ave. A preconcert conversation will begin at the church at 3 p.m.

The series will continue through April with the following concerts:

Sunday, Oct. 25: Trio con Brio Copenhagen, hailed for their “unique sound and unity of interpretation,” will make a welcome return to Music in the Park. Founded in 1999 in Vienna by violinist Soo-Jin Hong, her sister, cellist Soo-Kyung Hong, and pianist Jens Elvekjaer, these musicians have acquired a worldwide reputation for the freshness of their approach to the core repertoire.

Sunday, Nov. 22: Invited back after their stunning debut on Music in the Park Series in the 2013-14 season, Windsync, a young, energetic wind quintet, will return with a program of music inspired by Shakespeare, including their own arrangement of Prokofiev’s “Romeo and Juliet.” Playing exclusively from memory, WindSync engages audiences of all ages with creative and interactive concerts that incorporate elements of theater.

Sunday, March 13: The Ebène String Quartet has grown to become one of today’s foremost quartets on the international chamber music scene. Making their Minnesota debut at Music in the Park Series, the Ebène will perform quartets by Haydn, Debussy and their own arrangements of works by the likes of Miles Davis, Astor Piazzolla and the Beatles.

Sunday, April 17: Quartet-lab, Four musicians with international solo careers, including the St. Paul Chamber Orchestra’s newest artistic partner Patricia Kopatchinskaja, formed a string quartet in 2013 with a mutual desire to experience and experiment with the string-quartet repertoire. The quartet’s debut tour at major European venues received five-star reviews. Their Music in the Park Series concert will feature works by Kurtág , Bartók and Beethoven.

All Music in the Park Series concerts are held at St. Anthony Park United Church of Christ. They begin at 4 p.m. and each is preceded by a preconcert talk at 3 p.m. Single tickets are on sale for any of these concerts. You can buy tickets at by calling the Schubert Club box office at 651-292-3268 or go to Schubert.org and click on “Tickets.”