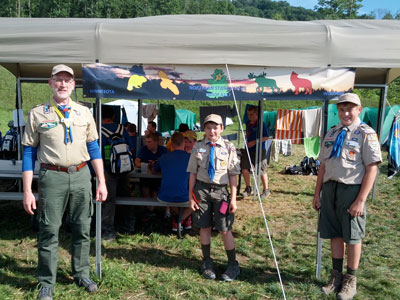 At 5 a.m. on July 12, nearly 225 Boy Scouts and Venturing Scouts and their adult leaders from Minnesota’s Northern Star Council boarded seven coach buses at the Minnesota State Fairgrounds, bound for the National Boy Scout Jamboree in the mountains of West Virginia, near the town of West Hope.

Three members of Boy Scout Troop 17, which is sponsored by St. Anthony Park United Church of Christ, were in the group. Scouts Ethan Helmer and Ben Schafer and Scoutmaster Jerry Wallace had been preparing for this adventure for nearly 18 months.

Wallace can’t recall any other boys from Troop 17 attending a National Jamboree in at least the 12 years that he has been scoutmaster.

On the way to West Virginia, the contingent stopped at the Museum of Science and Industry in Chicago, the Indianapolis Motor Speedway and NCAA museums in Indianapolis, and the Museum of the U.S. Air Force in Dayton, Ohio.

Ben Schafer said he was grateful to have the opportunity to attend the event. “I have been on many adventures since joining Boy Scouts,” he said, “but this [was] on a completely different level from what I’ve done before.”

Held once every four years, the National Jamboree draws tens of thousands of Scouts, Venturers, volunteers and staff from all over the country. The 10-day event helps prepare youth to face and overcome challenges and gives them the opportunity to camp out, meet new friends, try high-adventure activities, learn new skills, work on merit badges and enjoy the outdoors. There were also exhibits, entertainment and service projects Scouts could complete in the nine counties surrounding the jamboree.

The first jamboree was held in 1937 and was attended by more than 27,000 Scouts who camped on the National Mall under the Washington Monument. Since then, 17 jamborees have been held. Helmer’s grandfather was at the 1964 jamboree at Valley Forge, Penn.

“My grandfather . . . was part of the Parade of States that walked across the stage before President Lyndon Johnson,” Helmer said. “Grandpa carried a canoe representing Minnesota. He’s the main reason I got interested in attending the jamboree.”

The 2013 jamboree was the first to be held at the Summit Bechtel Family National Scout Reserve, the jamboree’s new permanent home in the wilderness of West Virginia. Some 30,000 Scout and Venturing participants and 7,000 staff and adult leaders attended.