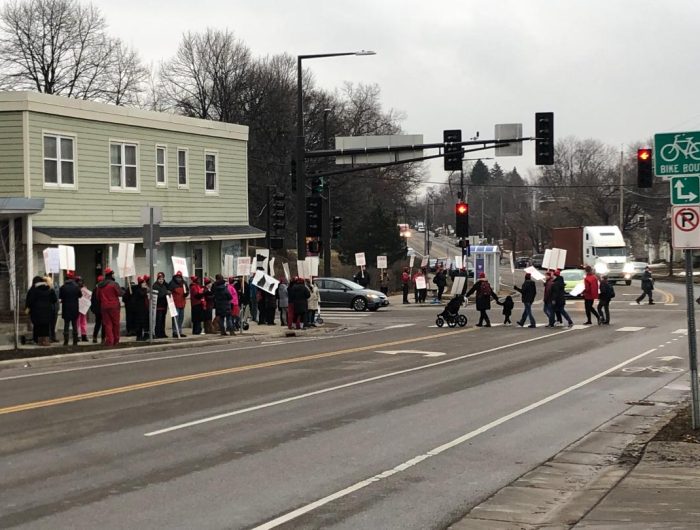 At 5 a.m. on Tuesday (March 10), cell phone screens across Saint Paul woke sleeping families with the message that school was cancelled for the day.

The texts read, “All St. Paul Public Schools and activities are canceled TODAY, due to a Saint Paul Federation of Educators union strike.”

While teacher and district representatives have huddled in closed-door meetings, kids in the neighborhood have been out enjoying the spring-like weather. The St. Anthony Park branch library offered students a free Lego building event Wednesday. Langford Rec Center is open an hour earlier to students while the strike persists. The Como Park Zoo & Conservatory is also offering full-day pop-up camp experiences.

So far, the strike is novel to families, but no one knows how long it will last. “We’ll see how long the honeymoon lasts,” one parent said.

The top priority for many SPPS families has been figuring out childcare for young students while schools are closed. Families report that support is coming from grandparents, flexible working arrangements and friends.

Stacey Dehn, mother of two Capitol Hill students said that she and her husband “are lucky enough to have flexible salary jobs, so have been splitting care, alternating working at home.”

Emma Connolly, mother of two SAP Elementary students, explained, “I was able to work from home [Tuesday]. [On Wednesday] my kids were with my sister-in-law. She works in education for another district and is on spring break this week. It will get tricky next week.”

Older SPPS students have also been staying busy by, among other things, working on homework, caring for younger siblings, nanny-ing for neighbors and hanging out with friends. Also, some students have been marching in solidarity with their teachers.

Greta Seppanen, an eighth grader at Murray Middle School, has been picketing with her teachers, demanding more support teams in her school. “I feel really empowered but sad to see my teachers putting their jobs on the line for me and my fellow peers,” she said. “It’s also quite cool how all the teachers and educators in St. Paul are coming together to fight for the schools their students deserve.”

And while Como Park High sophomore Soren Sackreiter has also joined the teachers’ picket lines, he has some concerns.

“I wish [the strike] didn’t have to happen.” Sackreiter said. “It’s not a good model of problem solving for the students and puts students that are preparing for AP tests behind in their studying.”

Como Park High School senior Molly Swanson said, “I think that what the teachers and educators are fighting for is very important, especially with the mental health crisis happening with teens and preteens right now. But I don’t know how much will actually get done from this strike.”

Eighth grade Murray student Kai Sackreiter marched with his teachers and friends but isn’t afraid to ask the question at the heart of this strike: “I would like more explanation as to where the money [for added support] would be coming from, and what else would lose funding as a result.”

Teachers picketing in the St. Anthony Park neighborhood on Wednesday generally reported feeling affirmed by the public’s response. Students and their families have joined educators, holding signs and walking along Como. And supportive neighbors and parents have brought snacks and coffee.

Phil Carlson, father of two SPPS students- a graduate and a senior at Central- said, “Teachers are some of my true heroes, for what they are committed to and what they deal with every day.”

Mary Callahan Schreiber plans to visit her children’s teachers on Friday, bringing coffee and her support to the picket line. “I have 100 percent confidence in my kids’ teachers in the classroom, and so it feels natural to trust that through 284 days of bargaining and negotiations they have been asking for what they need to make school the safest, healthiest, most inclusive place possible. I see the fact that SPPS educators have walked out of the classroom and onto the streets as their last resort. They’re brave for doing just that.”

Many parents said they believe the schools as being underfunded and in need of more support. Connolly noted, “I’ve felt a bit flustered [about childcare] this week, but 100 percent support the teachers. It’s amazing to think about everything they do each day for our kids and what they put up with so many budget cuts happening every year.”

Rachelle Hill and Andrew Schmnidt, parents of a Capitol Hill first grader, see a gap between yesterday’s school budgets and today’s demands. They said they hope the strike changes budgets to recognize the increased responsibilities schools have been asked to take on: raising and caring for the whole person.

Another common theme from the neighborhood’s responses to the strike has been to acknowledge privilege. Many parents and students know that not every SPPS family has the means to manage the significant changes of schedules and meals this week. Parents constantly mentioned feeling ‘lucky’ to have both flexible working situations and support networks of friends and family. But, as Carlson noted, “Many families do not have it as easy as we have it.”

Jude Breen, a Como Park 10th grader, feels torn about the strike. “I really believe in the things the teachers are striking for. But I also can’t help but think of the students that are stuck at home with no food, and possibly an abusive home environment.”

Similarly, Murray eighth grader Phoebe Finlay said, “A lot of students won’t have access to breakfast or lunch because of the strike and younger kids might not have people to take care of them while parents are at work. I hope they come to an agreement as soon as possible.”

During the strike, the school district will offer 24 community meal sites, serving breakfast and lunch daily. And beginning March 12, seven Kid Space locations are being set up throughout the city. The School District’s website describes Kid Space locations as “safe, warm locations for students (grades K-5) to spend time, with enjoyable activities and adult supervision.” These sites will be open from 8:30 a.m. to 3 p.m. and includes breakfast and lunch each day.