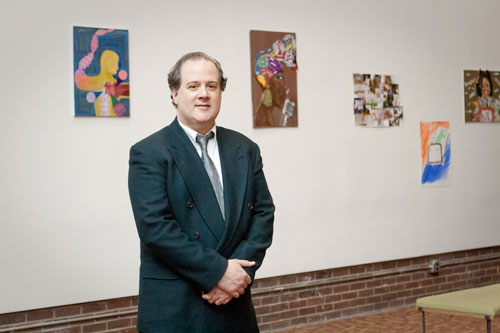 Bringing art into the health sciences

Nicola Demonte was a recent college graduate when he first saw the benefits of art therapy in a medical setting.

He had just finished his bachelor’s degree in clinical psychology and joined the staff at a Chicago psychiatric hospital, where he shadowed a social worker who had initiated an art therapy group. Most of the patients at that hospital were suffering from chronic mental illness, Demonte said.

“It was the last stop before the state hospital—very chronic cases. It was the most extreme kind of environment one could imagine going into after college.”

More than 18 years later, Demonte has made art therapy his life’s work. And in January, the St. Anthony Park resident helped launch the Arts in Health course at Hamline University.

The class is offered through the Department of Studio Arts and Art History in collaboration with the university’s Public Health Sciences program. The course was so popular the school is offering it again this summer.

Demonte, who has a master’s degree in clinical psychology and has studied the history of art and architecture at Harvard University, shares his expertise around the metro area. He teaches art classes to Alzheimer’s patients at the Minnetonka Center for the Arts and at a senior facility in Chanhassen and he’s on the faculty list at the Bloomington Theatre and Art Center.

The Hamline class is another educational outlet for Demonte. “It’s a hybrid course” that introduces students to the history of art and medicine and artistic processes such as drawing, painting and collage, Demonte said. Students in the class come from a variety of majors.

Nuuria Osman, a sophomore, was a studio arts major who is now planning to major in both studio arts and public health. “I’m trying to become an art therapist,” she said. She initially had thought she’d be an art teacher “but figured that wouldn’t work very well. There are not a lot of jobs in elementary school art.”

She did some research and “landed on art therapy.” It was serendipity that Demonte offered the Arts in Health class this year.

“This is the first time they had it,” Osman said. “I was really excited, especially to take it at the beginning of my sophomore year.”

The class began as a month-long intensive J-term class, and then students participated in 120-hour internships at hospitals and care facilities in the metro area. Osman worked at the St. Paul campus of Children’s Hospitals, working at bedside with children.

“We are there as another support system to help relieve stress by doing different art techniques [with the patients],” she said. “My first day I had a girl who was recovering from neurosurgery,” Osman said. “She was very quiet and unresponsive, and the nurses had told me her parents weren’t going to be there all day. She was around 6 years old. She wouldn’t really talk to me, didn’t want to do anything, was slow with her movements and speech. I [spent] about three or four hours with her, and by the end of the time, she was talking up a storm with me and having fun.”

The course examines integrating arts programs across the lifespan, Demonte said. Kate Monson, a junior in public health sciences, saw that firsthand while interning at Children’s and Shriner’s hospitals and at Lyngblomsten, a senior care facility in Como Park. At Lyngblomsten, Monson’s first task was to help out in a taiko drumming class. The taiko drumming, she learned, is more than just a full-body workout.

“Everyone who is in there, when they start to drum, their faces light up. It’s a fun activity for them to do and really good physically for them,” but it’s also good brainwork as participants memorize words that correspond with each hit of the drum, Monson said. “They are speaking and playing at the same time. It’s a mental workout.”

The Arts in Health class has “opened my eyes to a new field,” Monson said. “I have always been interested in alternative health methods. I also really like art. It’s a good blend of the two things.”

Studies have shown that there are benefits to art therapy, Demonte said. “It lowers blood pressure, the heart rate, it has impact on language, mood, depression. More and more medical fields are seeing it as an important aspect in medical education.”

Demonte—who has worked with Holocaust survivors, patients suffering from eating disorders and dementia patients—has seen the benefits in his own work. “There are so many different stories,” he said. One happened recently. A woman with dementia whom Demonte had been working with began talking for the first time in a year. The woman’s son could now understand what she wanted.

“You see such great outcomes with people,” Demonte said. “Creativity has the potential to heal.”