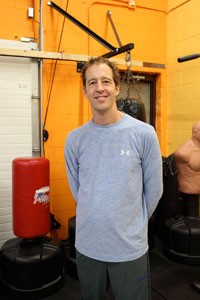 In a nondescript warehouse off University Avenue, John Ingwalson is rebuilding bodies, and building a community, one exhilarating work out at a time.

A lifelong athlete and black belt in Tae Kwon Do, Ingwalson wanted to create a career out of his passion for personal fitness and opened John’s Total Body Conditioning.

“It wasn’t just about creating a business but also a community of like-minded people who have a desire for fitness in common,” said the St. Anthony Park resident. “I started asking around and people were more interested in an organized class than in personal training.”

While Ingwalson has no formal training, he pulls from his various fitness experiences such as his practice at the Kuk Sool Won school in St. Paul, where he also holds the rank of Black Belt. Kuk Sool Won, a Korean martial art, explores the entire spectrum of established martial arts, body conditioning techniques and mental development.

“It is this comprehensive, whole-body philosophy that my classes encompass,” he said. “I try to incorporate drills and exercises from all kinds of sports from running to football to martial arts and more.”

The 45-minute workouts are designed so beginners can easily work at their own level while students at a higher level of fitness feel challenged.

“We are constantly challenging our bodies in new ways. We do something in the beginning for strength conditioning using body weights or medicine balls, then move to cardio, kickboxing and multidiscipline training, ending on most days with a three-minute intense, ‘tabata’ like, exercise,” he explained.

In April 2011, toward the end of his first year running the class, Ingwalson broke his neck during a martial arts practice session. He had always envisioned handing off the class to advanced students eventually, but now he didn’t have a choice. “Handing off the class was a part of the idea of creating a community, but it came to fruition sooner than expected. After I broke my neck I had to hand it off, and it continued to thrive,” he said. He wore a neck brace for three months, and then started the slow journey back to his original fitness level. Student Dana James, as well as other Kuk Sool students, ran the class in the meantime. By the following winter, Ingwalson was able to work on regaining his strength. “I attribute my relatively quick recovery to the level of fitness I was at before the accident,” he said. His role in the class changed to that of coach rather than participating fully in the exercises. “Through the journey to recovery from a serious accident, I got present to what it’s like to start from a beginning level of fitness,” he said. “This allowed me to focus on helping individual students on their own level.” Because Ingwalson is a stay-at-home dad, classes only run during the school year. On days off from school, kids are welcome and even get their own obstacle course at the end of the adult class. Classes run Monday, Wednesday and Friday from 9:15 a.m. to 10 a.m. The first two workouts are free to ensure the class is a good fit. A punch card can be purchased for $25 for five workouts and do not expire. Ingwalson’s studio is located at 830 Transfer Road, Warehouse 2. Call 651-263-3183 for more information.