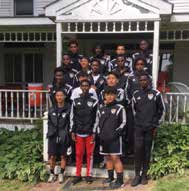 When I coached the Como boys’ soccer team several years ago, I searched for team-bonding experiences that would extend beyond the soccer field.

Andrew Kingsriter was one of my captains in 2006, and Nate Kingsriter was a captain in 2007. Their parents, Elaine Allen and Bryan Kingsriter, own a farmhouse on the Root River Trail in Preston, Minn., two hours southeast of their St. Paul home.

Hoping their generosity and support of the team would influence their answer, I asked Elaine and Bryan if they might be willing to let us do an overnight camp­out at the farmhouse.

Not every adult couple would agree to feed, lodge and tolerate 20 energetic high school boys on their peaceful property, but for Elaine and Bryan, the answer was “yes!”

Now, more than a decade since their sons played Como soccer, the answer is still “yes.” And camping at the farmhouse is still an unforgettable experience for every one of the approximately 125 boys who have been blessed to be there with Cougar teammates.

In 2007, I scheduled a game for our team against Stewartville (relatively near the farmhouse) at noon on a Saturday in late August. We took a chartered bus downstate in the morning, played the game, then bussed to the farmhouse, pitched tents, played bocce ball, explored the surroundings, ate dinner, had a campfire with s’mores, laughed a lot, and eventually settled into sleeping.

The next morning, we took a fun run to the top of a bluff, followed by a big breakfast on the porch, breaking down tents and cleaning up before boarding the bus back to St. Paul.

Steve Mantell was a senior captain in 2009 for a talented team that would go on to become the St. Paul City Champions.

“Camping together allowed guys who were normally quiet and serious to open up, laugh, and make jokes,” Mantell said. “Having developed that level of comfort allowed us to better understand each other which translated into strong performances as a team on the field.”

In 2010, we started playing Austin on the farmhouse weekend because they were the best competition in that section of the state. Como vs. Austin has become an annual game between two programs that frequently qualify for the state tournament and whose participants have great respect for each other.

Hsa D Moo was part of the first Como team to play Austin. He recalled winning that game in his freshmen year, and again as a senior in 2013 during the state championship season. It served as a springboard for success.

More than that, Hsa D Moo expressed an appreciation for the time together in a new setting.

“It was my first ever camping experience in America,” he said. “It helped me and my team by getting closer to each other as a family. It made us connected and welcomed as a refugee kid.”

As for this year’s team, coach Jonah Fields was eager to prepare his boys for the experience. After acquiring tents from generous neighbors, they practiced setting them up on the Como grass field with their intentionally mixed grade and multicultural groupings.

Senior Abdulaziz Ahmed played a huge role for the Cougars in this year’s dramatic 2-1 comeback victory over Austin, assisting the game-winning goal with 45 seconds left. He smiled and expressed gratitude when discussing the weekend.

“We had fun,” Aziz said. “We didn’t have phones, so it was really nice to be connected and come together as a team. And Bryan and Elaine were really nice and we appreciated that.”

On a team predominately composed of immigrants from East Africa and Southeast Asia, junior Kevin Iragaba discussed how those groups came together at the farmhouse.

“I was looking for if we could have more than one race staying with one race,” he said. “I just saw something different [at the farmhouse].

“Everyone was together. It was the best thing and the most fun we have had with soccer at Como.”

For the hosts, giving back to the program their sons played for is a labor of love. “I still feel this attachment to Como and soccer is a fun way for us to stay connected,” Elaine said.

“I think it’s a way, too, that the farmhouse has a bigger meaning than just being our vacation home,” Bryan added. “It gives the farmhouse more of a purpose to help kids have an experience they may not have otherwise.”

As coaches, having community support and the gift of a resource such as the farmhouse is a blessing. Coach Fields and assistant Sunday Htoo know they will be able to draw upon this year’s camping experience going forward.

“I think the shared experience from the game and campout are critical for developing the bond and team identity,” Fields said. “I think that resilience and result from the game and time spent together off the field create a sense of trust and unity that will be helpful in the challenging matches this season.”