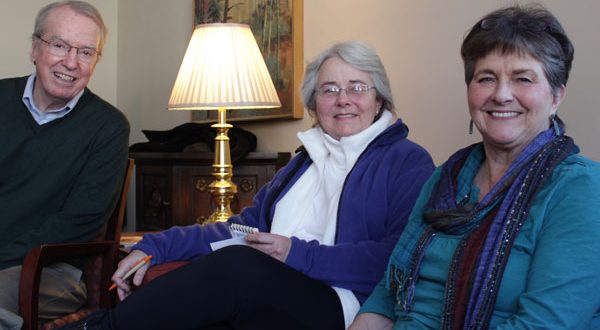 Care for the caregivers

One man’s wife was diagnosed with Alzheimer’s six years ago and is now living at a nearby nursing home. He couldn’t be with her on Christmas Day in December because he was suffering from a bad cold, he says. “She didn’t remember, but it was a big deal for me.”

A woman’s husband suffered a stroke nine years ago and was diagnosed with cancer four years after that. “I’m just trying to cope,” she says.

Another man describes a friend whose health is in serious decline and a family member dealing with cancer. He asks how he can be a good caretaker when he’s “overwhelmed emotionally.”

One by one, the circle of men and women who showed up to the monthly Caregiver Support Group at St. Anthony Park United Church of Christ (SAP UCC) on a bitterly cold morning in January, describe why they are there: Each is taking care of a loved one suffering from a debilitating illness. Each of these caregivers could use a little care themselves.

“Part of support is simply to be here together,” explains Ted Bowman, an educator, author and trainer, who has helped facilitate the group since it began 10 years ago. “We share information of what has worked for us, resources we have found. We aren’t here to fix or advise or rescue. We are here to aid participants in gaining support and confidence for decisions they face.”

The group meets in tandem with the Bereavement Support Group the first Thursday of each month at 10 a.m. at the church, located at 2129 Commonwealth Ave. in St. Anthony Park. The caregivers’ group began after Pastor Victoria Wilgocki came to the church in 2008. She saw a need for the group and asked Bowman to co-lead a group for members of the church. Word quickly spread to neighbors, and as members of the caregiver group experienced the loss of their loved ones, a new group was formed to support the bereaved. Wilgocki and SAP UCC member Marilyn Benson lead that group, while Bowman, Pam Dragseth and Mary Hayes co-facilitate the caregiver group.

And steadily, the word has spread and Bowman often sees people from Lauderdale, Roseville, the Como and Hamline areas, and even Minneapolis attend.

A man from Roseville came for the first time in January, after he heard Bowman’s talk “The Ongoing Losses of Living with Dementia” in December at Roseville Library. The 87-year-old’s wife was diagnosed with Alzheimer’s four years ago. He’s looking to move them out of their family home and was curious about others’ experiences moving into an assisted-living situation.

“The support comes from the collective of being in a safe, nurturing space with other caregivers,” Bowman says. “It also comes from personal support for challenges or joys that members share. Members help each other by sharing things they are doing, perspectives they have and decisions they have made.” Resources are shared and sometimes guest speakers come to talk about specific matters such as dementia, Parkinson’s or how to ask for help.

As the group comes to a close, Bowman asks the caregivers what they are doing to take care of themselves.

“I go for a walk,” says a woman, who has kept quiet through most of the meeting. “It’s the best thing I can do.”

Daily journal writing, daily scripture reading, meditation, swimming, Samuel Barber’s Adagio for Strings. One man tries to see the sunrise several times a week and often drives to a park in Roseville to do that.

Despite the fatigue and isolation that being a caregiver can bring, members do find some levity and positive moments to share: like a canceled trip to the East Coast that week due to a spouse’s health decline. Ends up, the caregiver had dodged the mammoth winter storm that hit the eastern seaboard that very day.

The Caregiver and Bereavement Support Groups meet the first Thursday of the month from 10 to 11:30 a.m. at St. Anthony Park United Church of Christ. To learn more, call 651-646-7173 or go to www.sapucc.org.

The following is a list of recommendations for caregivers or others who are feeling stretched, compiled by Ted Bowman from a variety of sources.

Seek recognition (spend time with friends and professionals who give you feedback).

Talk about it; be heard.

Make informed decisions with the best information that you have at that time, and then don’t second guess yourself.

Say no to some things so that you can say yes to others.

Maintain the value-based reasons for what you do.

Challenge your negative beliefs and assumptions.

Plan ahead, including advanced directives of all kinds.