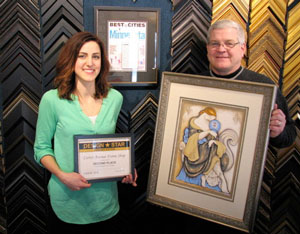 Amanda Wellner with her second-place framing award and Steve
Hoien of Larson-Juhl.

Larson-Juhl is the leading picture-framing industry supplier and a Berkshire-Hathaway company. Hundreds of custom frame designs were submitted to the competition. The awards were presented at the world’s largest picture framing industry event, West Coast Art & Frame, in Las Vegas.

Wellner won second place for her framing of a Rajka Kupesic serigraph titled “Woman with Fan.” Her design featured an ornate antique silver frame with fabric mats and double fillets.

Carter Ave. Frame Shop was established in 1975. Smith has owned it since 1985. You can learn more about the shop at www.carteravenueframeshop.com.