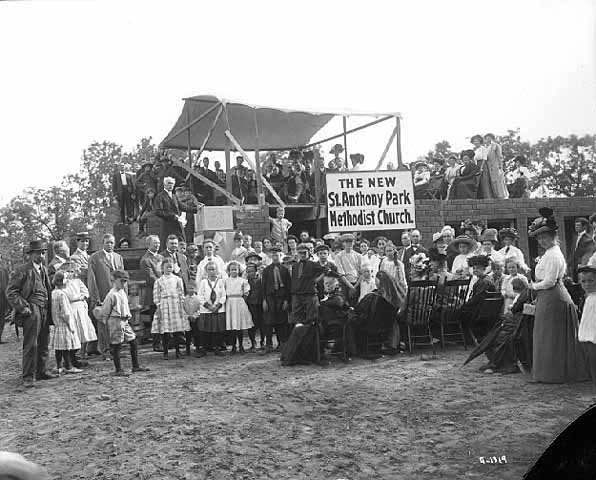 The congregation from St. Anthony Park United Methodist Church lays the cornerstone for the new church at 2200 Hillside Ave. in 1911. (Minnesota Historical Society)

That’s probably a bit of an exaggeration, but not much. The church, which is celebrating its 125th anniversary this year, has been home to, or hosted, community groups that span all ages from infants to senior citizens.

The church began on June 8, 1889, when six people met for a prayer service at Norris Hall, which was located at 950 Raymond Ave. in St. Anthony Park. The rapidly growing group was formally recognized as a church in October that year. The first building the church owned (969 Raymond Ave.) was occupied from 1891 until it proved too small for the growing congregation.

A new church was constructed at its present site, 2200 Hillside Ave., in 1911. In 1923 the congregation had 400 members and needed still more space, so an addition was built.

One of the most influential early pastors was the Rev. Lloyd H. Rising, who served from 1923 to 1940, according to church records. Many of the early church organizations were formed under his watch. In the late 1940s, the congregation once more was growing out of its building. This spurred both a remodel that lengthened the sanctuary and the addition of a narthex, space for the church school, offices and a new chapel.

In 1953, many long-standing members of the congregation left to join the newly formed Centennial Methodist Church in Roseville. Membership began to decline as people moved to the suburbs or joined the Roseville church. In 1993, a designer was brought in to study the building and recommend a way to keep the church’s spirit intact with a smaller congregation.

The sanctuary was remodeled to become more intimate and friendly, and the church reached out to the greater community, actively recruiting members from the University of Minnesota and other institutions in the neighborhood. In addition to groups within the congregation, such as the Ladies’ Aid Society and other women’s guilds, the Methodist Men’s Forum, Senior High School League, Youth Club and the Sunday school, the church hosted Boy Scout Troop 22 (until it disbanded in 1967), weekday church school and a drama guild. Like many other churches in the neighborhood, it had a dining hall at the Minnesota State Fair for many years.

The church hosted a dining hall at the Minnesota State Fair for many years. (Minnesota Historical Society)

The church’s history of “radical hospitality” continues today. The SAPUMC Nursery School, established in 1958, still serves the neighborhood (and is expanding staff and hours next fall), as does the Leisure Center, which meets at noon on Wednesdays. A highlight of the week for many seniors, the Leisure Center has offered lunch, field trips, socialization, entertainment and activities such as card games, sewing, crafts and painting.

Smaller congregations have shared the space over the years, and the church is currently home to Greater Grace, a Liberian church that uses the building for noon services on Sundays and for Bible studies.

Congregants serve meals at Simpson Shelter in Minneapolis three or four times a year and help staff Project Home, which provides emergency shelter for homeless families, when it is in the neighborhood. They also send grief baskets to St. Joseph’s Hospital for families that have lost a baby, collect school items for the St. Paul Area Council of Churches, and support Imagine No Malaria and United Methodist Committee on Relief, which provides emergency aid globally to people who have experienced a disaster in their homeland.

Church member Betty Gumbrell said the current atmosphere in the church is one of energy and hope. “The increased use of the building space delights us, and there has been a steady growth in the number of young families and children,” she said.

The church has been celebrating its anniversary with a different emphasis each month—banners one month, pictures another—all under the slogan “125 Years of Faith, Fellowship and Service.” On Pentecost Sunday in the spring, members walked from the site of that first meeting in south St. Anthony Park to the Hillside church and followed the service with a picnic lunch.

On Sunday, Oct. 12, the church will host a celebratory service with former pastor Greg Renstrom preaching. The service will be followed by a “family reunion” with current and former members with a soup lunch made from a recipe used by former member Evelyn Harne and cooked by longtime member

Mary Markgraf. The Rev. Melanie Homan will be sending invitations to all former members as well as current ones. The yearlong celebration will end on Sunday, Dec. 14, with Bishop Bruce Ough preaching at the service. Sunday services are at 10 a.m. year- round, and all are welcome.

St. Anthony Park United Methodist has seen many changes over the years, but it is still vital and still growing.