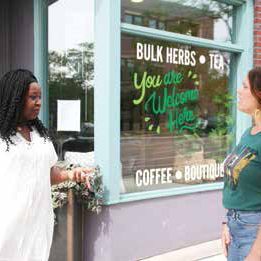 After George Floyd was killed, Samantha Huett-Shvetzoff watched protesters spill into the streets. She saw the pain and the passion and wanted to be a force for positive change.

“It all sparked this fire inside of me,” Huett-Shvetzoff, a St. Anthony Park business owner, said. “It’s a fire I didn’t know I had honestly.”

Huett-Shvetzoff, who opened Healing Elements on Como Avenue in 2016, realized her yoga studio gave her a platform from which to speak about racial injustice.

“In Saint Anthony Park it seems we were in this safe little pocket, or nest,” she said. “The majority of our clientele are white and seem to live for the most part with privilege and with access to resources. And now we’ve really had our eyes opened to the lack of access affecting so many of our neighbors. I was like—how can we reach out to the greater community?”

Huett-Shvetzoff started by organizing a food drive and raised $1,800 for organizations working in neighborhoods hit by arson fires. Now she is considering next steps.

Saint Anthony Park and immediately adjacent neighborhoods in St. Paul weren’t at the center of protests and didn’t see businesses burn in late May. But residents, organizations and business owners have seen racial inequality in new ways and many have grappled with how to turn their dismay into action.

Hampden Park Co-op has invited customers to “round up” their grocery bills in July and plans to give these donations to George Floyd’s family. Urban Growler is brewing a “Black Is Beautiful” beer to raise funds for a local organization working for racial justice and equity, joining a national effort started by a black-owned brewery in Texas.

In response to the widespread rioting, looting and vandalism in the Twin Cities in late May, District 10 Community Council board and community members responded to sudden needs in various ways. Those actions included banding together to protect the home and safety of a District 10 family who received vulgar, violent, race-based threats and donated enough supplies for 150 activity kits for children in north Minneapolis.

The neighborhood discussion group—SAPark@groups.io—saw lively posts about whether Buford Avenue was named after a Confederate general and slave owner and, if so, whether to change the street name. Local institutions such as Sunrise Banks and the St. Anthony Park District 12 Community Council have issued statements condemning Floyd’s killing and pledging themselves to work against racism.

Meanwhile, many people are still reflecting on possible long-term responses.

“I think as a community people are still in the reaction mode,” said Kathryn Murray, District 12 executive director. “There is education that needs to happen and healing that needs to take place. I don’t know what that means yet for St. Anthony Park.”

Immediately after Floyd’s death, some neighborhood residents joined the protests against yet another killing of an unarmed black man by a white police officer. They also pitched in to help neighborhoods affected by fires.

“What was impressive to me was going down to Midway that Friday morning and seeing thousands of people cleaning up,” said Steve Ray, who lives on University Avenue. Ray joined a crowd at Bethlehem Lutheran Church after the fiery night in St. Paul. “There was this outpouring of community support.”

Huett-Shvetzoff also responded after seeing a plea for food donations on Facebook. Healing Elements gathered money and supplies from friends and clients and brought more than 90 bags to community organization Centro de Trabajadores Unidos en Lucha, a few doors down from Cup Foods in Minneapolis where Floyd was killed.

“It was people from all backgrounds coming together,’’ said Huett-Shvetzoff.

“It made me feel like I was doing something concrete,” Walker said, even as she acknowledged that rushing to address basic needs in the immediate aftermath of the protests won’t change the inequalities that led to them.

“I’m afraid that most people are going to treat it like a natural disaster,” said Sherman Eagles, a Medtronic retiree and north Saint Anthony Park resident. “They’re going to come in and have an immediate response to help people. Then they’ll feel good about having helped and six months from now they won’t be doing anything.”

Eagles and his wife have pledged new, ongoing financial donations to a couple of community organizations working in the Midway and in north Minneapolis. He believes broad change will only happen when underlying economic inequality is addressed.

“How do we support building more wealth in neighborhoods that don’t have any, and don’t have any because of policies and actions the have been taken for years?” Eagles asked.

Eagles is working with a group to create a real estate investment cooperative in the Midway to keep rent affordable for small local businesses, including black-owned businesses. The idea for a real estate co-op preceded Floyd’s death, but it’s gained momentum as people look for new ways to support low income neighborhoods and entrepreneurs of color.

Johnston, for example, said before Floyd she might not have seriously considered scrapping the traditional police department for something else. Now instead of being “dismissive and pessimistic” about defunding police, she and her 20-something friends are embracing the idea.

“I’m entering into conversations and finding out that there really are other options,” Johnston said. “If more people wrapped their heads around it we could have a future where the city doesn’t spend most of its budget on the police and instead spends more on mental health counselors and social workers and other people who might respond to crisis in a way that helps everyone. It now seems very realistic.”

Long-term effects from the protests have yet to be seen, but many people said that Floyd’s killing marks a turning point, coming as it has on the heels of COVID-19 that had already caused disproportionate suffering in low-income communities of color.

“It seems to be the straw that broke the camel’s back in many ways,” said Scott Simmons, a Lutheran (ELCA) pastor who chairs of District Council 12’s equity committee. “This has heightened our awareness that something is moving and we need to pay attention.”

Simmons says he has invited more than a dozen leaders from congregations and religious organizations in the broad Saint Anthony Park neighborhood to gather on ongoing Zoom calls to talk about possible next steps.

“What I’m intending is not just one conversation or event, but an ongoing practice to stay open to what’s emerging out there,” Simmons said. “How do we create that environment where people who have voices that aren’t being heard are held up and the rest of us can step back with humility and listen?”

The equity committee has facilitated several new efforts in recent years, including weekly donations of fresh summer produce from the Saint Anthony Park Community Garden to the nearby Seal Hi-Rise public housing apartments. Simmons says he hopes it can do more.

As Huett-Shvetzoff reopens Healing Elements, she says she also is looking for meaningful next steps. In the last weeks, she’s immersed herself in learning more about the history of racism—listening to podcasts, reading articles and having conversations with new people. She wants to see her business expand its mission to apply itself to healing racial injustice.

“I’d like to welcome in some new practitioners who could help facilitate this greater educational and awareness piece around racism and social justice,” she said.

One person Huett-Shvetzoff has been talking to is Rosie Blanc, a Haitian-American life coach who lives less than a mile away on Como Avenue.

Until this spring, Blanc worked at Lutheran Social Services supporting pregnant teens and youth experiencing homelessness, work that directly addressed the mental health and economic wounds of long-term racism and poverty. She left to start her own business, Transformative Rose, which uses deep breathing and meditation to help clients work through trauma. Blanc had taken classes at Healing Elements and now she and Huett-Shvetzoff are exploring a staff training and a possible community conversation around racism.

Blanc, who came to St. Paul from Haiti with her family when she was 4 years old, was hit hard by Floyd’s killing. She couldn’t bring herself to watch the entire video of his death.

“As a black woman, it’s hard for me to look at black men being killed,” she said. In the past, she has scrolled past stories about police killings “because it hurt so much. I didn’t know if I could walk around and stay sane after watching it. It can awaken that sense of justice—this is wrong—and that can lead to action. Or, it can just shut you down.”

This time, Blanc’s pain is leading to action. “Our community is going to need a lot of healing after this,” she said. She said people outside black communities seem largely unaware of discrimination and racism. “There is a choice that’s made to not look and not see,” she said. “Why is that?”

Blanc’s hope is that in the weeks ahead she can help facilitate the personal transformations that can plant seeds for bigger social change.

Maja Beckstrom is a journalist/writer who lives in St. Anthony Park.