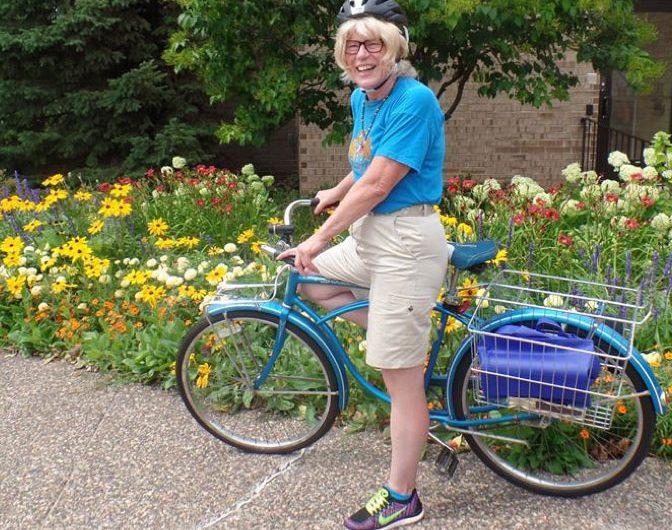 This is one of a series of occasional columns from Transition Town – All St. Anthony Park, the neighborhood-based group working for a local response to climate change. You can find out more about Transition Town at www.TransitionASAP.org.

St. Anthony Park is home to dozens of nonprofits that share one or both parts of Transition Town – ASAP’s goal: “smaller footprint, stronger community.” One group that shares both is Move Minnesota, the newly renamed merger of Transit for Livable Communities and St. Paul Smart Trips, two nonprofits with a 20-year history of advocating for a variety of transit options.

At its June 4 launch at Dual Citizen Brewing, 725 Raymond Ave., Move Minnesota’s executive director Jessica Treat announced the name and its “new mission: to lead the movement for an equitable transportation system in Minnesota that puts people first.” The goal is “to expand transit, walking, rolling, biking and shared options, because that’s what it will take to break down decades of a cars-only culture,” she said. “[W]e’re changing hearts, minds and habits.”

Drop a car? It might be easier than you think

Thanks in part to that advocacy, our metro area is—by national standards—both bike-friendly and well-linked by public transit. As some of us see it, cars are becoming redundant. In May, Pat Thompson co-led a Minneapolis Community Ed “Drop a Car” class. A St. Anthony Park Community Council member and Transition Town leader, Thompson taught the session with Leslie Mackenzie of Transition Longfellow in Minneapolis and a representative of Hour Car, which offers short-term car rentals. 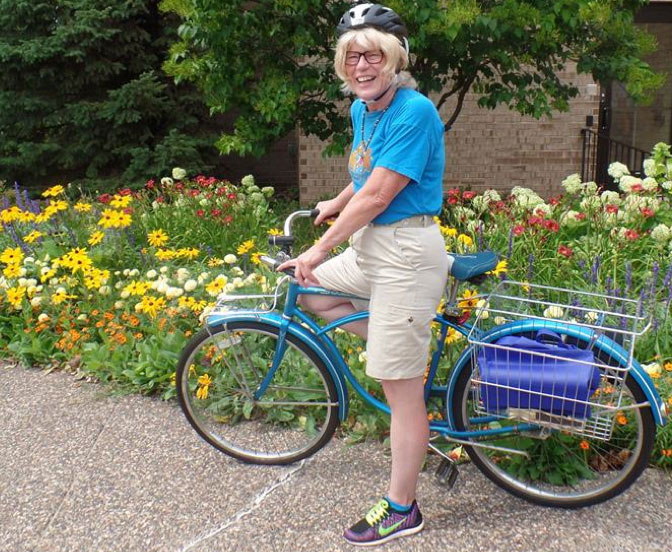 “Once you learn a bit more about Metro Transit, dropping a car seems more doable,” said Thompson. “It’s a big money saver, and the Transit Assistance Program offers reduced fares if you qualify.

“It’s convenient, especially with a GoTo card and a smart phone, which shows instantly when the next bus is due at any stop,” she said. “People are finding that their household can manage with just one car, or sharing a car with a neighbor, or even going car-free.”

Some St. Anthony Park residents are already setting that trend. When Grant and Elaine Abbott sold their second car five years ago, “it took a little getting used to,” said Grant. “But today, with our GoTo passes, we are seasoned users of Metro Transit. Bus access is easy in north St. Anthony Park, where we live. Want to visit downtown Minneapolis or St. Paul? Hop on the No. 3 bus. Want to get to Rosedale, the Green Line or Highland? Take the 87. Need to go north or south on Snelling? Grab the 84 or the A Line Express at Como and Snelling. From these three routes, you can connect to nearly all the others in the network.”

“Here’s our suggestion for two-car households,” he added. “Park your second car for a couple of weeks and try Metro Transit. I think you’ll be surprised how well it works.”

Another neighbor, Betty Lotterman, took it a step further. Since she went car-free in 2015, Lotterman has often been seen on the bus, light rail or her sturdy vintage Schwinn (with baskets for shopping trips). “I began to live locally in ways I hadn’t thought of before,” she said. “I’m figuring out which of my needs and wants I can meet within walking or biking distance of my home. I spend less time trying to ‘get there’ and more time enjoying my own neighborhood.” 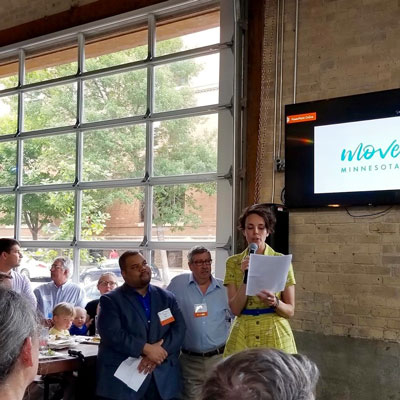 Jessica Treat announces the new name, Move Minnesota, which is a result of the merger of Transit for Livable Communities and St. Paul Smart Trips. Photo by Catherine Reid Day

Mindy Keskinen
Mindy Keskinen brings her editorial background to a project she shares with Pat Thompson: coordinating the Park Bugle's column from the local group Transition Town – All St. Anthony Park. The column features a variety of local voices on climate and resiliency topics. Working toward a "smaller footprint, stronger community" since 2013, TT-ASAP finds neighborhood-based ways to take action on climate change: learn more at TransitionASAP.org and drop in on a monthly meeting. Open to all, the group is part of a larger movement of municipalities transitioning from fossil-fuel-based ways of life to more eco-friendly, equitable practices. To browse their past columns by topic, visit TransitionASAP.org/park-bugle-columns. They welcome your ideas: reach Mindy at communications@transitionasap.org or Pat at transportation@transitionasap.org.