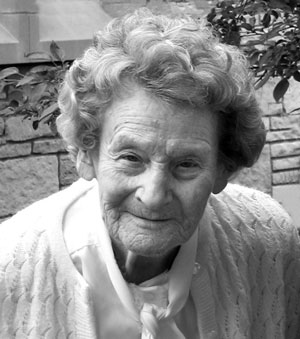 She was the devoted wife of Henry Hansen for 64 years and creatively raised three boys. She enjoyed spending summers at Itasca State Park and Leech Lake, attending high school and Gopher hockey games and other University of Minnesota activities, shopping for bargains, socializing with friends, playing 500 and talking on the phone.

Charlotte was born to Harry and Selma Lindquist on Feb. 27, 1915, in Minneapolis, the second of five children. She grew up in the Camden neighborhood of Minneapolis, grew in faith at Gethsemane Lutheran Church, graduated from North High School and received her teaching degree from St. Cloud Teacher’s College in 1936.

She married Henry Hansen of St. Cloud in 1941. Henry preceded Charlotte in death in 2005.

She was also preceded by her son Trygg Hansen; brothers, Rodger and Earle Lindquist; and sister, Ruth Lakey.

A memorial service was held April 12 at St. Anthony Park Lutheran Church. After the service, the famous Lindquist Christmas sausage sold at Christmastime by Speedy Market was enjoyed by attendees.