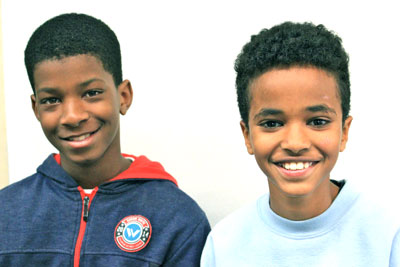 Daniel Walker (left) and Sam Medhane, fifth-graders in Susan Fredrickson’s class at St. Anthony Park Elementary School, are the school’s chess champs. Walker and Medhane finished at a stalemate in a chess tournament in May and both were declared champions. The boys had been meeting in an after-school chess class for several months. Medhane and Walker say they both learned chess at home, Medhane from his dad and Walker from his mom. Walker says he likes chess because “it’s like a sport” in strategizing where players should move. Both students say they plan to keep playing when they move on to middle school in the fall.