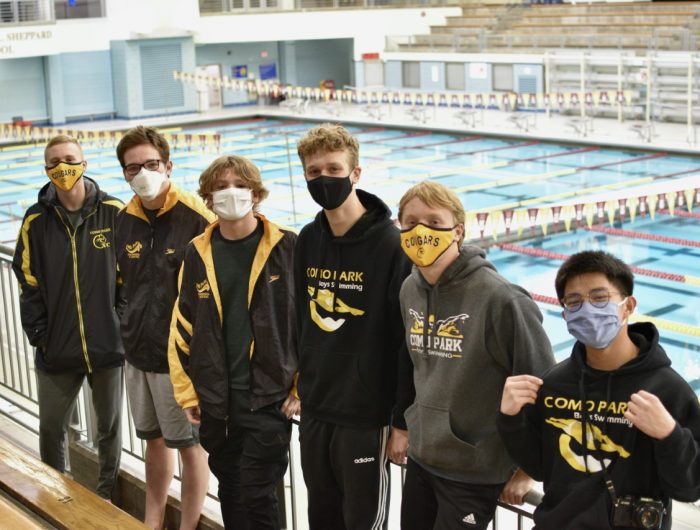 Chronicling Cougars winter sports and a peek at spring slate

In a year of amended athletic schedules amid a global pandemic, winter sports at Como Park High School finished later than usual.

Student athletes being able to have fun and complete their winter seasons without COVID-19 shutdowns were positive achievements in their own rights.

Here’s a rundown of the highlights, plus a brief preview of spring sports that began in April.

For the seventh consecutive year, Como captured the St. Paul City Conference Championship. With another undefeated record in conference play, the Cougars’ winning streak in the city reached 72 games.

Junior guard Ronnie Porter was an All-State selection and one of five finalists for the East Metro Player of the Year, while also winning Player of the Year in the conference. Other Cougars earning All-Conference were juniors Kaylynn Asberry, Cloey Dmytruk,and Jada James.

The team advanced to the Section 3AAAChampionship game where the season ended in a heartbreaking 68-66 overtime loss to St. Croix Lutheran.

The lone defeat left the team with a 12-1 overall record. Off the court, the Cougars boast a weighted team grade point average of 4.1 and outstanding academic work, which were featured in last month’s Bugle.

With less depth than previous seasons, the Como wrestling team didn’t win as many dual meets this year, finishing fifth out of seven schools in the conference standings.

Still, several individuals consistently won matches in their weight classes and improved during the season, enabling them to compete with top competition in the Section 4AA Tournament.

The Cougars took a significant step forward in the St. Paul City Conference this season, defeating the Highland Park/SPA team in both of their dual meets. That hadn’t happened since the 1990s, and it propelled Como to a second-­place conference finish.

With energy, passion and a disciplined training schedule, the Cougars prepared for the Section 4A Meet with goals of posting personal best swim times. The team placed third out of 10 teams in the section, trailing only St. Thomas Academy and St. Anthony Village.

Personal records were indeed achieved. And with those times, five Como individuals qualified for the state meet at the U of M Aquatic Center—where every Minnesota high school swimmer dreams of concluding their season.

As one of three St. Paul public schools with a Nordic ski team, Como once again competed in the Twin Cities Nordic Conference. The Cougar boys finished fifth and the girls finished sixth out of 10 schools.

Getting outside and skiing at Como Golf Course almost every day was a positive routine that enabled the dedicated athletes to be active with friends in a safe environment.

A year ago, athletics across the state were shut down at the onset of the COVID-19 pandemic. Most spring sports were in their first week of practice when the world paused, and the season never resumed.

Thus there haven’t been any spring high school athletic results since 2019. That started to change in mid-April when competition commenced. The Como Park Cougars are fielding teams in baseball, softball, badminton, track and field, golf and boys tennis.

Students and coaches are excited to be back in action. Masks have become part of the normal equipment for all participants. Social distancing is still a point of emphasis. Regardless of restrictions and protocols, there is positive energy in all activities and gratitude and hope in the spring air.