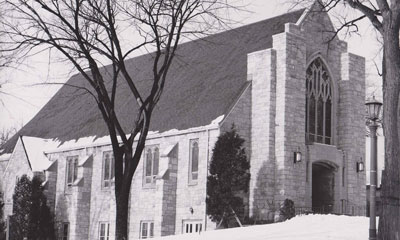 The church began worshipping on Cleveland Avenue in 1941.

The Church of Corpus Christi marks its 75th year in 2014. The congregation began celebrating this anniversary on Monday, Jan. 27, with a weeklong “renewal of faith and spirit.”

Each night, after a light supper at 6 p.m., two Redemptionist priests from Chicago—Father Tony Judge and Father Greg Schmitt—will present and lead discussions on different topics, beginning at 7 p.m.

The Wednesday, Jan. 29, theme is the Easter candle and the Thursday, Jan. 30, topic is the altar. The dinners are free, but reservations are requested for planning purposes. (Call the church at 651-639-8888 for all reservations.) A children’s program will be held during the talks. Let the church know how many children you plan to bring.

On Friday, Jan. 31, the church will hold a parish dance starting at 6:30 p.m.; snacks will be served. Following the 5 p.m. Mass on Saturday, Feb. 1, there will be a free spaghetti dinner, but reservations are limited.

The week culminates on Sunday, Feb. 2, with a hospitality hour after the 9 a.m. and 6 p.m. Masses. All former priests, parishioners and students from the school are encouraged to attend all activities.

The 75th anniversary celebration will continue on Saturday, June 21, with a parish picnic and all-school reunion after the 5 p.m. Mass (rain or shine). The cross that was removed from the old Cleveland Avenue church will be dedicated and placed in a permanent location on the church grounds on June 21.

It all began in a basement

The church first met at Fireside Hall in the lower level of what is now Milton Square.

To many, a church is a brick-and-mortar structure, but those who belong to a church know that it is not the building but the people who gather within it to worship and support one another who are the real church. Though it has been housed in four locations, the Church of Corpus Christi has remained a thriving, active parish for 75 years.

Corpus Christi had its beginnings as the “Confraternity Christian Doctrine Group,” which was comprised of mostly University of Minnesota students who met at the Agricultural Engineering Building on the St. Paul campus under the guidance of Father Rudolf Bandas. When the Minnesota state fairgrounds were chosen as the site of the 1941 National Eucharistic Congress, Archbishop Gregory Murray (who had been considering establishing a parish that would encompass the fairgrounds and the university) chose the name “Corpus Christi” for the host of the congress. The church was incorporated on Feb. 3, 1939.

The congregation began meeting at the Fireside Hall in the lower level of what is now Milton Square, and within five weeks the church had bought the property at Buford and Cleveland avenues, established a building fund, printed offering envelopes and bulletins, conducted children’s classes, started a choir and a women’s group, and held its first baptism. The church met at the Fireside Hall for two years and the first pastor was Father James Westfall, who was both parish pastor and chaplain to the university students.

The architect for the new structure was J.V. Vanderbilt of Minneapolis, the construction company was P.O. Nasvik and the cost was $45,000. The stone used on the outside of the building came from a demolished grade school in Stillwater and is now about 175 years old. The builders broke ground for the church on Aug. 21, 1940, and despite construction delays and striking workers, were able to hold the children’s Christmas program on Dec. 22 of that year. The first Mass was on Feb. 22, 1941.

When the National Eucharistic Congress convened on June 23, 1941, the church was able to help out in many ways. Congregants drove attendees (125,000 from all over the United States), served breakfast, lunch and dinner at the church, and helped find accommodations for some of the attendees. The conference was a rousing success, despite the rainy weather.

Corpus Christi was dedicated on Oct. 12, 1941, and now faced the task of raising funds to pay off the loan on the building. The church bought a space at the State Fair and served more than 15,000 meals in 1942. Other money-raising ventures over the years included Bingo games, card parties, spaghetti dinners and fall festivals. The church hosted Boy Scout Troup 48 and drew many students from the university, which added an international flavor to the congregation. By 1955, the church had 600 members.

Because there was no room to build a school near the church, members voted in September 1958 to buy property at Fairview Avenue and County Road B for a school and convent. The groundbreaking was held on Nov. 1, 1958, and the school opened on Sept. 8, 1959, with nuns from the School Sisters of Notre Dame as teachers. The first Mass was held in three classrooms on Oct. 11, 1959. For the next 33 years, liturgies were celebrated at both the Fairview Avenue and Cleveland Avenue locations, giving the parish the unusual distinction of having two buildings, two miles apart.

In November 1962 the school added a gym (used as a cafeteria, auditorium, stage and sanctuary where Mass was held), kitchen, locker and shower room, and storage facility to the Roseville building. Enrollment peaked in the 1963-64 school year, with 392 students in eight grades. But enrollment began to decline and the school closed in 1981; the nuns left and many students went to St. Rose of Lima School on Hamline Avenue in Roseville. The building was first leased to Minnesota Waldorf School in 1987 and is currently leased to Hand in Hand Christian Montessori School.

After a year-long study, the parish council recommended selling the church on Cleveland and building a new worship space at the Fairview Avenue property. A $1 million facility was constructed and the old church was sold to St. Andrew Kim parishioners on March 18, 1992. That building was subsequently sold to the Emily Program, which opened the Anna Westin House—a residential treatment facility for people with eating disorders—in 2010.

There were mixed feelings about the move from parishioners at both locations. It was becoming harder and harder to find parking at the Cleveland location and the basement bathroom was difficult for older parishioners to use, but it was hard for many to leave a place with so many memories. People at both locations wondered how they would merge into one congregation, but a symbolic procession on June 1, 1992, from the Cleveland Avenue location to the Fairview Avenue church brought them all together in one place literally and figuratively. The church remained one body.

Author’s note: Many thanks to the lovely women of Corpus Christi who helped me with this article: Carol Mulroy, Nancy Wenkel, Mary Meyer, Carole Mayers and Mary Zorn, and to the late Ann Bulger for her comprehensive history of the church’s first 50 years.