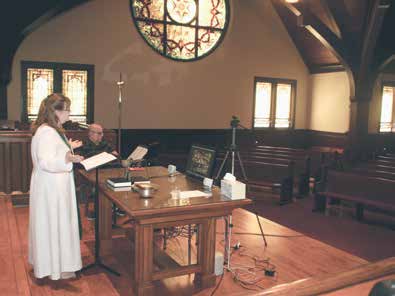 When a beloved member of St. Matthew’s Episcopal Church died in the spring, parishioners couldn’t safely visit the widow with food and comfort in this period of the COVID-19 pandemic.

So, they created a new ritual: They placed a vase outside her door and in the following days, stopped by to leave a stone, shell or scripture verse.

“Imagine this glass vase starting to fill and knowing all these people are thinking of you and praying for you,” said St. Matthew’s Rector Blair Pogue. “We’ve continued that tradition with others who have died. It’s painful not to hug someone who is grieving. But we’re trying to find ways we can symbolically wrap arms and hearts around people.”

COVID-19 has forced congregations to find new ways for everything—from the logistics of virtual worship to social times and pastoral care. It’s likely those changes will be in place for a while. When houses of worship shut their doors in March, many assumed that the need to physi­cally distance would last a few weeks, perhaps months. Now several neighborhood congregations say they do not anticipate gathering indoors for worship until 2021.

“Until all generations from young to old can gather safely it will be hard to imagine reopening our building in person again,” said the Rev. Jill Rode at Saint Anthony Park Lutheran Church.

Almost all neighborhood congregations have established some form of virtual presence. For Saint Anthony Park United Church of Christ it is “Zoom church.” On a recent Sunday morning, after the organ thundered the closing chords of the prelude, Pastor Victoria Wil­gocki stepped to the front of the sanctuary and greeted her flock. The pews were empty, but the faithful were present in rows of faces on a computer monitor propped on hymnals at the communion table.

“It’s greatest gift is that we gather all together at the same time on Sunday morning,” Wilgocki said about the video platform. “It’s in real time, we all share the same experience and we can interact with each other.”

Zoom church can be intimate, even creative. During worship, Wilgocki blessed a church member who was moving to Ohio, speaking directly to him on “speaker view” and then evoking the Holy Spirit by playing a short montage of wind chime video clips sent by church members. During a service in June, she interviewed each high school gradu­ate in the congregation and the congregation was able to listen as the young people described their gratitude and hopes.

Zoom worship is sometimes humorous. “I’ve seen people’s beverages and dogs, and little kids walk in and out,” Wilgocki said. Occasionally microphones get un-muted and the congregation hears someone saying “I’ve got to get more coffee” in the middle of a hymn. “It can lead to distraction,” she said. “But more often it’s really sweet and funny.”

The church also is hosting a variety of meetings on Zoom for, among others, parents, poets, Bible studiers and book readers.

Saint Anthony Park Lutheran Church has taken a different approach—prerecording weekly worship for people to watch whenever and wherever they want. The format has allowed the leadership team to record from unusual places including a backyard garden and the site of George Floyd’s death.

“The church is whoever the people are,” said Pastor Rode. “I think that’s a beautiful message that can be shared more prominently these days. You don’t have to come in this building to have worship experience.”

Rode’s church even holds monthly communion online. “We ask people to come to their couches with their bread and the pastor will say ‘the body of Christ given for you,’” she said. “Then there is a pause where we hope people at home can commune one another or themselves.”

Of course, many experiences cannot be replicated virtually. When longtime Pastor Glenn Berg-Moberg retired this summer, the planned farewell service couldn’t be held so members drove by his house in a parade of cars. The popular vacation Bible school was canceled. There is no choir or congregational singing.

“The choir has been a pretty poignant loss for many of us,” said church member and congregation president Bjorn Gangeness, who has sung tenor for eight years. “I miss it for the creative expression, but also being part of a group and singing together. It’s hard to have that all go away all at once.”

At the Church of Saint Cecilia, the loss of in-person worship presents additional challenges. The weekly Mass is recorded, but as a Roman Catholic congregation, parishioners cannot consecrate the bread and wine or serve themselves. This makes it harder for people to fully participate from home.

“That’s the hard part,” said pastoral associate and longtime member Marge Virnig. “I guess that’s one thing we’re still trying to talk about and figure out. Some parishes have the drive up communion, but that seems more like fast food.”

The congregation did hold in-person First Communion—each child came on a separate Sunday for Mass with only immediate family. “That’s been really personal,” Virnig said.

St. Matthew’s Episcopal Church has taken in-person worship the farthest. This summer it started holding Sunday morning worship across the street in College Park. Attendance is limited to 40 and people are asked to register, wear masks and remain physically distant.

On the first Sunday in August, people trickled into the park with folding chairs and settled in groups of two or three in a widely-spaced semicircle under the oak trees. Violinist and parish­ioner Emma Liu played “Be Thou My Vision.” Neighbors walked by with dogs and the thwack of tennis balls drifted from the nearby courts. It was a special service—assistant priest Maggie Nancarrow was presiding over Eucharist for the first time after being ordained. During communion, parishioners came forward one by one to pick up a plastic-covered paper cup filled with pita bread.

Pogue said she enjoys outdoor worship more than she anticipated. She likes being surrounded by birds and nature. And she likes being a visible part of the community.

“As I think about early Christianity, Jesus was on the move! Then we got these buildings and we became this stationary people. I feel like we’re supposed to be out in the neighborhoods. Our country is going through so much grief and so many crises, it’s just great to be out there and sharing God’s love.”

The congregation is finding other ways to stay connected. A few members delivered begonias to every member for Easter. A group meets virtually for Wednesday noon Bible study.

“I’m astounded at how many 80-year-olds were willing to learn how to Zoom,” Pogue said with a laugh. Another group meets one evening every week to discuss C.S. Lewis’ book “The Great Divorce.”

But in-person worship is perhaps the most precious.

“It’s been so awesome to see each other,” Pogue said. “I’m going to do it until it snows. I just think it’s so important for us to gather and be together.”

Maja Beckstrom is a writer/journalist who lives in St. Anthony Park.