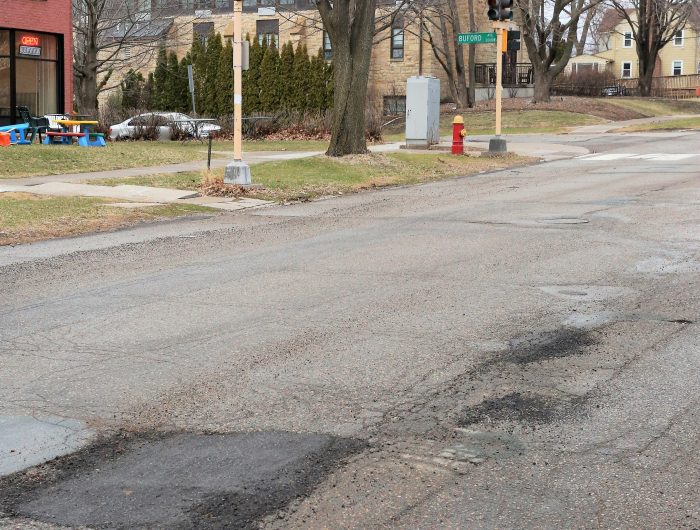 Cleveland Avenue between Como and Larpenteur avenues will be under construction for much of the next 18 months as Ramsey County updates sewer and water lines, repaves the road and adds a bike and pedestrian trail.

Construction in 2022 will focus on Cleveland Avenue between Como and Buford avenues. The remaining stretch to the north is scheduled for completion in 2023.

Cleveland will be closed from Como to Buford starting in late May and through fall. The street will be completely closed during that time, with major traffic detoured on Energy Park Drive, Highway 280 and Larpenteur Avenue.

The road will remain closed during Back to the 50s and other summer events at the Fairgrounds but will temporarily reopen during the State Fair in late August.

The first phase of the project was completed last fall, including gas lines and telecommunications networks. Water and sewer work will be done in tandem with road reconstruction.

When construction work is completed, Cleveland Avenue will have one driving lane in each direction. The county purchased right-of-way from the University of Minnesota in order to widen the sidewalk along the east side of Cleveland for a multi-use trail.

An interactive map on the county’s project website will be updated with closures and detours.

The map and other updates can be found at ramseycounty.us/residents/roads-transportation/current-roadwork/2022-road-construction-maintenance/cleveland-avenue-reconstruction.

That is also the place to report concerns about noise and other environmental nuisances associated with construction, county staff said.

Nicklaus Fischer, Ramsey County’s coordinator of the Cleveland Avenue project, acknowledged that drivers sometimes ignore posted detours, and that speeding and other traffic violations may occur. He said the county will work with St. Paul police to step up enforcement of traffic and parking violations.

Fischer said Cleveland Avenue will be completely closed for many weeks, with only minor temporary access allowed in special cases. A Cleveland Avenue resident who needs access for a moving truck, for example, might be accommodated, but residents and businesses should plan to use the alleys and side streets for all trips until Cleveland is reopened.

Further complicating traffic in the area for at least part of the summer, the University is also beginning work on its new Microbial Cell Production facility, the first of several new biotechnology labs planned for the St. Paul campus.

Sandra Cullen,  assistant director of Facilities & Transportation Systems said, “People will have to come into campus from the north on Cleveland to get to Buford Avenue and then can get to the southern part of the campus on Gortner.”

Cullen said the campus circulator bus routes will be detoured while Cleveland Avenue is closed. But as of early April, those plans were not settled. Ramsey County officials have said they are working closely with the University to minimize disruptions for students and staff.

Meanwhile, Metro Transit city buses will also be affected by construction. Route 87 runs on Cleveland up to Rosedale Mall. Metro Transit official Laura Baenen said in mid-April that she had yet to receive dates for the street’s closure, but that riders should consider signing up for alerts about route changes, available on the Metro Transit website at metrotransit.org/rider-alerts.

Fans of the Back to the 50s car show are encouraged to look for alternatives to their favorite lawn chair locations along Cleveland Avenue when the event occurs June 17 to 19 at the State Fairgrounds.