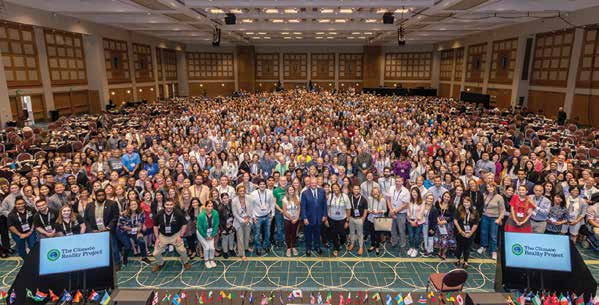 What has Al Gore been doing since that fateful day in December 2000? Well, as I found out early in August, he has been following his passion to do something about human-caused global warming and its climate-­changing effects.

After his denied presidential quest, Gore founded the Climate Reality Project to train environmental advocates to make the case for greenhouse gas reduction, based on the book and movie An Inconvenient Truth and its follow-up (visit InconvenientSequel.com).

After starting with small groups in the barn on his Tennessee farm, Gore’s training initiative recently came to Minneapolis for a three-day session, reaching 1,200 women and men from around the world. As well as learning to give Al’s climate talk, this crowd gathered to raise our activism prowess. By sharing stories, tactics, and strategies, we believe we have strengthened our effectiveness to combat the further rise of global temperatures and its negative effects on nature and our human society.

Our Upper Midwest climate is already changing fast, Al reminded us. This spring’s extensive and prolonged flooding on the Mississippi, Minnesota and Mis­souri rivers was caused by increased winter and spring precipitation from warmer, moister air in the Gulf of Mexico. Yes, our night-time winter temperatures are getting warmer, but that also lets invasive species survive our previously harsher winters. Future summers are not expected to be radically warmer, but there will be more hot days and longer heat waves that can affect plants and agricultural production.

One session was led by Project Drawdown (drawdown.org), a research organization that identifies the most viable global climate solutions, ranking their effectiveness at removing human-caused carbon dioxide from the atmosphere. There were also appearances by Gov. Tim Walz, the mayors of St. Paul (Melvin Carter) and Minneapolis (Jacob Frey), MPR meteorologist Paul Huttner, U of M professor Tracy Twine, and author Tom Friedman.

Transformation starts at the grassroots

To be clear, the earth has already warmed by 1.5°F since 1901, with the rate of warming doubling since 1970. If we don’t do anything, it is projected to warm to at least 3.6°F (2°C) by the end of this century. In order to not make things worse, we have to make massive, transformational changes to decarbonize our energy, transportation, agricultural, and commercial systems. This will not be easy, but it is necessary to pass a healthy and safe earth on to our children so they can live gently on the earth and in harmony with nature.

We have to act personally, on the regional, state, and national levels, and on the whole dang planet scale to stop the harm we are doing. Some suggestions:

• Eat lower on the food chain: It takes 1,800 gallons of water and seven pounds of feed to produce one pound of beef. A cow produces 65 pounds of methane-producing manure daily.

• Find energy efficiencies in your lifestyle; do the same with water and other finite resources you use. Reduce, reuse, repurpose, recycle.

• Stand up for the planet wherever you go; educate yourself and then speak up and fight for the goodness we can achieve together.

One opportunity is 24 Hours of Reality: Truth in Action, a web happening set for Nov. 20-21. For one full day, Climate Reality Leader volunteers trained by Al Gore will teach and lead discussions online and in schools, community centers, and workplaces across the country and worldwide.

Mike Lukes is a meteorologist now retired from federal service, most recently the National Weather Service. His roles ranged from upper-air test manager at the Sterling, Virginia facility to service hydrologist at the Weather Forecast Office in Grand Forks, N.D. He now lives in St. Anthony Park.