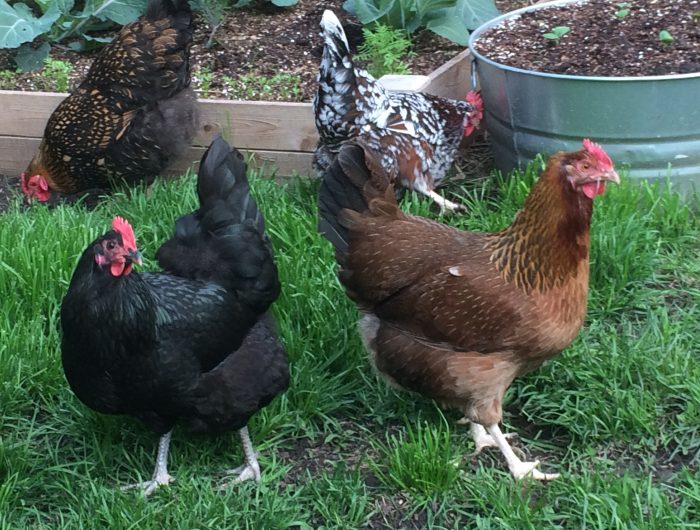 Fern, Maeve, Marguerite, Poppy, Violet and Willow are the names of the hens currently being raised by Como Park couple Elizabeth Carls and Tim Whitley.

Since 2018, when they built a chicken coop with the help of friends, Elizabeth and Tim have embraced this backyard hobby.

The original idea to have chickens stemmed from Carls’ employment at EggPlant Urban Farm Supply, a St. Paul retailer located on Selby Avenue. She was already interested in gardening and urban agriculture, so raising and keeping chickens seemed like a logical extension to these pursuits.

Permission of the neighbors is not required in order to have up to six hens in St. Paul, according to the St. Paul Department of Safety and Inspections website. Adjacent neighbors must be notified in writing in lieu of permission and an annual inspection is required. Roosters are not permitted.

Each of the hens is a distinct heritage breed. Several criteria must be met in order to qualify for this designation, including a traceable lineage, the ability to thrive outdoors and a slow growth rate, according to the Heritage Poultry Conservancy website.

These chickens look nothing like typical farm chickens. Instead, they are quite striking with richly colored feathers. The breeds were thoughtfully selected by Carls based on the colors of their eggs. Day-old chicks are available at a cost ranging from $7 to $18 at EggPlant, Carls said.

Supplies and books may be purchased at the store, which also offers classes in chicken keeping. The 3,000-member Facebook group Twin Cities Chickens is an excellent forum for information and ideas, she added.

Raising chickens is similar to caring for other types of pets, and caring for the hens is fairly easy, Carls said. The effort involved is similar to having a cat, as the hens can be left alone for a day or two as long as they have plenty of food and water, she explained.

None of their neighbors have had any concerns about their chickens, Carls and Whitley said. In fact, the neighbors love the chickens, they added.

One of the neighborhood children was even inspired to wear a chicken costume for Halloween, Whitley mentioned. Although the hens cluck, they are fairly quiet.

During the months with abundant daylight each hen will lay an egg nearly every day. However, during the shortest days of winter, only a few eggs will be laid each week by the entire flock.

Carls makes good use of the collected eggs as she enjoys making quiche and frittatas along with baked goods. In January and February, she will periodically need to buy eggs at the grocery store, which is not nearly as satisfying as gathering eggs from her own hens in the backyard, she explained.

Despite their prolific egg production, the chickens do not pay for themselves. However, it is less expensive to have hens than either a dog or cat, Carls said.

When asked about the downside of raising chickens, Carls said there are few negatives. Some coops may have fly infestations in the summer and avian flu can be an issue.

Summer heat can be dangerous for the chickens, whereas the colder temperatures in winter are easier for them to handle. Radiant heat is provided in the coop when temperatures fall below zero degrees.

The hens are often allowed to roam freely in the fenced backyard when Carls and Whitley are outside.

“There is nothing more relaxing than sitting out here and watching them,” Carls explained. “They have more personality than you would expect,” Whitley added.

For further information, go to eggplantsupply.com.

Janet Wight is a regular freelance writer for the Bugle.