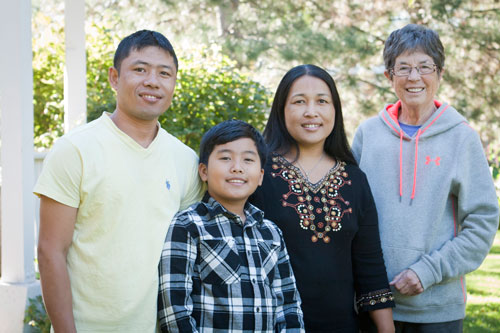 Coming to America: A refugee story

We read about them in passing, or see their weary faces trapped momentarily in the lens of a news camera. Armies of political refugees are on the march across the map of Europe this year. Their numbers are greater than at any time since the end of the Second World

Ram, Nidesh and Devi Rana and neighbor Carol Mulroy have formed close relationships since the Ranas came to Minnesota in 2009. Photo by Lori Hamilton

War. Far away in Minnesota, many of us react with a quick pang of sympathy and perhaps a resolution to send a check.

For Ram Rana and his wife, Devi, of St. Anthony Park, however, the understanding goes much deeper. The Ranas are Lhotshampas, ethnic Nepalese whose families had lived for generations in villages as minority inhabitants of the neighboring country of Bhutan. As children, Devi and Ram fled into exile with their families when the Bhutanese government attempted to suppress their language, their national dress and their culture.

“I was 9 years old when I left,” says Ram, 34, speaking in the hard-won tones of American-style English that he picked up after he arrived in the United States. “Our parents want democracy in our country. We lose our national identity.”

They spent the next 19 years in refugee camps in Nepal. “Refugee life is miserable life,” says Ram. Although they lived in relative safety in Nepal and attended school in the camps, they were not allowed to begin new lives. As stateless people, they lived in a state of suspended animation, sequestered in the refugee camps, while many among the older generation hoped someday to be allowed to return to their native villages.

For Ram and Devi, who had met and married in the camps, it was different. Especially after their son, Nidesh, was born in 2005, they became increasingly interested in the possibility of resettlement in a third country. The option was made possible through the bureaucratic machinery of the office of the United Nations High Commissioner for Refugees; but there was one huge obstacle: “We have to go by ourselves. I never left my family ’til now,” explains Ram. He had learned rudimentary British-style English in school in the refugee camps, but, he says, “Our parents know zero English.”

Ram and Devi were encouraged by the example of Devi’s adult niece and her husband who had already gone ahead to Atlanta, Ga., where the husband had a job. Finally, in 2009, the couple and Nidesh said goodbye to 15 relatives in the Nepali refugee camp and boarded a plane for what they thought would be a new life in the American South.

And that’s where their story took a turn for the bizarre. On Oct. 7, 2009, they landed in Miami, Fla., wearing badges printed with the address of their new home. They were told that the connecting flight to Atlanta would be short, but in fact it was three hours before they reached their final destination. Worse was to come, says Ram.

“Our caseworker wasn’t there. We didn’t know where to get our bag,” he says. In his far-from-fluent English, Ram asked an airport security guard for help. Several phone calls later, a pair of volunteers showed up and drove the little family to what they believed was their new Atlanta home. It was late at night, they were exhausted, and their ignorance was total.

“It was first time we ever saw a refrigerator, electricity, American food,” says Devi. “[The volunteer] said, ‘This is food for one week.’ She gave us bus cards, but where is bus? How to use card?”

Ram takes up the story: “They left and said, ‘We’ll be back after a week.’ But my son is hungry.” Somehow the trio struggled through their first couple of days, making the best of the unfamiliar surroundings and strange food but afraid to leave the apartment. Two days later, there was a knock on the door.

“We feel scared,” says Ram, “so we didn’t open.” The footsteps retreated but then returned. Only when Devi heard her niece’s voice, did they feel confident enough to open the door to the greater world.

And that’s when they found out that they hadn’t come to sunny Atlanta after all, but to the chilly and unfamiliar land of Minnesota, where winter was rapidly closing in.

Devi’s niece explained that her husband had been transferred to Minnesota only days earlier and the authorities had taken special last-minute care to ensure that the extended family could remain together in the United States. But no one had informed the Ranas.

Ram and Devi still don’t know exactly where in the Twin Cities they spent their first days, but soon enough the little family relocated to St. Anthony Park, where thanks to a good neighbor, they were able to begin to recreate the warm ties of family that they thought they had left behind. Carol Mulroy lives by herself directly across the street from the Ranas near Alden Park.

“One lucky day we met Carol,” Ram says. “She is my gift of God. We were new here like a baby and Carol knows [how to do] everything!”

For her part, Carol says, “[They] help me with anything I need help with. Ram is muscle and brains. His boy plays with my nephews; it’s just like a family.”

Ram is grateful for the help he received from St. Anthony Park Lutheran Church when he first came here, but he emphasizes, “Carol is my family.”

And she’s not the only one. The Rana family in Minnesota has been growing. In the six years since they arrived, Devi and Ram have welcomed the arrival of at least 10 members of their extended clan from the refugee camps in Nepal. Other Bhutanese families have also arrived, all settling within a few blocks of the Ranas.

When the Ranas arrived, they found both the American language and their own prospects problematic. “It’s very hard to find job in the beginning,” says Ram, who now works for an office-cleaning company. Things have improved, but Ram is realistic. “I knew if we go [to America] our life will be OK, but our kid’s life will be better,” he says.

Nidesh, now a fourth-grader at St. Anthony Park Elementary School, is flourishing. “He exceeds all expectations,” interjects Mulroy proudly. And his father says, “He’s all American.”

But his father hopes he won’t forget where he came from. When asked what he would tell grandchildren as yet unborn about his long journey to his new life in Minnesota, Ram responds, “They will say, ‘I’m American.’ But I will tell them, ‘Don’t forget Bhutan and your language Nepali.’ ”