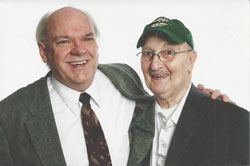 A few months ago, we had to summon an ambulance to our house. My wife, Renee, had a sudden back pain—caused by an infection, as it turns out—that left her screaming whenever she moved in any direction.

Sixty years ago, ambulances were made out of station wagons. They slapped a couple of lights on the roof, stuck a gurney inside it and wrote “ambulance” on it and that was pretty much it. Not so today. This vehicle had more lights than the Ginza, all of them strobing to save their lives (or, actually, someone else’s life). It was huge, blocking off our entire street. Four paramedics piled out of it and ran into our house. If it sounds as if I’m decrying this as excess and overkill, I’m not: We were glad for this big dramatic unequivocal vehicle and, once they had literally knocked out my wife with fentanyl, three of them carried her and one opened doors.

At some point in this terrible scene, I wondered—in the strange and inappropriate kind of thought one often has in the midst of trauma—what the neighbors were thinking. I’m sure the ones who know us thought, “Oh, no! What’s wrong with Adam and/or Renee?!” But, to the half of the neighbors who don’t really know us, I imagine we were “that old couple,” as in, “What’s going on out in the street, honey?” “There’s an ambulance. It’s that old couple on Blake Avenue.” “Oh.”

Now, I’m guessing that more old people are hauled around in ambulances than young, and isn’t that the way we want it? An octogenarian’s death is not a tragedy; a teenager’s is. But it gives me pause to realize that Renee and I are now in what I’ll call the senior demographic. I mean, we’re not really old—I’m barely 67 and Renee is nearly a year younger, for gosh sakes—but numbers don’t lie and there we are. I’ve lived in eight decades, and on paper that begins to look a lot like that octogenarian whose passing we were observing a few lines ago.

Of course, as with all age groups, there are healthy and unhealthy seniors, and I like to think we fall into the former category. Plus, we’ve got genes on our side. With a few dramatic exceptions, our forebears regularly made it into their late 80s and above, an attribute from which we benefit but for which we can claim no credit. The upshot is that, in actuarial terms, Renee and I should have a couple of decades of reasonably good life ahead of us.

She spent five days in the hospital while doctors/hospital staff got the infection under control. Simply being in a hospital makes one look 10 years older, and you can tack on another seven if you’ve got tubes and wires sticking out of you. So, Renee, who normally looks 15 years younger, actually pretty much looked her age lying in her bed at Regions.

Please know that I’m not making light of aging and dying. I have just come from visiting my old friend Larry Cohen for the last time. Larry was mayor of St. Paul in the early ’70s and lived a good, long, productive, worthwhile life. A great guy. I was one of 100 friends who visited him in his hospital bed in his living room, and his children and grandchildren were all there as well. He had a good send-off—equity drawn on a life well-lived.

I met Larry 10 years ago when I started attending monthly dinners as part of an Old Farts group. There are about 10 of us, all men, but it’s not a “men’s group.” When the group started, I was the youngest member. Now, several deaths and a few new members later, I fall somewhere in the middle age-wise.

Renee and I had just returned from a Prairie Home Companion cruise to Alaska, for which I was hired as a musician. There were 1,200 passengers, and the median age was probably 68. I was encouraged to enter a contest to write a song relevant to our journey, so I wrote “The Voyage of the Octogenarian,” from the comic opera “The Pirates of Dependzance.” In the song, the pirates attempt to raid another ship, The Princess, but are rebuffed with laughter by her all-female crew.

I won the contest, and the $500 that came with that win was good money and covered our trip incidentals, but what I really got from the experience was a catharsis. For those three-and-a-half minutes, I was that octogenarian pirate, cursing the loss of his supply of Dependz over the side of the ship while looking resolutely through the wrong end of his telescope.

Adam Granger lives in St. Anthony Park with his wife and dog, Molly, and is a regular contributor to the Park Bugle.