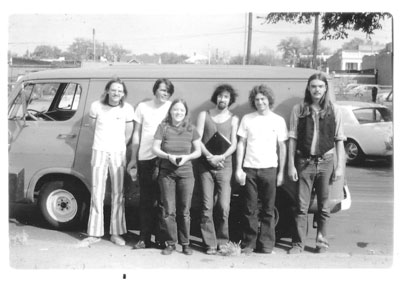 The band Green Corn hits the road from Norman, Okla. The guy in the pants? Adam Granger.

We’re midway through the summer travel season, and while families have been piling into their minivans and heading for Grandma’s or to the cabin, we professional musicians have been loading gear into a motley of conveyances and heading out, well, everywhere. (My 2014 summer schedule has included two trips into Canada and a flurry of southern gigs with a bluegrass trio, then a return to St. Paul for the 40th anniversary Prairie Home Companion celebration and broadcast. In August, I’ll fly out for the Prairie Home Companion Baltic cruise, and for the summer of 2015, I’m booked in Belgium, Germany and Switzerland.)

In honor of this season of maximal peripatetics, I offer a reminiscence of half a century of getting to and from the gig.

My earliest experiences were in the Coachmen, a pre-Beatles Oklahoma-based rock-and-roll band whose rhythm guitar player had his license and drove us to gigs, and in the “official” Norman (Okla.) High School folk group, which traveled around the state and played Kiwanis lunches and such, ferried by a parent or two.

After high school, what I’ll call my adult musical career began, a career in which I’ve run both the gamut and the gauntlet in the quality-of-travel department. The goal of travel is to get to the gig on time, with the stuff you need, in relatively good shape, by whatever hook or crook. Anyone who has traveled as a musician knows that being on stage is the easy part. The rigors of getting there require good health, a level of stamina that is hard to imagine if not experienced, an agreeable disposition (even when tired, sick or stressed), a knack for sleeping anywhere for any length of time, the ability to give your best performance in a disquieting salmagundi of inclement circumstances, and—critically—an understanding and supportive family.

I first hit the road in an improvised Volkswagen Beetle camper: I removed the back seat and modified the passenger seatback so it could be laid flat, thus creating, amazingly, a 6-foot bed. I put in curtains, a Coleman stove and an ice chest and I was off. This vehicle served me faithfully through gigs in Arkansas, Tennessee and Missouri. (I’ve never seen another one of these and wonder why no one else ever thought of it.)

In 1971-72, working out of Nashville, I toured with comedian Chance Fallon as part of the Marvin Muffknuckle Revue. We played venues in this neck of the woods: the Best Western in Fort Dodge, Iowa; the Starlite Inn in Marshalltown, Iowa; the Holiday Inn in Pierre, S.D., and the Hondah Lounge in Miller, S.D. (where we stayed in the Virgil Lips Hotel, owned by a fellow named, you guessed it, Virgil Lips). We were like carnies, traveling in a caravan of beat-up old vehicles, and I roomed with the drummer, a diminutive recreational shoplifter from North Carolina whom we called Moose. We were on the road so long that I finally gave up my apartment in Nashville because I was never there.

Shortly after I moved to Minnesota in 1974, Garrison Keillor started his radio show and hired me to play in the Powdermilk Biscuit Band. We toured twice a year, in vans and rental cars, with the two engineers trailing in a box truck. We eventually graduated to a motor home, which was a real improvement, except that it generally housed way too many people. (I remember one tour that included the four-member band, Keillor, his producer, Sean Blackburn, Butch Thompson, Claudia Schmidt and Bill Staines. We were stacked on top of each other, and not in any fun way.)

When the Powdermilk Biscuit Band played side gigs in the late ’70s, as we often did, we traveled in a 1971 Chevrolet Kingswood station wagon. It was a wonderful road vehicle: With a 400-cubic-inch engine and three rows of seats, it could haul four or five of us, two guitars, a string bass, a fiddle, a mandolin, a jug, a banjo and our sound system in relative comfort in all kinds of weather.

In the ’80s, in a duo called The Eclectic Brothers, I traveled the Midwest in a Honda Civic, flying only rarely. These days, I drive if at all possible, because I’ve got to take my guitar, a suitcase (including performing clothes), a sound system, teaching material (if a seminar or workshop is involved) and CDs to sell. Regrettably, Amtrak cannot be relied upon—a rare exception being the Seattle to Portland run, which is fast and punctual. I’ve driven to the American and Canadian coasts many times and north and south dozens of times. And the logistics of touring Europe absolutely require car rental (on a 2001 tour of Great Britain, mandolinist Dick Kimmel and I played both coasts of Scotland on the same day).

Nowadays, the Prairie Home Companion entourage generally flies to shows, and all transportation is arranged by PHC staff; one just has to show up at the airport. Occasionally, chartered buses are used for short hauls, as for a show we did in Glenwood, Minn., a few years ago. And 10 years ago, Keillor and a few of us musicians flew in a borrowed corporate jet to Bayfield, Wis., to do a couple of shows at the Big Top Chautauqua. When we flew out that night after the shows, an airport employee drove a pickup truck down the runway ahead of the plane to scare off any deer that might have been in our path.

As one might guess, the PHC cruises are the best of the best: How else would a professional folk musician get to see Estonia, or St. Petersburg, or Monaco? And, as a performer on a ship with a thousand adoring Keillor fans, I at long last get—albeit by association—the respect and adulation I so richly deserve.