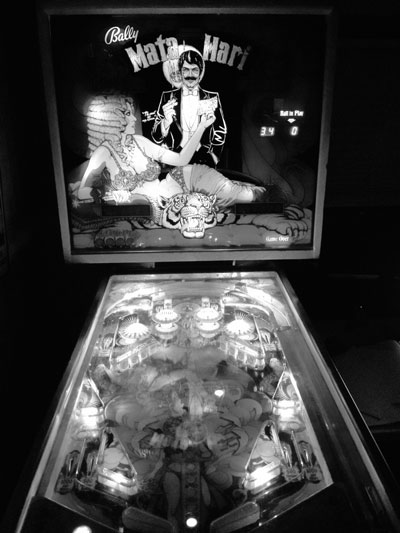 Throughout my adult male life, I’ve entertained the notion of owning a pinball machine, but there have always been impediments against getting one—purchase cost, space needed and expense of maintenance paramount among them. Thus did the pinball-acquisition dream languish on my bucket list (the other two items include my plan to run for Congress and my dream of opening a mambo studio). No pinball machine for Adam.

Until, that is, one August evening, when I returned home to find my 38-year-old son, Ben, playing pinball in my garage. Happy birthday, Dad! He had bought me a “pin” (as aficionados call it) and, mind you, not some Smurf-themed tabletop battery-operated toy, but a real, 6-foot-tall, 300-pound pinball machine. And not just any pinball machine, but my favorite of all time (a fact which I apparently had revealed to Ben in a prior conversation).

My son buying me this machine—a 1977 Mata Hari made by the Bally Manufacturing Co. of Chicago—isn’t quite the random act of kindness it seems. He’s a tournament pinball player who has been ranked first in Minnesota for most of the last two years. He and his girlfriend, Jackie, travel to compete nationwide. Jointly, they own 12 machines. (When I first met Jackie, I asked if she was as into pinball as Ben was. She held up her arms to reveal flippers tattooed on the undersides of her wrists.)

Pinball reached its peak of popularity in the three decades preceding the proliferation of video games in the mid-’70s, after which it ebbed but never quite disappeared. There are currently only two companies making pins, but there are, of course, hundreds of thousands of machines still in good nick out there. One of the larger agglomerations in the Twin Cities can be found at Blainbrook Bowl, in Blaine, which hosts regular tournaments played on some 50 machines. Private holdings dwarf that figure, with hundreds of pin owners scattered through the metro area alone. One collector in a western Twin Cities suburb owns more than 100 machines, all in working order. Closer to home, several St. Anthony Park residents own pins, including my neighbor, who has a Bally Eight Ball Deluxe.

So there was Mata Hari, sitting in my garage. Acquisition realized. For the nonce, it was fine where it was (and who uses their garage to keep cars in, anyway?), but winter was looming, and I didn’t need to be Enrico Fermi to have a good sense that pinball machines and subzero temperatures don’t mix. Miraculously, the 21-square-foot space needed was created by reconfiguring one of our upstairs rooms (and, no, it wasn’t our bedroom). I removed Mata Hari’s legs and back box (the upright section where the scores are shown), and Ben and I humped everything into the house and upstairs, just ahead of Old Man Winter.

While reassembling Mata Hari, I inserted Tab A into Slot C, as it were, and ended up with a dead machine. Enter the third original impediment to pinball acquisition: cost of maintenance. There’s a guy in the metro area, Bill, who is the go-to guy, and he stays very busy. Not only is he the tech for Blainbrook Bowl, but also for dozens of guys like me who have pins in their homes. (I should have mentioned earlier, although it probably goes without saying, that pinball is mostly a guy thing.)

Bill cut his teeth working in the ’60s and ’70s at Rifle Sport, which longtime Twin Citians will remember as one of the more colorful establishments in that era along Hennepin Avenue in downtown Minneapolis. As an employee there, he taught himself how to fix pins and video games and today, in 2016, he charges $100 to walk through your door. The man is a pinball genius, and he’s worth every penny. He figured out, in short order, that I had inserted a connection backward while reassembling the machine and, that corrected, Mata Hari was back in business.

The prohibitive cost of hiring the Bills of the world compels most pin owners—myself included—to becoming bespoke repairmen and, in truth, most things that go wrong with pinball machines are simple fixes: short circuits, cold solder joints, dirty contacts, burned out bulbs and the like.

From a pure curiosity standpoint, pinball machines are amazing creatures, their insides being every bit the works of art that their outsides are. Perforce they are completely handmade, with a thousand solder joints connecting a half-mile of wiring to 20 coils, 40 switches and more than 100 lights. I ordered schematic diagrams for my machine (themselves hand-drafted works of art), a few pin-specific tools, dusted off my multimeter and now I’m set. I’ve thus far been able to fix everything that’s gone wrong—and make no mistake, things regularly go wrong with a 40-year-old pin.

OK, so, I can remove pinball machine acquisition from my bucket list. Now it’s time to get going on that congressional campaign and that mambo studio.