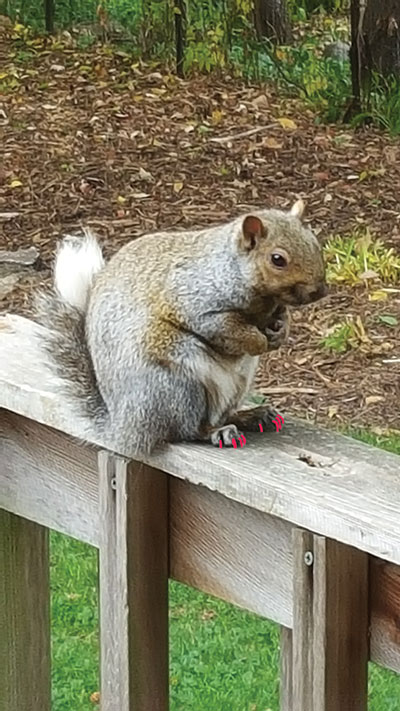 If they can break into the TCF Bank Stadium during a Vikings game we’ve got big trouble. I would think that a bank who paid for a fancy stadium label would tighten up security or at least lock the doors. Maybe they’re focused on better lending practices. I hope the new Vikings stadium with the 60-foot US Bank logo and the crooked roof has no squirrel encroachment. Those are pricey seats.

The squirrels here in St. Anthony Park have evolved to the point of having no natural predators. Decades ago it was an Oldsmobile with bad brakes or a tipsy Good Humor man who flattened Bullwinkle’s sidekick. With natural selection, the early street survivors learned by looking both ways before crossing four lanes of Snelling Avenue and shared that key information with their offspring.

Squirrels rank in the food chain somewhere below hawks and owls. Unfortunately, these winged predators are less than interested in our city squirrel pack. Hawks and owls much prefer to hang out at the Raptor Center with the Gopher co-eds. Raccoons, bobcats and foxes don’t want to be classified as invasive like our carp. No weasels found here in St. Paul, as they tend to prefer the climate on Capitol Hill.

So it’s squirrel city here, and I’m guessing a six-to-one ratio, squirrels to humans. Lock up your peanut cabinet.

Back where I spent summers south of the Mason Dixon line, squirrels were people food. Locals still shoot squirrels there. They say if you smother them with enough Shake ’N Bake it tastes like chicken.

The squirrels here are different from their country cousins. These varmints canvas the state fairgrounds for deep-fried discards, loading up for winter’s fury. The result is a furry brick barely able to scale a tree, sort of a guinea pig in a squirrel suit.

As domesticated city dwellers, they will all but snatch a Twinkie from the death grip of an 8-year-old. The squirrels in my yard have devoured every bulb I’ve planted. They watch me patiently and wait till I’m headed for the watering can. Whistling a tune with purpose in my step, I return to a previously planted bed that now resembles a monster truck track. My flowerpots and window boxes end up with expensive, free-range potting soil tossed against a neighbors’ lawn gnome. If the squirrels can’t find enough bulbs, seeds or nuts on the property, they chew on the teak patio furniture or my recycling bin. On Halloween, we can’t even leave a cleverly carved pumpkin out on the front stoop without the entire face eaten off.

The self-appointed leader of our yard pack is aptly referred to as “Bunny Squirrel.” He’s built like a small kitchen appliance and missing half his tail with a 30-pack of attitude. His stub is finished with a cotton ball tuft of fur, hence the title. He’s been a resident of St. Anthony Park as long as I have.

The average age of the gray squirrel is between 11 to 12 months, according to the Smithsonian National Museum of Natural History. Despite this brief life expectancy, some free-roaming gray squirrels have actually surpassed 10 years in age. Lovely.

Last winter I planted some East Coast acorns in about 37 indoor pots. It encroached into our already intimate dining space, but this project superseded ambiance. They soon sprouted into cute little baby oak trees screaming for a spring planting. I prescribe to the model of replacing every lost tree with two. If you know anything about photosomethingsis, it helps with the air quality and with the added foliage, my neighbors can’t witness my quirky daily routine.

Keenly aware of Bunny Squirrel’s motives, I moved and covered the pots outside with a steel outdoor fire pit grate. A little time under this steel cage and I’d transplant my trees to their permanent plot. Approximate weight of the grate, 12 pounds.

I’ll admit it was a clean job and the manhole-size grate was hardly moved. I should have set a motion camera. Was it him? The pots and dirt were left intact, but my seedlings were gone. I snuck a glance upward and there was Bunny Squirrel staring down with a smug look from the old pine above.

I decided he wouldn’t break me. I still had a bag of sprouting acorns left.

Now sacked behind the line of scrimmage, I’d start them in the old whiskey barrel planter out back. The heck with her geraniums and I hate deadheading anyway. I quietly snuck outside with my bag of acorns behind my back, set them down next to the barrel and marched off in search of a trowel. Walking back from the garage, my eyes locked on my ziplock with the remaining treasure trove of acorns being dragged up the tree by Bunny Jerk.

Not thinking, I gave chase and foolishly ditched my weapon, the trowel. In hot pursuit, I never lost sight of that arrogant ball of cotton. With Top Gun precision I fired with the only thing I had available to knock the last of my prized acorns loose. My hat. It was a direct frayed brim hit and for the moment I was Dundee with a boomerang. Down came the bag and my yard smelled of victory.

Not really. I don’t remember what became of those acorns. Perhaps I put them in the ground somewhere, but deep down I knew those acorns would never stand a chance against this army.

Despite what some residents claim, squirrels are not pets. They pretend to be injured or dehydrated and lure you into pricey rehabilitation. After being welcomed into the home they will rob you blind and turn the other house pets against you. Above and beyond all the thievery, they’re hoarders. Worse than late-night TV show hoarders. I’ve stepped outside in the morning and popped the car hood to check the oil to find 300 cleanly shelled and sorted walnuts in the engine air filter.

Is the closest walnut tree over by Gibbs Farm?

Squirrels are forever transporting small pieces of paper and twine from yard to yard. I don’t think they’re nut inventory lists. They must be the manufacturer instructions on how to open my bird feeder.

Barry Buckley resides in St. Anthony Park with his wife plus two surrounded by …